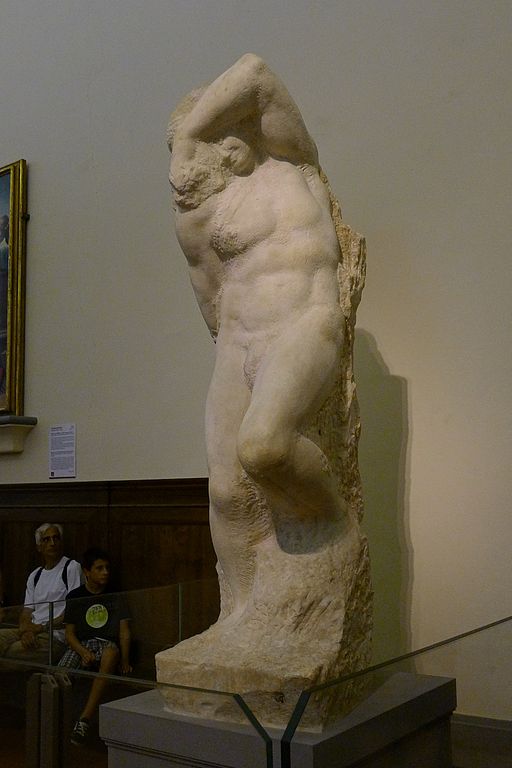 “Young Slave” by Michelangelo is a marble sculpture that started about 1525–1530. It is part of the “unfinished” series of prisoners called “Prigioni” in Italian “intended for the Tomb of Julius II.

The first version of the tomb of Julius II had a series of prisoners planned for the lowest level of the mausoleum.

It was to be a series of more-than-life-size statues of chained figures in various poses, leaning on the pilasters which framed a set of niches, each of which would contain a “Winged Victory.”

The Young Slave was sculpted in the 1520s in Florence. His knees are bent as if bearing an enormous force on his back. His left arm is raised to cover his face, and his right arm is behind his back, held by a chain that is not visible.

This figure is among the more completed of the group at Gallery of the Academy of Florence and shows a clear definition in his legs, torso, especially on the left-hand side and his arms.

His hands and head are less worked, while the back is entirely unsculpted. The whole surface gives clear traces of the chisels and scrapers used in the sculpting process.

Because of its unfinished state, the figure connects to a primordial act of liberation from its prison of rough stone in an epic battle with chaos. Art historians debate the meaning of the Prigioni sculptures.

The statues of the “Dying Slave” and the “Rebellious Slave” were finished but not included in the monument in its last and reduced design and can now be seen in the Louvre.

Another figure intended for Pope Julius’ tomb is “The Genius of Victory,” now in the Palazzo Vecchio in Florence.

The other sculptures for the tomb, the “Young Slave,” the “Atlas Slave,” the “Bearded Slave,” and the “Awakening Slave,” are displayed at the Gallery of the Academy of Florence

The Tomb of Pope Julius II is a sculptural and architectural ensemble by Michelangelo and his assistants initially commissioned in 1505 but not completed until 1545 on a much-reduced scale.

The tomb was installed in the church of San Pietro in Vincoli on the Esquiline in Rome after the Pope’s death.

As initially conceived, the tomb would have been an enormous structure. This project became one of the great disappointments of Michelangelo’s life when the Pope interrupted the commission, and the funds were diverted to other projects.

The original plan called for a freestanding, three-level structure with some 40 statues. After the Pope died in 1513, the project’s scale was reduced to a simple wall tomb with fewer than one-third of the figures initially planned.

The most famous sculpture associated with the tomb is the figure of Moses. Michelangelo felt that this was his most lifelike creation.

Legend has it that he struck the right knee commanding, “now speak!” upon its completion. There is a scar on the knee. Was this the mark of Michelangelo’s hammer?

Michelangelo was an Italian sculptor, painter, architect, and poet of the Renaissance who was born in Florence and had a monumental influence on Western art development.

He is one of the greatest artists of all time. He is often considered a contender for the title of the leading representative of Renaissance man and his rival, Leonardo da Vinci.

Michelangelo: A collection of Sculptures

“I saw the angel in the marble and carved until I set him free.”

“Trifles make perfection, and perfection is no trifle.”

“Many believe – and I believe – that I have been designated for this work by God. In spite of my old age, I do not want to give it up; I work out of love for God, and I put all my hope in Him.”

‘Trifles make perfection, and perfection is no trifle.”

“It is necessary to keep one’s compass in one’s eyes and not in the hand, for the hands execute, but the eye judges.”

“If you knew how much work went into it, you wouldn’t call it genius.”