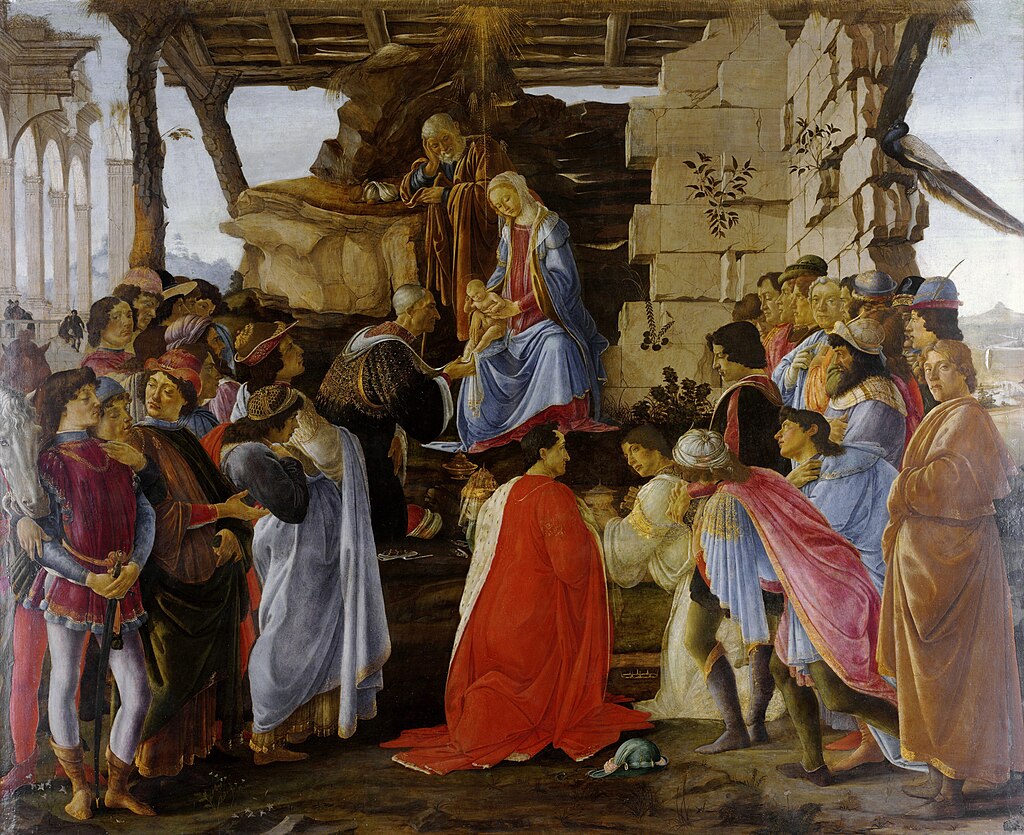 “Adoration of the Magi” by Botticelli

The “Adoration of the Magi” by Sandro Botticelli is based on the traditional subject of the Nativity of Jesus. It shows the three Magi, who found Jesus by following a star and then laid gifts before him and worship him.

“On entering the house, they saw the child with Mary, and they knelt and paid homage to him.
Then, opening their treasure chests, they offered him gifts of gold, frankincense, and myrrh.”

In this painting by the Italian Renaissance master Botticelli, there are many more people present, and the scene is dominated by members of the Medici family and their close friends.

This canvas was painted in 1475, and it is one of at least seven versions of “The Adoration of the Magi” created by Botticelli and one of the earliest in his career.

Inserted in the painting are portraits of three generations of the Medici.

Cosimo de’ Medici, the first member of the Medici political dynasty, he is kneeling in front of the Virgin as the first of the Magi.

Cosimo’s son Piero, who became the de facto ruler of Florence from 1464 to 1469, is the second of the Magi kneeling in the center with the red mantle.

Cosimo’s son Giovanni, an Italian banker and patron of arts, is the third of the Magi who is in the white and gold mantle kneeling next to his brother Piero.

Cosimo’s grandson, Giuliano, was a co-ruler of Florence and was assassinated a few years after this painting.

He was killed by a sword wound to the head and was stabbed 19 times. Giuliano is in the black mantle with red trimming standing up next to Giovanni.

Cosimo’s grandson, Lorenzo de’ Medici, who was the de facto ruler of the Florentine Republic. He was the most powerful and enthusiastic patron of Renaissance culture.

Lorenzo de’ Medici was known as Lorenzo the Magnificent; he was a wealthy diplomat, politician, and patron of the arts. Lorenzo is the figure on the far left next to the white horse.

At the time that this painting was painted, the three Medici portrayed as Magi were all dead, and Lorenzo effectively ruled Florence.

Also, Botticelli is alleged to have made a self-portrait of himself as the blonde man with a yellow mantle on the far right.

Botticelli was an Italian painter of the Early Renaissance who belonged to the Florentine School under the patronage of Lorenzo de’ Medici.

His mythological masterpieces are his best-known works today. However, he painted a range of religious subjects and portraits.

He and his workshop were primarily known for their many beautiful Madonna and Child paintings. He lived all his life in the same neighborhood of Florence.

His only significant time elsewhere was the few months he spent painting in Pisa in 1474 and his work at the Sistine Chapel in Rome in 1481–82.

Lorenzo il Magnifico became the head of the family in 1469 and was a great patron of both the visual and literary arts. The Medici family patronized Leonardo, Michelangelo, Machiavelli, and Galileo.

Adoration of the Magi

Dissecting Botticelli’s Adoration of the Magi

A Tour of the Uffizi Gallery

Sandro Botticelli: Adoration of the Magi, Art For Epiphany

Adoration of the Magi by Botticelli

A Tour of Rome Museums and Historical Sites

The Adoration of the Magi – Three Botticelli Pictures