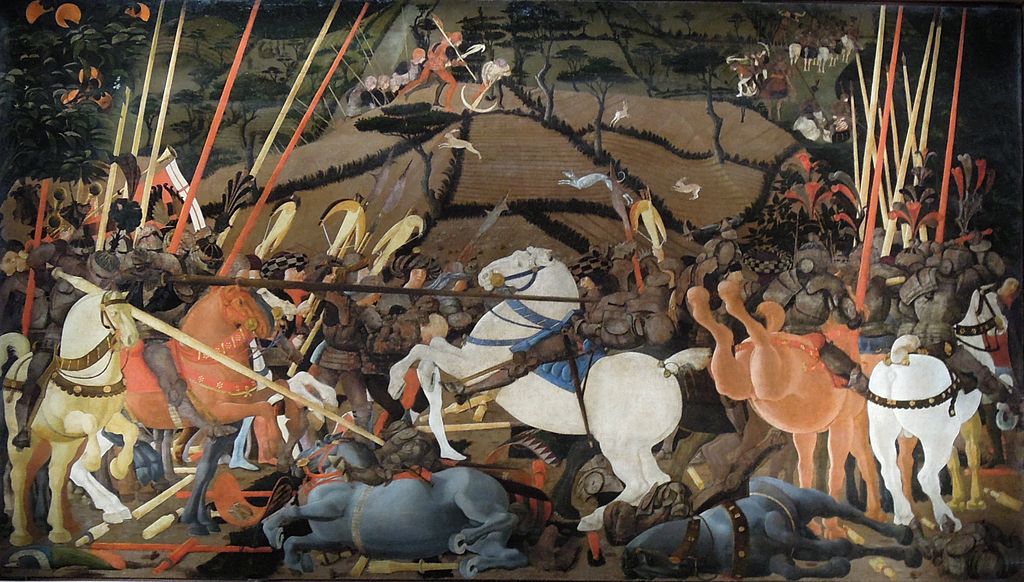 “The Battle of San Romano” by Paolo Uccello is a set of three paintings depicting events that took place at a battle between Florentine and Sienese forces in 1432.

This painting is exhibited at the Galleria Uffizi, Florence, and the other two companion paintings are shown at the National Gallery, London, and the Musée du Louvre, Paris.

The three pictures were designed to be hung high on three different walls in one large room, and the perspective was created for that purpose, which accounts for anomalies in the perspective when viewed at standard gallery height.

This panel was designed to be the central painting of the triptych and is the only one signed by the artist. The sequence most widely agreed among art historians is The London panel, followed by the Uffizi and then the Louvre panel.

In the foreground, broken lances and a dead soldier are aligned to create perspective. Painted with a view similar to that of a tapestry, the landscape rises up in the picture rather than receding into the background.

The illusion of a backdrop resembles a stage, and war is depicted as a theatrical event.

The painting incorporates gold leaf in the decorations of the harnesses, which has remained bright. Unlike the silver leaf that was used on the armor of the soldiers, which has oxidized to a dull grey or black.

The original impression of the burnished silver would have been dazzling. All of the paintings have suffered from age and prior restorations.

Paolo Uccello was an Italian painter notable for his pioneering work on visual perspective in art. Uccello was obsessed with perspective and worked hard to create the perfect vanishing point.

He used perspective to create a feeling of depth in his paintings. Working in the Late Gothic tradition, he emphasized color and spectacle rather than classical realism.

A Tour of the Uffizi Gallery

Uccello, The Battle of San Romano

The Battle of San Romano by Paolo Uccello

“The supreme art of war is to subdue the enemy without fighting.”
– Sun Tzu