“The Marriage of the Virgin” by Raphael

“The Marriage of the Virgin” by Raphael depicts a marriage ceremony between Mary and Joseph. A similar themed version by Perugino inspired Raphael, the differences in the two artworks are marked by Raphael’s more subtle and refined style.

In this artwork, Raphael also challenged himself to draw the temple in perspective, with evident care, that it is delightful to behold. Painted during the Italian High Renaissance in 1504, this work was commissioned for a Franciscan church.

In the Gospel of Luke, Joseph lived in Nazareth, but Jesus is born in Bethlehem because Joseph and Mary have to travel there to be counted in a census. Joseph’s occupation is mentioned only once, and he was referred to as a carpenter.

The last time Joseph appears in any Gospel book is in the story of the Passover visit to the Temple in Jerusalem when Jesus is 12 years old.

No mention is made of him after that. The Gospel stories focus on Jesus’ coming mission. 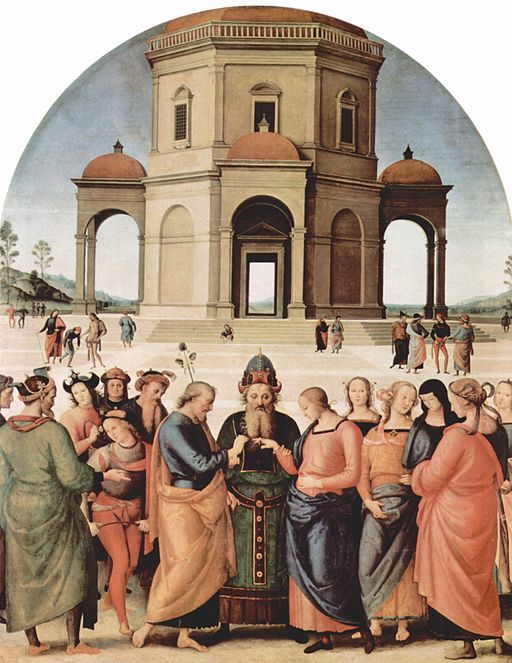 In both Catholic and Protestant traditions, Joseph is regarded as the patron saint of workers and is associated with various feast days.

The Marriage of the Virgin

Brera – The Marriage of the Virgin

Raphael and Perugino, the Marriage of the Virgin

Raphael, Marriage of the Virgin, 1504

THE MARRIAGE OF THE VIRGIN – Raffaello Sanzio

Raphael; Marriage of the Virgin