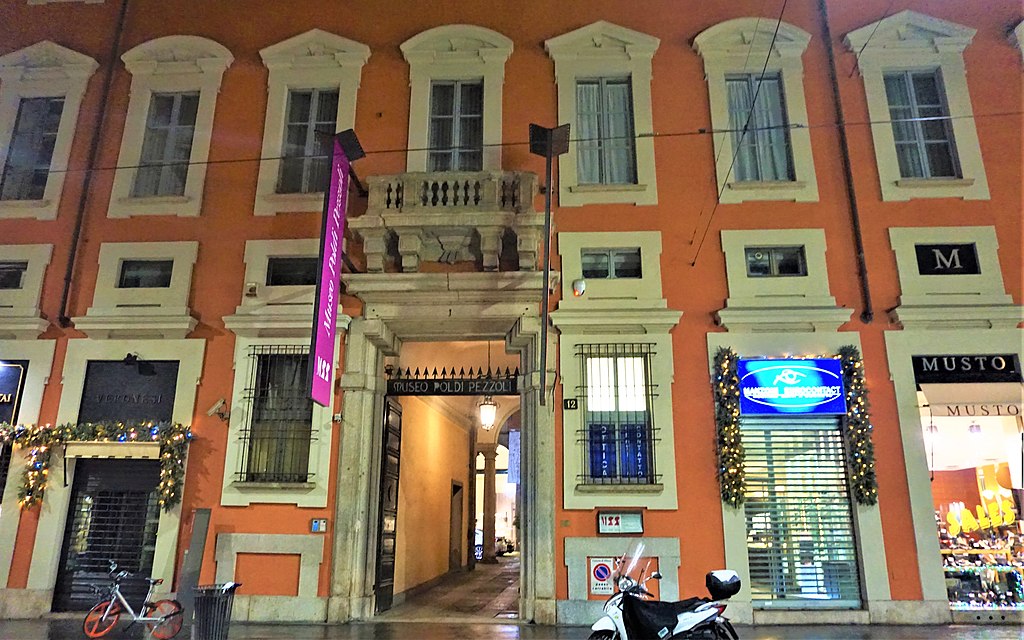 The Museo Poldi Pezzoli is an art museum that originated in the 19th century as a private collection. Many of the rooms in the palace were redecorated, starting in 1846.

The individual rooms were often decorated and furnished to match the paintings hung on the walls. The architect rebuilt the palace in its present Neoclassical style with an English-style interior garden.

The house and contents were left in a will to the Brera Academy, and the museum opened in 1881. During World War II, the palace suffered grave damage, but the artworks had been placed in safe storage. The museum was reopened in 1951 after reconstruction.

The museum’s collection includes a  broad collection of Northern Italian and Netherlandish/Flemish artists plus exhibits of weaponry, glassworks, ceramics, jewelry, and furnishings.

“Portrait of a Girl” by Piero del Pollaiolo

“Portrait of a Girl” by Piero del Pollaiolo portrays a rich Florentine girl, who was approaching her wedding age. These portraits provided public visibility to ensure a successful match with a rich and well position husband and family.

The Sumptuary laws, which were laws that attempt to restraining luxury or extravagance, allowed women to wear expensive clothes and jewels only for their marriage and the following three years.

This profile view was the tradition for the mid-1400s, as it prevented the sitter from meeting the gaze of the viewer, which was the custom to demonstrate respectability and dignity.

The artist used a technique based on the dense accumulation of oil pigment to create thickness to the smallest details, such as the velvet of the sleeve.

“Prà della Valle in Padua” by Canaletto depicts a public square in Padua, before an extensive makeover in 1775-1776 altered its appearance.

The painting represents a valuable record of the city’s history, and its grand piazza, with its large grassy surfaces, is bounded by the Basilica of Santa Giustina and by the University College.

The open square is shown with a multitude of people, plus several horsedrawn carriages and carts making the scene animated and alive.

The painting is an example of the style called the “Venetian veduta,” which is characterized by the integration of natural and architectural elements into a composition.

Many different versions of such compositions were produced, by various artists, indicating that there was an eager market for works of this type.