“The Last Supper” by Leonardo da Vinci depicts the scene of the Last Supper of Jesus with his apostles, as told in the Gospel of John.

Da Vinci focused on representing the anxiety and confusion, as he imagined, would have occurred among the Twelve Disciples at the specific point, when Jesus announced that one of them would betray him.

This masterpiece covers one end wall of the dining hall at the monastery of Santa Maria Delle Grazie in Milan.

The room was used for communal meals of the Convent and was commissioned as part of a plan of renovations to the church and its convent buildings by Leonardo’s patron Ludovico Sforza, Duke of Milan.

Leonardo began work on The Last Supper in 1495 and took three years to portray the reaction given by each apostle when Jesus said one of them would betray him.

All twelve apostles have different responses to the news, with various degrees of anger and shock. The apostles are identified by the Notebooks of Leonardo da Vinci from left to right, as follows: 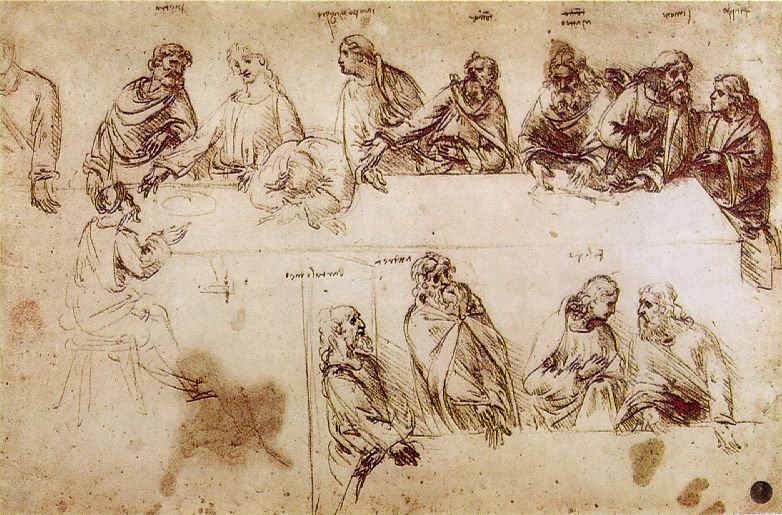 A study for The Last Supper from Leonardo’s notebooks. This study shows nine of the apostles identified by names.

In common with other depictions of the Last Supper from this period, Leonardo has seated the diners on one side of the table, so that none of them has his back to the viewer.

The painting has several echoes to the number 3, which represents the Christian belief in the Holy Trinity.

The Apostles are seated in groupings of three; there are three windows behind Jesus, and the shape of Jesus’ figure resembles a triangle with three sides and three points.

Da Vinci was experimenting with new techniques, and due to the methods he used and to a variety of humidity and environmental factors plus war damage, very little of the original painting remains today despite numerous restoration attempts.

Fortunately, two early copies of The Last Supper are known to exist, presumed to be work by Leonardo’s assistants. These copies give us today with useful insights into the detail and luminosity that the original Da Vinci would have had.

A contemporary copy of The Last Supper, ca. 1520, by Giovanni Pietro Rizzoli, who is thought to have worked closely with Leonardo when he was in Milan.

Da Vinci’s masterpiece is one of the world’s most recognizable images. It has inspired many copies; however, the original in the exact place where Da Vinci painted it, continues to be an awe-inspiring experience. 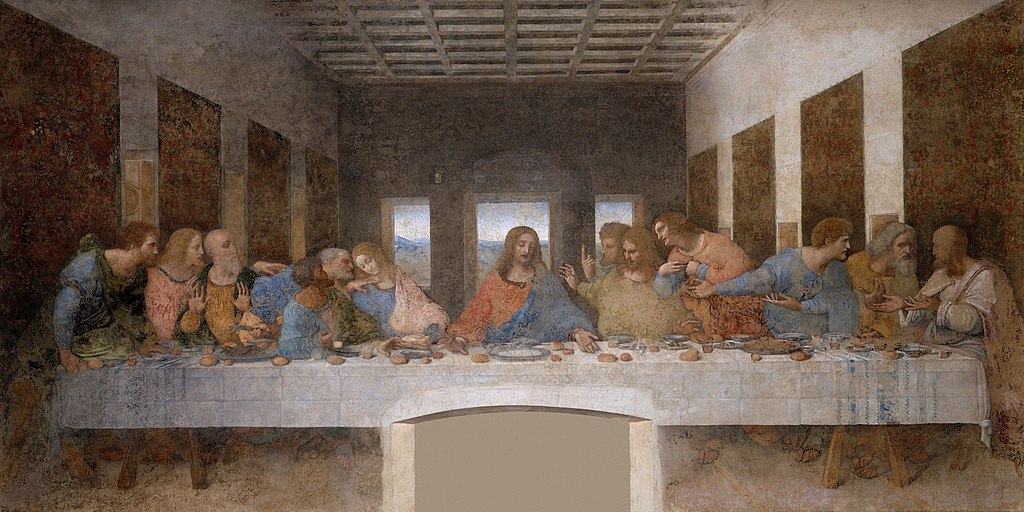 Speculation about the symbolism in The Last Supper

The Last Supper has attracted speculation by writers and historians centered on purported hidden messages or symbolism found within the painting. Some of the speculations include:

What did Leonardo da Vinci’s “Last Supper” really look like?