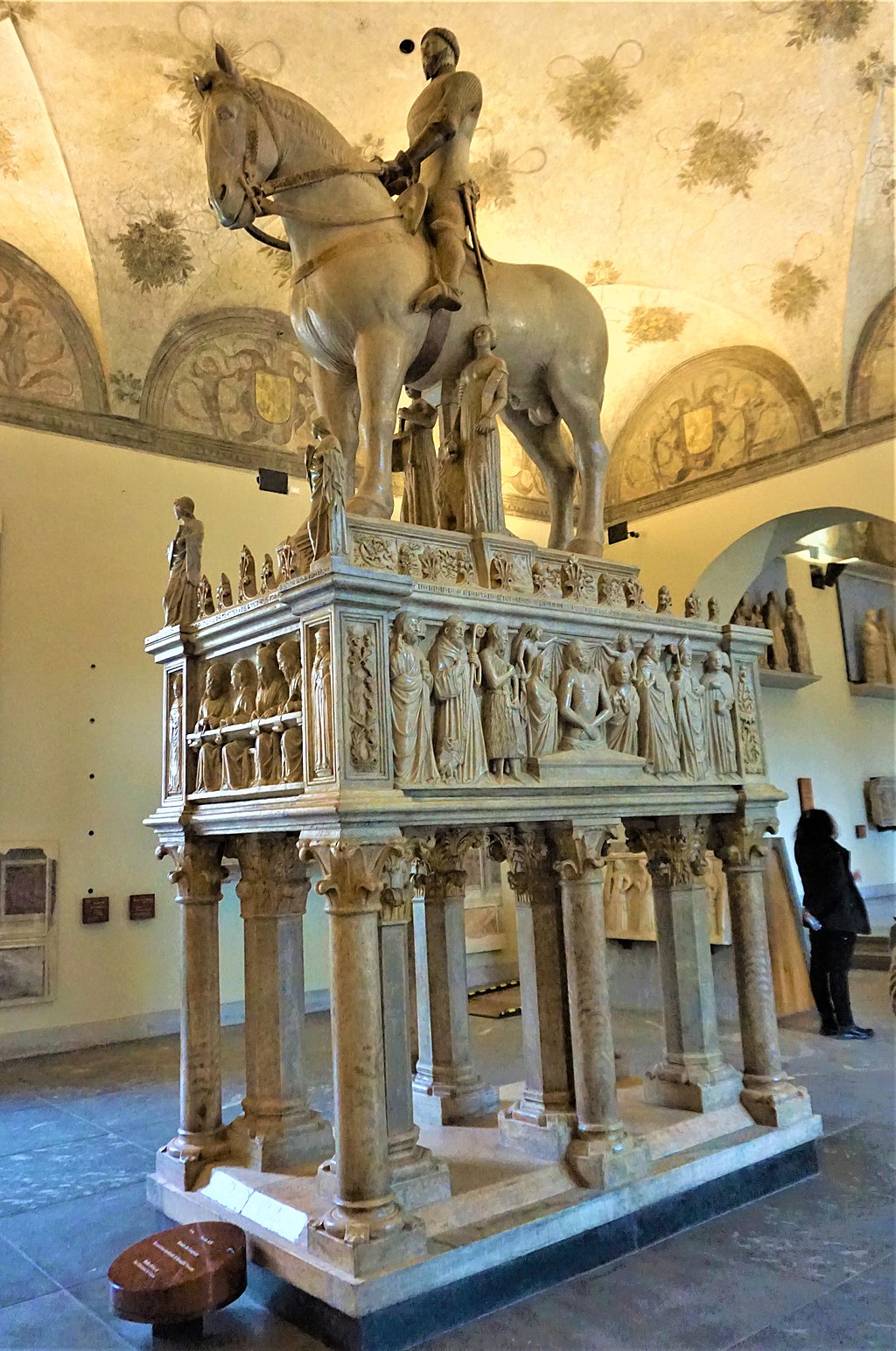 The Tomb of Bernabò Visconti is an equestrian marble tomb that initially stood behind the high altar of the now-demolished Saint Giovanni in Conca. San Giovanni in Conca was a crypt of a former basilica church in Milan.

The rider was initially covered in silver and had golden spurs and shield. These metal embellishments and attachments are now lost.

Barnabò Visconti commissioned the monument, and the horse and rider date from 1363, while the sarcophagus dates from Visconti’s death about 1385.

Bonino da Campione sculpted the equestrian statue, which was repurposed with changes and additions to become Barnabò Visconti’s funerary monument.

Directly under the horse and rider sits the Four Evangelists with Saint Gregory the Great and Saint Jerome. On the backside of the monument, a scene shows the coronation of the Virgin surrounded by four angels, Saint Ambrose and Saint Augustine.

The more extended side panels depict more complex scenes, including the crucifixion of Christ and Christ as the Man of Sorrows.

Barnabò Visconti (1323 – 1385) was an Italian soldier and statesman, who was Lord of Milan. Barnabò Visconti was born in Milan, but from 1346 to 1349, he lived in exile until he was called back by his uncle, Giovanni Visconti.

His intrigues and ambitions kept him at war almost continuously with Pope Urban V, the Florentines, Venice, and Savoy. In 1354, following the death of his uncle, he inherited the power of Milan, together with his brothers Matteo and Galeazzo.

Milan itself was to be ruled in turn by the three brothers.

His wife gave her name to the church of Santa Maria Alla Scala in Milan, and by extension, the La Scala opera house, Teatro Alla Scala, which was built on the same site four hundred years later.

Barnabò Visconti was a despot, and his taxes enraged the Milanese, and he was deposed by his nephew Gian Galeazzo Visconti in 1385. He was imprisoned in the castle of Trezzo, where he was poisoned within the year.

Visconti is the family name of prominent Italian noble dynasties of the Middle Ages.

The Visconti of Milan rose to power in their city, where they ruled from 1277 to 1447, initially as Lords then as Dukes.

Bonino da Campione was an Italian sculptor in the Gothic style, active between 1350 and 1390.

His name indicates that he was born into a family originating in Campione d’Italia, a Lombardy town in an enclave within Switzerland.

His works include several tombs for bishops and wealthy families across Italy, including this equestrian monument of Bernabò Visconti (1363), now in the Museum of Ancient Art at Castello Sforzesco, Milan.

The Tomb of Bernabò Visconti

The Coffins and Tombs of the Royal & Noble Families of Europe