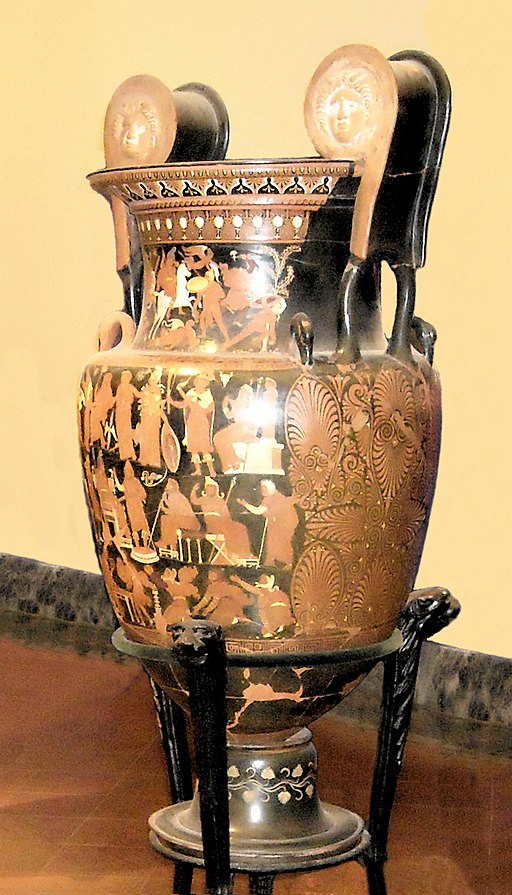 The “Darius Vase” was discovered in 1851 near Canosa di Puglia and is now on display at the National Archaeological Museum, Naples. This volute krater is of large dimensions and many figures, inscriptions, and ornate styling.

The neck of the vase shows combat scenes between the Greeks and the Persians. These scenes represent the battles between Alexander the Great and Darius III. Below the neck are three tiers:

In the top tier, above Darius stands a line of Greek Gods that include: Artemis riding a stag, Apollo seated holding a swan, Aphrodite together with Eros, and Zeus holding a winged thunderbolt.

The middle Tiet shows Darius I seated, wearing a long, ornate, sleeved robe and a high Persian hat. A bodyguard stands behind him, as Darius is listening to his War Council debate the question of War with the Greeks. Xerxes I, still a Prince, is second from right.

The bottom tier shows the Royal Treasurer receiving payments from various conquered nations, whose representatives crouch before him. On a table lays a calculating tablet with several counters in front of the Greek numerals. The tax collector also holds an open diptych wax tablet in which can be read the letters “one hundred talents.”

The use of pebbles on a marked board to make calculations, echos the fact that the Latin word for “pebble” is “calx,” which is the etymological root for the word “calculation.” 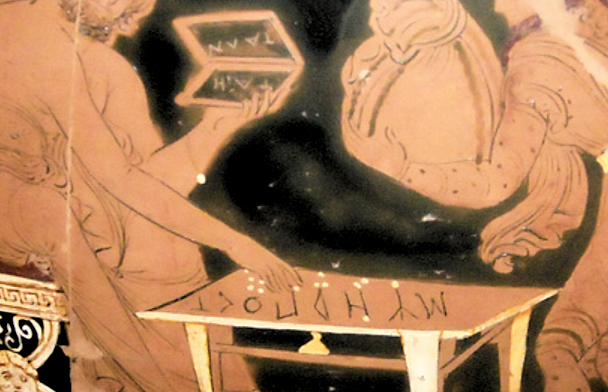 Calculations by the Tax Collector

The Darius vase may have represented a scene from a Greek drama. The central depiction of Darius the Great and its inscription (ΔΑΡΕΙΟΣ, top right) gave the vase, its name the “Darius Vase.”

An anonymous artist painted the Darius Vase, who is today commonly called the Darius Painter. The Darius Painter was an Apulian vase painter and the most eminent representative at the end of the “Ornate Style” in South Italian red-figure vase painting. His works were produced between 340 and 320 BC.

The Darius Painter’s name is derived from his vase called the “Darius Vase.” Many of his works, mostly volute kraters, amphorae, and loutrophoroi, are of large dimensions. He most frequently depicted theatrical scenes, especially ones from the Classical tragedies by Euripides, and mythological themes. Several mythological motifs that have no surviving literary texts are known exclusively from his vases. Some of his paintings, like those on the Darius Vase itself, show historical subjects.

One of the most striking features of his work is the frequent use of inscriptions. He does not limit these to the usual practice of naming individual figures but also uses them thematically. These inscriptions can be seen as “titles.”

The Darius Painter is considered the first painter to have fully exploited the possibilities of large-format vase painting. His drawing style is exceptionally good, particularly with faces, which he often depicts in a three-quarter profile. He was the last important vase-painter in Apulia.

The main production center for Apulian vases was at Taras, the only sizeable Greek polis in Apulia.

A krater or crater was a large vase from the Ancient Greek culture that was used for the dilution of wine with water.

At a Greek symposium, kraters were placed in the center of the room. They were quite large, so they were not easily portable when filled. Thus, the wine-water mixture would be withdrawn from the krater with other vessels.

At the beginning of each symposium, a “lord of the common drink,” was elected by the participants. He would then assume control of the wine servants, and thus of the degree of wine dilution and how it changed during the party, and the rate of cup refills.

The modern Greek word now used for wine is “krasi,” it originated from the word “krasis” or the mixing of wine and water in kraters.