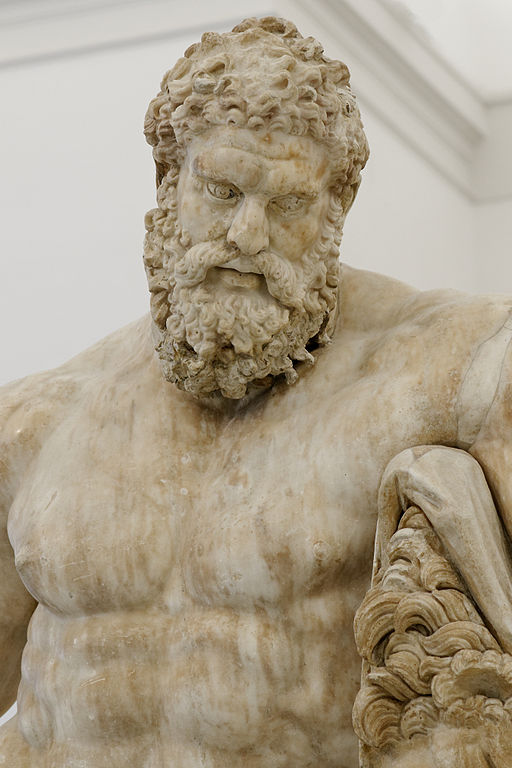 The Farnese Hercules is an ancient and famous marble statue of Hercules. It depicts a muscular, yet weary, Hercules in a rare moment of repose as he leans on his knobby club. The club is covered by the skin of the fabled Nemean lion draped over it. In myths about Heracles, killing the Nemean lion was his first challenge on his journey to becoming a heroic figure.

Hercules also holds the apples of the Hesperides, concealing them behind his back cradled in his right hand. The apples symbolize that he has just performed one of the last of “The Twelve Labours.” One of his last Labours was to steal the Golden Apples from the Garden of the Hesperides.

Like many other much admired Ancient Roman sculptures, the Farnese Hercules is a copy of a much older Greek original that was well known, in this case, a bronze by Lysippos that would have been made in the fourth century BC. The heroic-scale of this depiction of Hercules made it one of the most famous sculptures of Antiquity and has fixed the image of the mythic hero in the European imagination. Several copies of this style of Hercules can be found in museums across the world.

Napoleon remarked that the omission of the Farnese Hercules from his museum in Paris was the most critical gap in his collection. More than once, the sculpture was made ready for shipment to Paris before the Napoleonic regime fled Naples.

This copy was made for the Baths of Caracalla in Rome, which were dedicated in 216 AD. The statue was recovered in 1546 reassembled and restored by degrees. The head had been recovered separately from the legs. The sculpture quickly made its way into the collection of Cardinal Alessandro Farnese, grandson of Pope Paul III.

Alessandro Farnese was well placed to form one of the most significant collections of classical sculpture that has been assembled since Antiquity. It stood for generations in its own room at Palazzo Farnese, Rome, where the statue was surrounded by frescoed depictions of the hero’s mythical feats.  Many engravings and woodcuts spread the fame of the Farnese’s Hercules. The Farnese statue was moved to Naples in 1787 with most of the Farnese Collection and is now displayed in the Museo Archeologico Nazionale.

In Roman works of art and in Renaissance and post-Renaissance art, Hercules can be identified by his attributes, the lion skin and the gnarled club, his favorite weapon. Hercules was also among the earliest figures on ancient Roman coinage and has been the central motif of many collector coins and medals since.

Hercules is a Roman hero and god. He was the Roman equivalent of the Greek divine hero Heracles, who was the son of Zeus and a mortal woman. Hercules is famous for his strength and his numerous far-ranging adventures. In later Western art and literature and culture, Hercules is more commonly used than Heracles as the name of the hero.

In modern times the military has named ships and aircraft after the mighty ancient hero:

As well as military, numerous civilian sailing and steamships have been named Hercules

Hercules is known for his many adventures, which took him to the far reaches of the Greco-Roman world. One cycle of these adventures became canonical as the “Twelve Labours”:

The Apples from the Garden of the Hesperides

The Garden of the Hesperides is an orchard that belonged to the Greek gods, with one tree or a grove producing golden apples. According to the legend, when the marriage of Zeus, king of the Greek gods, and Hera, queen of the Olympian gods, took place, the different deities came with nuptial presents for the couple. The goddess of Gaia came with branches with golden apples growing on them as a wedding gift. Hera so much admired these; she begged of Gaia to plant them in her gardens.

The Hesperides were given the task of tending to the grove, but occasionally picked apples from it themselves. Not trusting them, Hera also placed in the garden an immortal, never-sleeping, hundred-headed dragon named Ladon as an additional safeguard. In the myth of the Judgement of Paris, it was from the Garden that Eris, Goddess of Discord, obtained the Apple of Discord, which led to the Trojan War.

In later years it was thought that the “golden apples” might have been oranges, a fruit unknown to Europe and the Mediterranean before the Middle Ages. Under this assumption, the Greek botanical name chosen for all citrus species was Hesperidoeidē, and even today, the Greek word for the orange fruit is Portokáli after the country of Portugal in Iberia near where the mythical Garden of the Hesperides was located.

The Farnese Collection includes some of the most influential works from the classical world. The works are now displayed in various museums in Naples and the British Museum in London.

The items in the collection were acquired by Cardinal Alessandro Farnese, who became Pope Paul III (1534 – 1549). Classical artworks were routinely uncovered in Roman lands, and during the Italian Renaissance, they were much desired. Many were family heirlooms of prominent families in Rome. Other works were bought in the antique market, including works that were appearing as part of excavations and construction throughout the city. Michelangelo had designed niches to display statuary in the massive Palazzo Farnese (1546) in Rome.

The collection passed through Elisabetta Farnese, wife of Philip V of Spain, to their son, who became king of Naples and the Two Sicilies in 1734. His son Ferdinand IV of Naples brought the Roman collections to Naples in 1787, despite the strong opposition of the Papacy.

Today most of the collection is across different museums in Naples as well as ten items in the British Museum that were purchased in 1864.

“You see?’ said Prometheus. ‘It is your fate to be Heracles the hero, burdened with labors, yet it is also your choice. You choose to submit to it. Such is the paradox of living. We willingly accept that we have no will.”
― Stephen Fry, Heroes: Mortals and Monsters, Quests and Adventures