The Venus Callipyge, also known by her Greek name Aphrodite Kallipygos or the Callipygian Venus, all literally meaning “Venus (or Aphrodite) of the beautiful buttocks.” The most famous Venus Callipyge sculptures include:

Venus Callipyge from the Farnese Collection

The Venus Callipyge is a famous Ancient Roman marble statue, which is a copy of an older Greek original. It depicts a partially draped woman, raising her peplos to uncover her hips and buttocks, and looking back and down over her shoulder. The subject is conventionally identified as Venus, and some versions use her Greek name, Aphrodite.

Venus Callipyge from the Farnese Collection dates to the late 1st century BC. The lost Greek original on which it is based is thought to have been bronze, and to have been created around 300 BC. The provenance of this marble copy is unknown, but it was rediscovered, missing her head. The head was restored in the 16th century and again in the 18th century.

The restored head was made to look over the shoulder, drawing further attention to the statue’s bare buttocks. In the 17th and 18th centuries, the statue was identified as Venus and associated with a temple to Aphrodite Kallipygos at Syracuse. The statue has been copied several times by famous sculptors.

The statue was acquired by the Farnese family and was in the Palazzo Farnese by 1594. In 1786 the Venus Kallipygos was moved to Naples with the rest of the Farnese collection. By 1802 it was in a museum that became the Naples National Archaeological Museum. 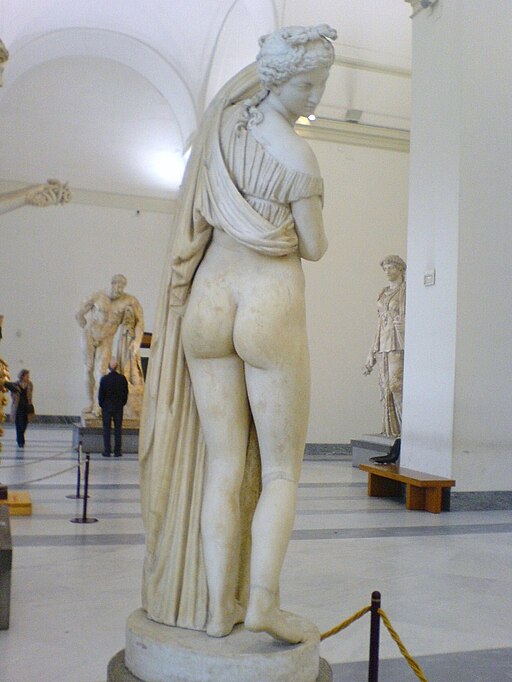 The Farnese Collection includes some of the most influential works from the classical world. The works are now displayed in various museums in Naples and the British Museum in London.

The items in the collection were acquired by Cardinal Alessandro Farnese, who became Pope Paul III (1534 – 1549). Classical artworks were routinely uncovered in Roman lands, and during the Italian Renaissance, they were much desired. Many were family heirlooms of prominent families in Rome. Other works were bought in the antique market, including works that were appearing as part of excavations and construction throughout the city. Michelangelo had designed niches to display sculpture in the massive Palazzo Farnese (1546) in Rome.

The collection passed through Elisabetta Farnese, wife of Philip V of Spain, to their son, who became king of Naples and the Two Sicilies in 1734. His son Ferdinand IV of Naples brought the Roman collections to Naples in 1787, despite the strong opposition of the Papacy.

Today most of the collection is across different museums in Naples as well as ten items in the British Museum that were purchased in 1864.

The term “dimples of Venus,” while informal, is a historically accepted name within the medical profession for the superficial topography of the sacroiliac joints.

The back dimples are sagittally symmetrical indentations sometimes visible on the human lower back. Named after Venus, the Roman goddess of beauty, they are sometimes believed to be a mark of beauty.

The Venus Callipyge by François Barois, at the Louvre Museum, is one of several copies of the Roman version of the Venus from the Farnese Collection. This copy has been provided with additional marble draperies so as not to offend an increasingly prudish public taste. After the French Revolution, it found its way to the Jardin des Tuileries.

Anasyrma is the gesture of lifting the skirt or kilt. It is derived from the Greek and is composed of the Greek words “up, back,” and “skirt.” It is used in connection with certain historical rituals, eroticism, and lewd jokes. The term is used in describing corresponding works of art.

The act of lifting one’s skirt has been used in war to evoke the fear of the enemy. It can also be an act that evokes surprise and subsequent laughter and letting go of sadness. In several cultures, there is a myth of anasyrma used for emotional healing.

Anasyrma may be a deliberately provocative self-exposing of one’s naked genitals or buttocks. In many traditions, this gesture supposedly has the power to avert evil influences or bad luck and to ward off a supernatural enemy.

In some nations of Africa, a woman displaying herself is still considered a curse and a means to ward off evil. As women give life, they can take it away.