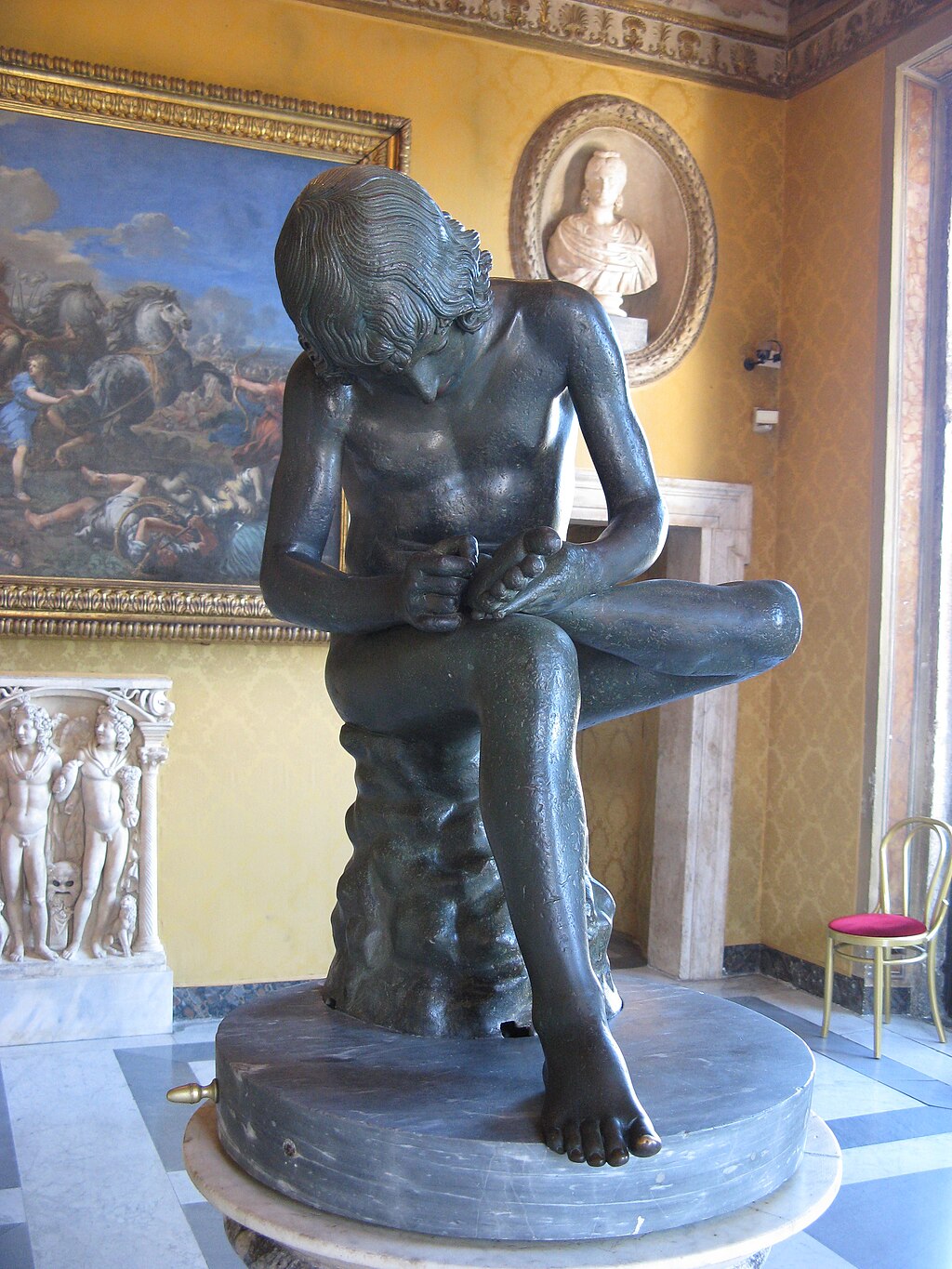 The “Boy with Thorn” is a Greco-Roman bronze sculpture with various Roman marble copies and later smaller sized bronze copies in multiple museums around the word:

The “Boy with Thorn,” at the Capitoline Museums, is a Greco-Roman Hellenistic bronze sculpture of a naked boy sitting on a rock pulling a thorn from the bottom of his foot. The boy has been identified as a young shepherd. The image of the extraction of a thorn from the foot was invented in the Hellenistic period.

The form of the sculpture originated from the Greek’s interest in observing everyday life actions and representing real-life situations. Many copies have been made of this image in bronze and marble. In this sculpture, the head, body, and rocky seat were cast together as one piece.

The statue had also been given the title “The faithful boy” based on an ancient story invented to give this masterpiece a more heroic tale. The faithful messenger was a shepherd boy. He first delivered his message to the Roman Senate, and only after his duty was done, did he stop to remove a painful thorn from his foot. The Roman Senate commemorated the event by commissioning the bronze statue.

Several Hellenistic marble copies have been discovered, such as the “Thorn-Puller” at the British Museum. However, none match the qualities of the bronze. Thus recent scholarship has credited this statue as a Roman bronze copy of the third century C.E., with a head adapted from an archaic prototype. 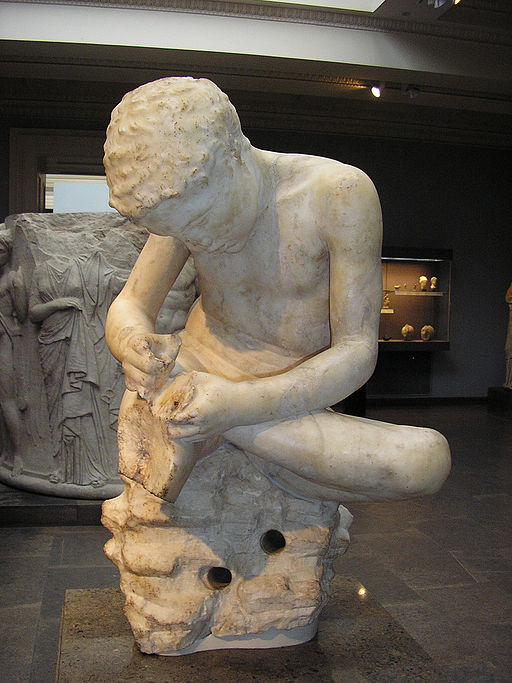 “Boy with Thorn” or “Spinario” at the British Museum is a marble statue of a boy seated on a rock, removing a thorn from his foot. It is a Roman copy of a Hellenistic work of the 3rdC B.C. that can be found in the Capitoline Museums, Rome.

The stone was drilled to accommodate a pipe for a fountain and it was discovered at the Esquiline Hill in Rome. 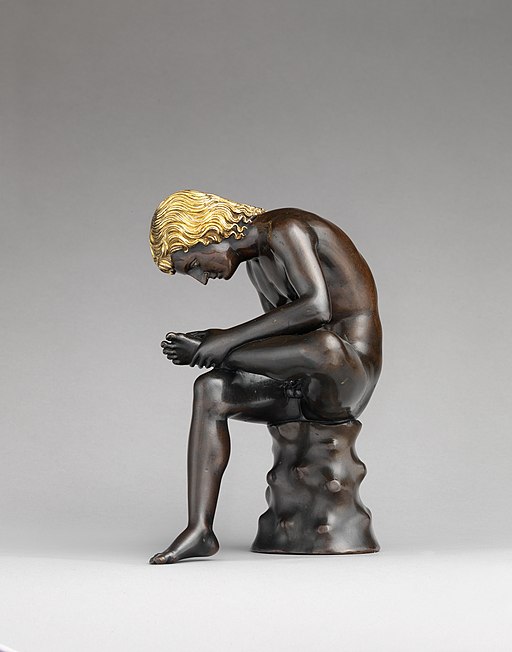 This beautiful statue is one of the few surviving examples of a Spinario by Antico. It is a small copy of the 3rd century B.C. bronze figure from the Capitoline Museums, Rome. The composition is the same as that of the Hellenistic bronze, but Antico subtly animates the figure, conveying the boy’s tension as he performs his painful task. Antico renders the piece, by gilding the boy’s curling hair and silvering his eyes. The Spinario became an ornament in high demand by lovers of Greco-Roman bronze sculptures.

Pier Jacopo Alari Bonacolsi (c. 1460–1528), was called L’Antico for the refined interpretation of the Antique they recognized in his work. Antico was a 16th-century North Italian sculptor, known for his finely detailed small bronzes, often with gilded details, and silver-inlaid eyes, a refinement that is found in some classical and Hellenistic Greek bronzes. His bronzes were remarkable for their extremely fine facture, meticulously cast and finely cleaned and finished. He was the first sculptor to realize the value of casting replicas of his bronzes by preserving his refined wax originals.

Spinario – Boy Pulling a Thorn from His Foot

This “Boy with Thorn” is one of several copies of the original Hellenistic bronze statue at the Capitoline Museums, Rome. The Spinario was made in the first century A.D. from marble and depicts a boy sitting with his legs crossed, while he is trying to remove a thorn from the sole of the left foot. During the Renaissance, the Spinario was one of the most famous sculptures of antiquity, and it was an inspiration for many artists of that time.

“As the picture teaches the coloring, so sculpture the anatomy of form.”
– Ralph Waldo Emerson