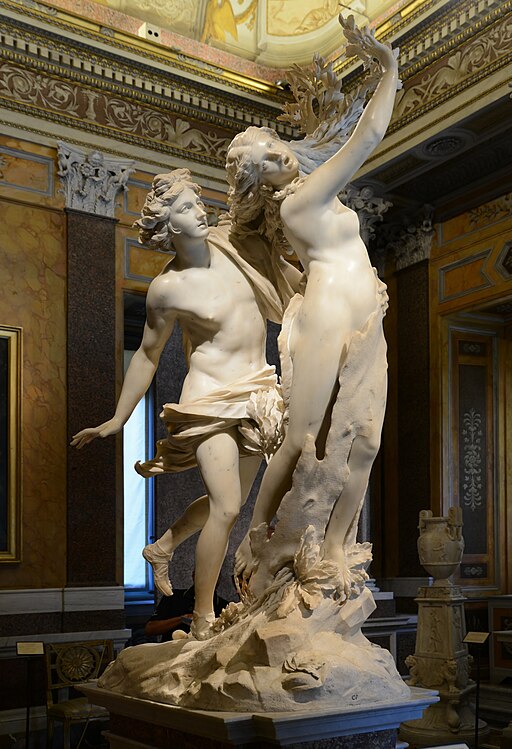 “Apollo and Daphne” by Bernini

“Apollo and Daphne” by Bernini depicts a critical point in the story from ancient Greek mythology, retold by Hellenistic and Roman authors in the form of a romantic vignette.

The story starts with Apollo, the Greek god, and patron of archery mocking the god of love, Eros (Cupid), for his use of bow and arrow. The insulted Eros then prepared two arrows, one of gold and one of lead.

He shot Apollo with the gold shaft, instilling in the god a passionate love for the river nymph Daphne. He shot Daphne with the lead arrow, instilling in her a hatred for Apollo.

Daphne had spurned her many potential lovers, preferring woodland sports instead and to exploring the forest and has dedicated herself to perpetual virginity.

Apollo, having been smitten with Cupid’s love arrow, persistently chases Daphne. He begs her, but the nymph continued to reject him and to run away from his advances.

They were evenly matched in the race until Eros intervened, helping Apollo catch up to Daphne. Seeing that Apollo was bound to reach her, she called upon her father for help and to change her form to be free of Apollo.

Her father, the river god, answered her plea.

“A heavy numbness seized her limbs. A thin bark surrounded her soft breasts. Her hair changed into the foliage. Her forearms changed into branches. Her foot because of sluggish roots. ”

She was turned into a laurel tree. Apollo vowed to honor her forever.

Heartbroken, Apollo also used his powers of eternal youth and immortality to render Daphne evergreen. For this reason, the leaves of the Bay laurel tree do not decay.

The life-sized Baroque marble sculpture by Bernini depicts the climax of the story of Apollo and Daphne (Phoebus and Daphne) in Ovid’s Metamorphoses.

It shows Apollo finally catching up to Daphne, just as she is being transformed into a laurel tree. Apollo clutches Daphne’s hip, pursuing her as she flees to escape him.

Apollo wears a laurel crown. Daphne is portrayed halfway through her metamorphosis into the laurel tree. Her arms were already transforming into its branches.

She flees and calls her father to save her from Apollo. Bernini shows her fingers turning to branches and leaves, and her feet became rooted to the ground. 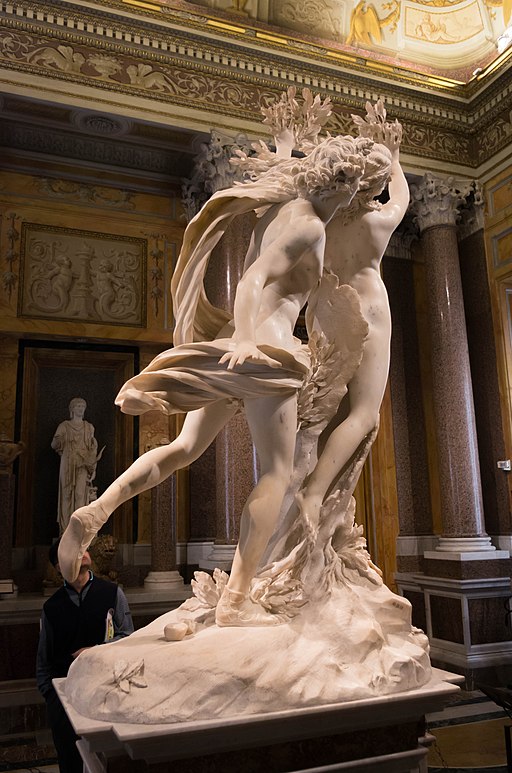 Apollo and Daphne in Art

Many artists have depicted Apollo and Daphne in many art forms. Some have argued that even “The Kiss” by Gustav Klimt, is a painting of the kissing of Daphne by Apollo. At the moment, she is transformed into nature.

There are numerous themes in this story from ancient Greek mythology. The myth has been examined as a battle between chastity and sexual desire or lust.

Apollo, in the story, experiences three primary emotions, that of pride, passion, and loss. Daphne, on the other hand, is forced to sacrifice her body and become a tree as her only form of escape from Apollo’s desires.

At the conclusion of the story, Apollo creates a wreath out of her laurel branches. This act turned her symbol of innocence into a cultural symbol for poets and musicians.