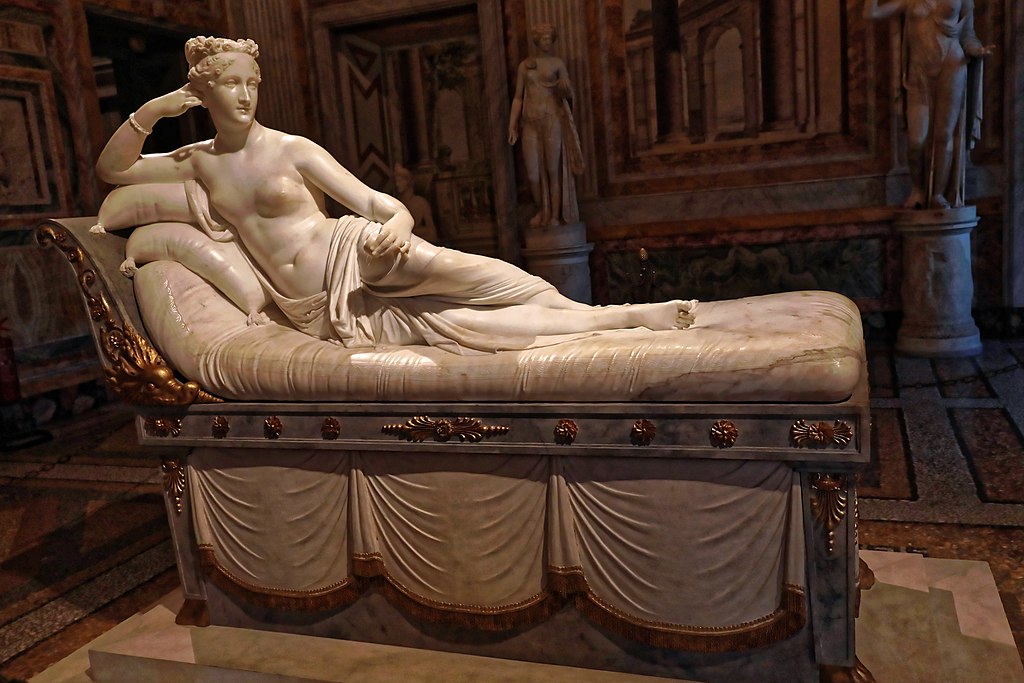 Canova was initially commissioned to depict Pauline Bonaparte fully clothed as the chaste goddess Diana, but Pauline insisted on Venus. Pauline Bonaparte had a reputation for promiscuity and may have enjoyed the controversy of posing naked.

In this sculpture, the head is a realistic portrait but slightly idealized. At the same time, the nude torso is a neo-classically idealized female form and not necessarily based on the Pauline Bonaparte.

The style of the sculpture may have also been affected by the Borghese family’s mythical ancestry. The Borghese claimed they could trace their descent to Venus, through her son Aeneas, the founder of Rome.

The sculpture’s luster was not only due to the exceptional quality of the marble but also to the waxed surface, which has been recently restored.

The draped base once contained a mechanism for rotating the sculpture, as in the case of other works by Canova.  This rotating mechanism was the fashion for some enhanced plates of ancient sculpture in galleries so that a viewer could observe it from all angles without having to move.

Pauline Bonaparte as Venus Victorious was commissioned by Pauline Bonaparte’s husband Camillo Borghese and executed in Rome from 1805 to 1808, after Pauline’s marriage into the Borghese family.

Today, the room in which the sculpture is exhibited at the Galleria Borghese also has a ceiling painting portraying the “Judgment of Paris,” painted by Domenico de Angelis in 1779.

Pauline Bonaparte (1780 – 1825) was an Italian noblewoman whose elder brother was Napoleon, the first Emperor of the French. She married Charles Leclerc, a French general, a union ended by his death in 1802. Later, she married Camillo Borghese, 6th Prince of Sulmona.

Upon Napoleon’s fall, Pauline sold all of her assets and moved to Elba, using that money to better Napoleon’s condition. She was the only Bonaparte sibling to visit her brother during his exile on Elba.

Her home in Paris was sold to the British government. The Duke of Wellington used it as his official residence during his tenure as British Ambassador to France. Today the house is still the home of the British ambassador.

After Napoleon’s defeat at Waterloo, Pauline moved to Rome, under the protection of Pope Pius VII, as did her mother and other members of the Bonaparte family.

Venus Victrix (“Venus the Victorious”) is the Romanised aspect of the Aphrodite in armor that the Greeks had inherited from the East, where the goddess Ishtar was a goddess of war.

Venus Victrix’s cult was such that Roman generals such as Sulla and Caesar claimed to be her protégé. In 55 BC, a temple was dedicated to her in the Campus Martius.

She had a shrine on the Capitoline Hill, and festivals were dedicated to her together with an annual sacrifice. In neo-classical art, her epithet as Victrix is often used in the sense of “Venus Victorious over men’s hearts” or in the context of the “Judgement of Paris.”

The Judgment of Paris is a story from Greek mythology. It was one of the events that led up to the Trojan War. Later, Roman versions of the story refer to Paris in the foundation myths of Rome.

In the Greek myth, three goddesses claimed the golden apple as the prize for the most beautiful. The three Greek goddesses were Hera, Athena, and Aphrodite.

They asked Zeus to judge which of them was fairest. In his wisdom, he was reluctant to favor any claim himself and declared that Paris, a Trojan mortal, would decide the beauty contest.

After Paris failed to judge their beauty with their clothing on, the three goddesses stripped nude to convince Paris of their worthiness. While Paris inspected them, each attempted with her powers to bribe him.

The bribery had long-lasting consequences, as Paris accepted Aphrodite’s gift and awarded the apple to her. Paris eventually received Helen as well as the enmity of the Greeks and the other goddesses in the contest.

The Greeks’ expedition to retrieve Helen from Paris in Troy was the mythological basis of the Trojan War.

The story of the “Judgement of Paris” was popular with artists as it offered the opportunity to depict a beauty contest between three beautiful female nudes.

Antonio Canova (1757 – 1822) was an Italian Neoclassical sculptor, famous for his marble sculptures. Canova was regarded as one of the greatest of the Neoclassical artists; the Baroque and the Classical Revival inspired his artwork.

Canova’s passion in sculptures were either Heroic compositions, compositions of Grace, or Tomb monuments. Canova was a highly recognized successful sculptor, and his skill and talent are evident in his work of “Psyche Revived by Cupid’s Kiss.”

His grandfather led Antonio into the art of sculpting. At the age of nine, Antonio Canova executed two small shrines of Carrara marble, which are still in existence. After these works, he was employed under his grandfather as a sculptor.

Antonio Canova worked in Venice, Rome, France, and England, and by 1800, Canova was the most celebrated artist in Europe. He promoted his reputation by publishing engravings of his works and having marble versions of plaster casts made in his workshop.

“Every block of stone has a statue inside it
and it is the task of the sculptor to discover it.”
– Michelangelo