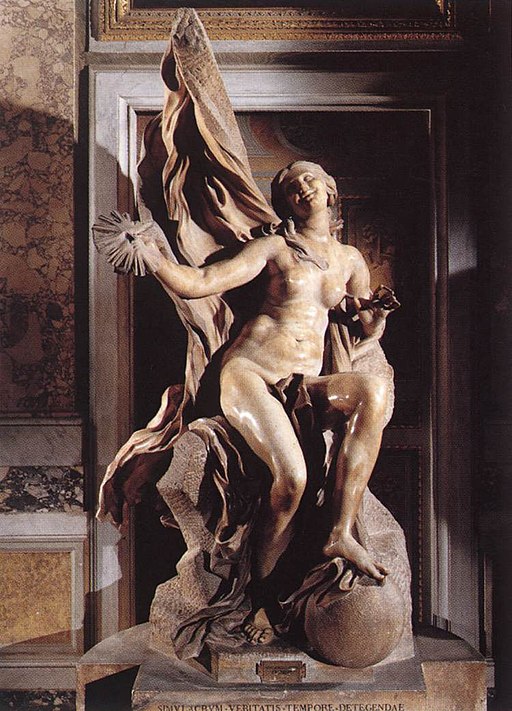 “Truth Unveiled by Time” by Bernini

The female figure is holding the sun in her hand and represents naked “Truth” as her drapery appears to be leaving her body by the invisible hand of “Time.”

Bernini wanted to add the figure of “Time” to the grouping, but time seems to have beaten Bernini, as he never completed his plan.

Bernini began the preparatory work for this sculpture in 1645, during the period after the death of his chief patron and sponsor Pope Urban VIII. Work on the figure of “Truth” was mostly complete by 1652.

Bernini’s created the work, according to his son Domenico, as a sculptural retort to attacks from opponents criticizing his failed project to build two towers onto the front of St. Peter’s Basilica.

Bernini was the lead architect for the St. Peters’ towers. Cracks had appeared in the facade of Bernini’s towers due to the faulty foundations built decades earlier, and Pope Urban ordered the towers destroyed. B

ernini had enemies who wasted no time criticizing him by sensationalizing the event. Bernini was left humiliated, and this statue was part of his response.

Bernini expressed his wish to add the figure of “Time” as late as 1665, as he believed that time would silence his critics and reveal the truth about his works.

Despite never completing the figure of “Time,” Bernini left the sculpture in his will to the first-born of the Bernini family.

It remained in the family until 1924 when the Italian government purchased it and transferred to its current home at the Galleria Borghese.

Pope Urban VIII (1568 – 1644) expanded the papal territory by force of arms and by politics, but he was also a prominent patron of the arts. Urban VIII and his family patronized art on a vast scale.

He spent vast sums funding various substantial works by the sculptor and architect Bernini, and who was particularly favored during Urban VIII’s reign.

Urban commissioned Bernini to work on the family palace in Rome, the Palazzo Barberini, the College of the Propaganda Fide, the Fontana del Tritone in the Piazza Barberini, the Baldacchino and cathedra in St Peter’s Basilica and other prominent structures in the city.

The Barberini also patronized painters such as Nicolas Poussin and Claude Lorrain. Unfortunately, he was also an opponent of Copernicanism and involved in the Galileo affair.

The Galileo affair was the sequence of events, culminating with the trial and condemnation of Galileo Galilei by the Roman Catholic Inquisition in 1633 for his support of heliocentrism, during the reign of Pope Urban VIII.

“Three things are needed for success in painting and sculpture: to see beauty when young and accustom oneself to it, to work hard, and to obtain good advice.”
– Gian Lorenzo Bernini