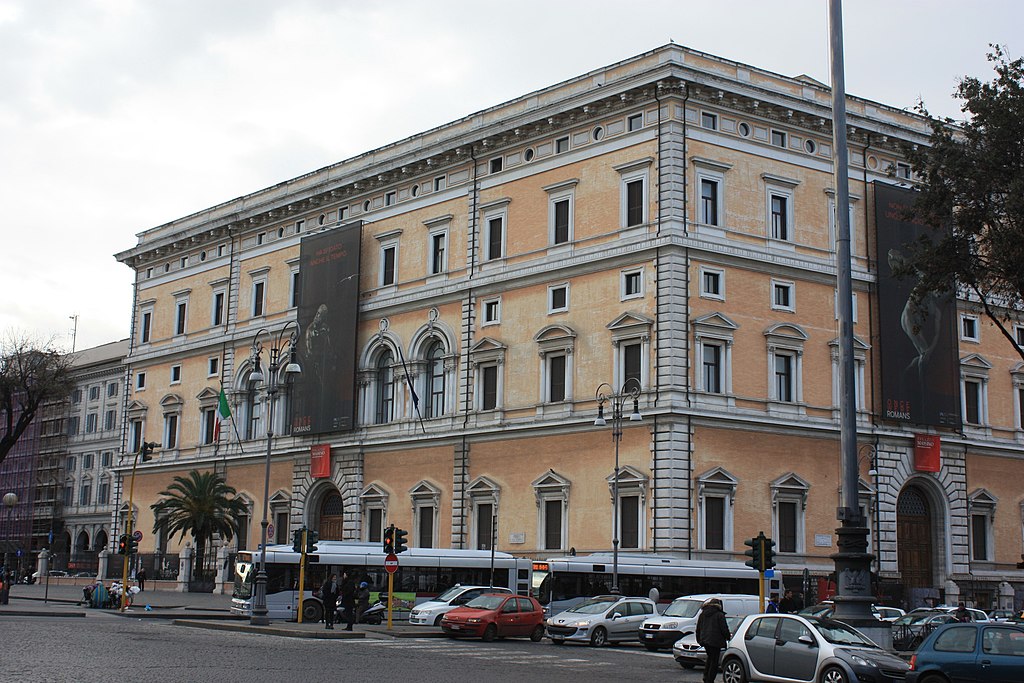 The National Roman Museum, in Italian it is called Museo Nazionale Romano, is a collection of museums in separate buildings throughout the city of Rome, Italy.

The museums exhibit the pre-history and early history of Rome, with a focus on archaeological findings from the period of Ancient Rome.

Highlights of the National Roman Museum

This bust depicts Philip V King of Macedon wearing a Phrygian-style helmet which was common among the Macedonians. Philip V was king from 221 to 179 BC.

Philip, as a young man, was a charismatic and courageous warrior, and he was inevitably compared to Alexander the Great. However, Philip’s reign was principally marked by an unsuccessful struggle with the emerging power of the Roman Republic.

This bust of Aristotle is a marble Roman copy after a Greek bronze original by Lysippos from 330 BC. The alabaster mantle is a modern addition.

Aristotle (384–322 BC) was a philosopher during the Classical period in Ancient Greece, the founder of the Lyceum and the Peripatetic school of philosophy and Aristotelian tradition.

The Portonaccio Sarcophagus is dated to about 200 AD and was used for the burial of a wealthy Roman General who was active in the Campaigns of Marcus Aurelius.

The sculptures show influences similar to those of the Column of Marcus Aurelius. This Sarcophagus, one of the many Roman Battle Sarcophagi, that was probably made in Athens.

The Hellenistic monuments from Pergamon influenced them. The Pergamon monuments in Asia Minor depicted Pergamene battle victories over the Gauls and were commissioned for military commanders.

The “Discobolus of Myron” is a Greek sculpture that represents a youthful ancient Greek athlete throwing a discus. The original Greek bronze from about 460–450 BC is lost, but the work is known through numerous Roman copies.

Copies of the Discobolus have been discovered of both full-scale ones in marble, which was cheaper than bronze, such as the “Palombara Discobolus,” and smaller scaled versions in bronze.

The “Discus Thrower” is depicted as he is about to release his throw and was modeled to represent a human coil of energy ready to explode.

Founded in 1889, the museum aimed to collect and show archaeologic materials unearthed during the excavations after the union of Rome with the Kingdom of Italy.

The original core of its collection originated from the Museo Kircheriano (Kircherian Museum), archaeologic works assembled by the antiquarian and Jesuit priest.

Renamed initially as the Royal Museum, the collection was intended to be moved to a Museo Tiberino (Tiberine Museum), which was never completed.

In 1901 the National Roman Museum acquired the Collection Ludovisi as well as the critical national collections of Ancient Sculpture.

Findings during the urban renewal of the late 19th century added to the collections. Its primary location was established in the charterhouse, which was designed and realized in the 16th century by Michelangelo.

It was located within the Baths of Diocletian, which now houses the epigraphic and the protohistoric sections of the modern museum.

At the same time, the primary collection of ancient art was moved to the nearby Palazzo Massimo alle Terme.

The National Roman Museum’s branches in separate buildings throughout the city of Rome, Italy, include:

“It is better to create than to learn! Creating is the essence of life.”
– Julius Caesar