A large part of the sculpture at the National Roman Museum consists of the bust of famous people from history. 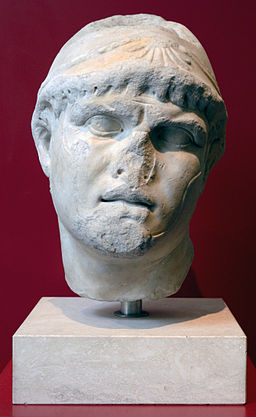 This bust depicts Philip V King of Macedon wearing a Phrygian-style helmet, which was common among the Macedonians. Philip V was king from 221 to 179 BC.

Philip, as a young man, was a charismatic and courageous warrior, and he was inevitably compared to Alexander the Great.

However, Philip’s reign was principally marked by an unsuccessful struggle with the emerging power of the Roman Republic.

Philip V was succeeded by his eldest son Perseus, who ruled as the last king of Macedon.

This bust of Aristotle is a marble Roman copy after a Greek bronze original by Lysippos from 330 BC.

The alabaster mantle is a modern addition. Aristotle (384–322 BC) was a philosopher during the Classical period in Ancient Greece, the founder of the Lyceum and the Peripatetic school of philosophy and Aristotelian tradition.

At seventeen years of age, he joined Plato’s Academy in Athens and remained there until the age of thirty-seven.

Shortly after Plato died, Aristotle left Athens and, at the request of Philip II of Macedon, tutored Alexander the Great beginning in 343 BC.

He also influenced Islamic thought during the Middle Ages, as well as Christian theology.

Plato’s dialogues are among the most comprehensive accounts of Socrates to survive, though it is unclear the degree to which Socrates’s views are hidden in the work.

Through his portrayal in Plato’s dialogues, Socrates has become renowned for his contribution to the fields of ethics.

Socrates exerted a strong influence on philosophers in later antiquity and the modern era.

Depictions of Socrates in art, literature, and popular culture have made him one of the most widely known figures in the Western philosophical tradition.