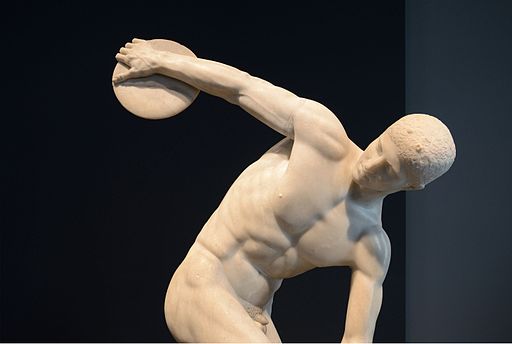 The “Discobolus of Myron” is a Greek sculpture that represents a youthful ancient Greek athlete throwing a discus. The original Greek bronze from about 460–450 BC is lost, but the work is known through numerous Roman copies.

Copies of the Discobolus have been discovered of both full-scale ones in marble, which was cheaper than bronze, and smaller scaled versions in bronze. Historic discoveries include:

The “Discus Thrower” is depicted as he is about to release his throw and was modeled to represent a human coil of energy ready to explode.

The Greek sculptor, known as Myron, is credited with being the first sculptor to master this style. Myron was one of the first to perfect the depiction of the human body twisting in its vertical axis.

The “Discobolus” embodies the Greek concept of “symmetria” in which statues of young athletes are balanced, rhythmical, and finely detailed. It is a freer use of contrapposto, which helped liberate Greek sculpture from its tradition of rigid poses.

The sculptor has created a unique moment just before the action that is so transitory that modern athletes debate the harmony and balance of the composition. Today, his pose is considered by current athletes as an inefficient way to throw the discus. 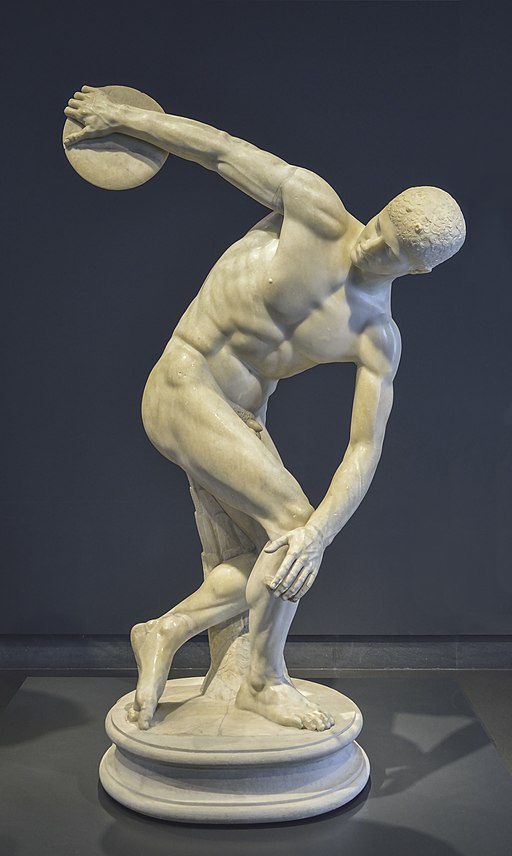 The “Discobolus Palombara” was the first copy of this famous sculpture to have been discovered. It is a 1st-century AD copy of the original bronze.

It was found in 1781 at a Roman property of the Massimo family at the Villa Palombara on the Esquiline Hill. It was instantly famous, and it was installed initially in the Palazzo Massimo alle Colonne and then at Palazzo Lancellotti.

In 1937 Adolf Hitler negotiated to buy it and eventually succeeded in 1938. The Italian Minister of Foreign Affairs sold it to him for five million lire, over the protests from the scholarly community.

It was shipped to Munich and displayed in the Glyptothek. It was returned in 1948 and is now in the National Museum of Rome, displayed at the Palazzo Massimo.

Townley Discobolus at the British Museum

The “Townley Discobolus” was the second notable Discobolus discovered. It was excavated, in 1790, at Hadrian’s Villa and was purchased by an English antiquary and art dealer, at public auction in 1792.

The English connoisseur Charles Townley paid Jenkins £400 for the statue. The head was wrongly restored, but Townley was convinced he had the original and a better copy.

It was bought for the British Museum, with the rest of Townley’s marbles, in 1805.

The Glyptothek in Munich displays a Roman Bronze Discobolus of reduced size from the 2nd century AD.

The position of his left foot, in all the copies, has long been the subject of heated discussion as have the exact sequence of movements when throwing the discus in ancient Greece.

These debates are linked to the questions of the accuracy of the replicas to the original.

The Discus Throw is a track and field event in which an athlete throws a heavy disc, called a discus, in an attempt to throw farther than their competitors.

It is an ancient sport, and it was one of the events of the ancient Greek pentathlon, which can be dated back to at least to 708 BC, and it is part of the modern decathlon.

The sport of throwing the discus traces back to it being an event in the original Olympic Games of Ancient Greece.

The discus was resurrected in Germany in the 1870s. Organized Men’s competition was resumed in the late 19th century and has been a part of the modern Summer Olympic Games since the first modern competition, the 1896 Summer Olympics.

Today the sport is a routine part of modern track-and-field meets at all levels and retains an iconic place in the Olympic Games. 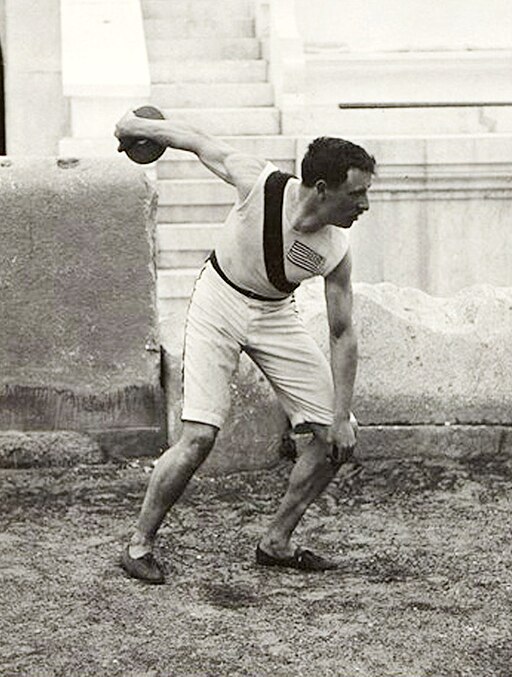 “I count him braver who overcomes his desires than him who conquers his enemies; for the hardest victory is over self.”
– Aristotle