The Portonaccio Sarcophagus is dated to about 200 AD and was used for the burial of a wealthy Roman General who was active in the Campaigns of Marcus Aurelius.

The sculptures show influences similar to those of the Column of Marcus Aurelius. This Sarcophagus, one of the many Roman Battle Sarcophagi, that was probably made in Athens.

The Hellenistic monuments from Pergamon influenced them. The Pergamon monuments in Asia Minor depicted Pergamene battle victories over the Gauls and were commissioned for military commanders.

The Portonaccio Sarcophagus is one of the most elaborate from that Roman period. The face details of the general are unfinished.

The face was blank because the sculptors were waiting for a model to work from which to create a resemblance. Or the sculptures may have produced the work speculatively with no specific commission.

The general and his wife are also each shown twice on the lid frieze. They are placed in the center holding each other’s hands at the center, and singly at the ends, again with unfinished faces.

The battle scene dominates the main face. The scale of the general is slightly larger than the other battling figures, and the soldiers and horses at the front lower part are smaller than their equivalents at the “back” in the upper part.

The pictorial language is unambiguous in its glorification of the general’s prowess and dominance in the battle against the Germanic tribes.

This ancient Roman Sarcophagus was found in the Portonaccio quarter of Rome and is exhibited at the Museo Nazionale Romano, Palazzo Massimo. 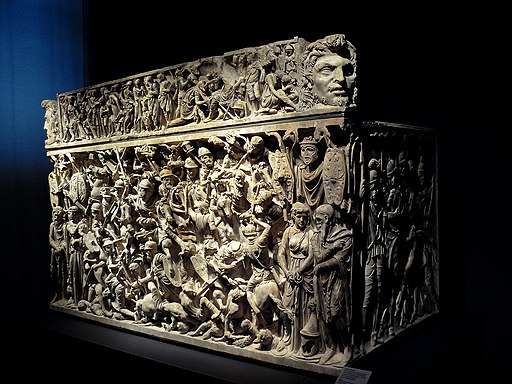 Starting in the 160s, Germanic tribes and other nomadic people launched raids along the northern border, particularly into Gaul and across the Danube.

Numerous members of Germanic tribes settled in frontier regions, and after a long struggle, Marcus Aurelius and his generals managed to push back the invaders. The general who used this Sarcophagus must have been a senior commander of the Emperor.

A sculptured sarcophagus is a funeral receptacle usually displayed above ground or in a tomb chamber.

Ancient Roman sarcophagi were sometimes metal or plaster as well as limestone and were popular from about the reign of Trajan.

Marble was used for the elaborately carved images. The Portonaccio Sarcophagus was designed to be placed against a wall and was decorated on only three of the sides.  The Romans used sarcophagi up until the early Christian burial preference for interment underground.

No mercy for the defeated on the Portonaccio Sarcophagus

“The soul becomes dyed with the color of its thoughts.”
– Marcus Aurelius