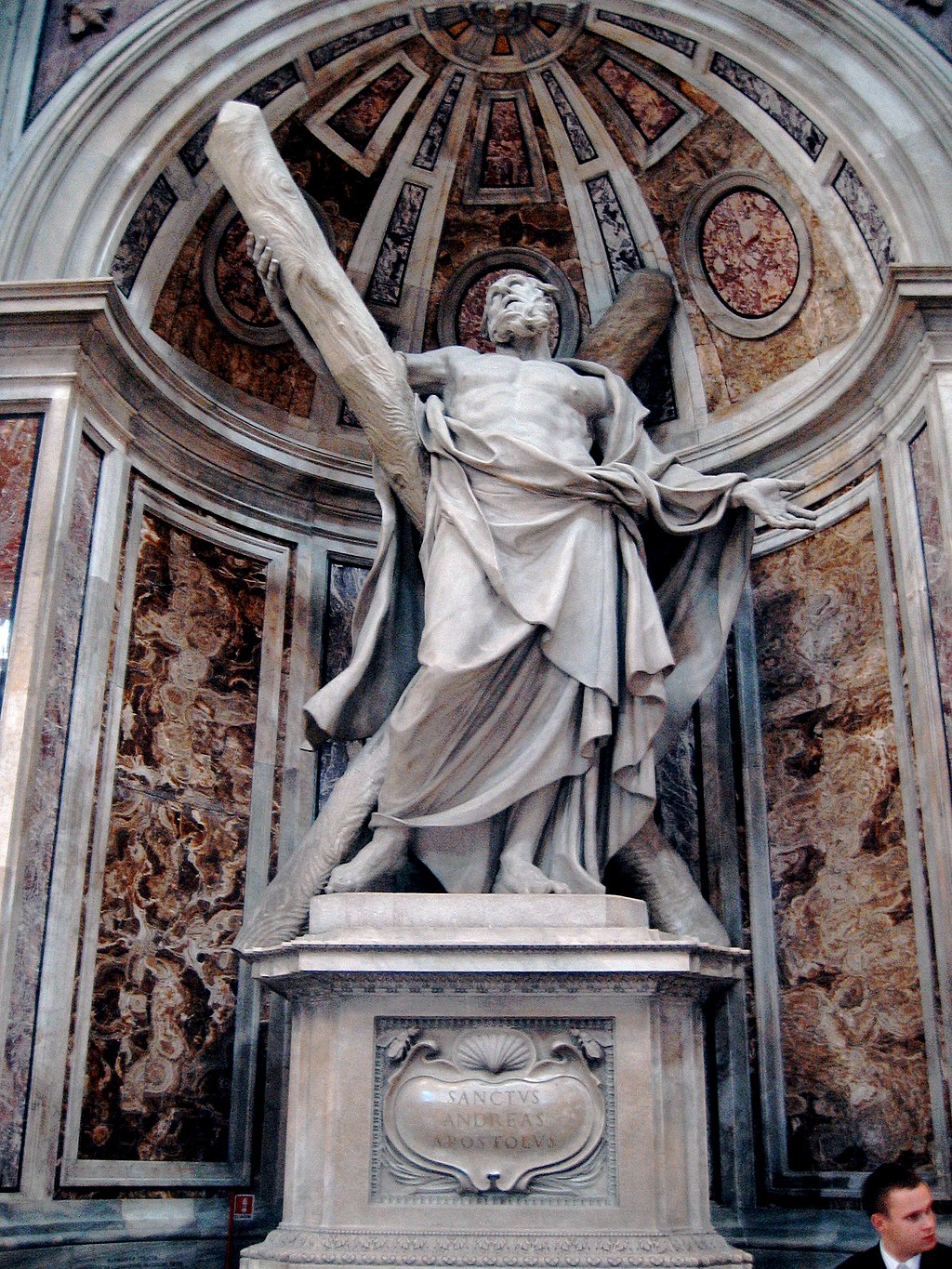 Saint Andrew by Francois Duquesnoy was explicitly created for one of the niches at the crossing of St. Peter’s Basilica.

This artistic marble representation of Saint Andrew is one of the four larger-than-life statues which frame the Baldacchino in the transept of St. Peter’s Basilica.

Each depicts a venerated relic, which at the time was the property of the Pope and St. Peters. The statue of Andrew was commissioned to honor the relic of the apostle’s skull.

Duquesnoy was disappointed when Bernini intrigued to have his statue of St. Longinus placed in the only corner that can receive direct rays of sunlight, enhancing the drama of Bernini’s sculpture.

The is disappointment indicating that the sculptors of the four statues were competing for their reputation.

Comparing Bernini’s and Duquesnoy’s statues, we can see that in the St. Andrew sculpture, the draperies fall vertically, while St. Longinus’ clothes inflate with energy.

In further contrast, St. Andrew leans over the saltire cross of his martyrdom, while St. Longinus flings arms outward in response to divine influence. Both statues accentuate the diagonals.

The name “Andrew,” like other Greek names, appears to have been common among the Jews, Christians, and other Hellenized people of Judea.

According to Mark 1:16-20: As Jesus walked beside the Sea of Galilee, he saw Simon and his brother Andrew casting a net into the lake, for they were fishermen.

“Come, follow me,” Jesus said, “and I will make you fishers of men.”

Andrew is said to have been martyred by crucifixion at the city of Patras in the northwestern part of the Peloponnese peninsula in Greece.

Early texts describe Andrew as bound, not nailed, to a Latin cross of the kind on which Jesus is said to have been crucified.

Yet a tradition developed that Andrew had been crucified on an X-shaped cross, now commonly known as a “Saint Andrew’s Cross.” Supposedly at his request, as he deemed himself unworthy to be crucified on the same type of cross as Jesus had been.

The iconography of the martyrdom of Andrew, showing him bound to an X-shaped cross, was standardized in the later Middle Ages.

Based on church tradition, Andrew’s remains were initially preserved at Patras. Shortly after that, most of the relics were translated from Patras to Constantinople by order of the Roman emperor around 357 AD.

The skull of Saint Andrew, which had been taken to Constantinople, was returned to Patras by Emperor Basil I, who ruled from 867 to 886.

In 1461, the youngest surviving son of Byzantine Emperor, who ruled the province of medieval Peloponnese, fled into exile in Italy, when the Ottomans crossed the Strait of Corinth.

He brought with him what was purported to be the skull of Saint Andrew and gave the head to Pope Pius II, who had it enshrined in one of the four central piers of St. Peter’s Basilica in the Vatican.

Saint Andrew by Francois Duquesnoy was created to honor the relic of the apostle’s skull.

The sculptor, François Duquesnoy, was a Flemish Baroque sculptor who worked in Rome. His more idealized representations are often contrasted with the emotional character of Bernini’s works.

The Papal Basilica of St. Peter is an Italian Renaissance church in Vatican City, which is the papal enclave within the city of Rome. St. Peter’s is the most renowned work of Renaissance architecture and the largest church in the world.

Catholic tradition holds that the Basilica is the burial site of Saint Peter, a leading Apostle of Jesus and the first Bishop of Rome. Saint Peter’s tomb is supposedly directly below the high altar of the Basilica.

“If we strive for goals, relishing in the pleasure of circumstance, nothing is enjoyable, and life becomes purposeless.”
– Andrew the Apostle