The four statues, one in each niche, represent the Basilica’s most famous holy relics. The statue of Saint Longinus was created to hold the spear that pierced the side of Jesus.

The sculptor, Bernini, has depicted a dramatic narrative showing Longinus’ conversion. Bernini’s skill in manipulating marble ensured that he became a worthy successor of Michelangelo, far outshining other sculptors of his generation.

Longinus is the name that Christian history has given to the Roman soldier who pierced Jesus in his side with a lance, the “Holy Lance” during the Crucifixion.

This act created the last of the Five Holy Wounds of Christ. The Holy Lance, also known as the Holy Spear, the Spear of Destiny, or the Lance of Longinus.

According to the Gospel of John, it is the lance that pierced the side of Jesus as he hung on the cross.

There have been three or four relics that are claimed to be the Holy Lance or parts of it. A spearpoint fragment from the Holy Lance is conserved in St. Peter’s Basilica.

Longinus’ legend grew over the years to the point that he was said to have converted to Christianity after the Crucifixion, and he is traditionally venerated as a saint in several Christian communions.

Saint Longinus is usually represented in Christian paintings wearing the uniform of a Roman soldier, and he has a lance or spear in his hand.

The sculptures set in the niches of the four piers supporting the dome of St. Peter’s Basilica are:

Saint Andrew by Francois Duquesnoy was created to honor the relic of the apostle’s skull. 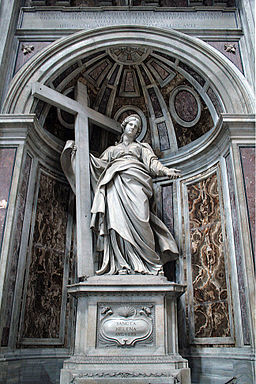 The Statue of Saint Longinus by Bernini shows the saint holding the spear that pierced the side of Jesus is one of these four statues.

As an architect and city planner, he designed both secular buildings and churches and chapels, as well as massive works combining both architecture and sculpture, especially elaborate public fountains.

The Papal Basilica of St. Peter is an Italian Renaissance church in Vatican City, which is the papal enclave within the city of Rome.

St. Peter’s is the most renowned work of Renaissance architecture and the largest church in the world.

Catholic tradition holds that the Basilica is the burial site of Saint Peter, a leading Apostle of Jesus and the first Bishop of Rome.

Saint Peter’s tomb is supposedly directly below the high altar of the Basilica.

A Tour of Italy’s Museums