The Vatican Library is the library of the Holy See, located in Vatican City, and was formally established in 1475 and is one of the oldest libraries in the world.

Virtual Tour of the Vatican Library

Highlights Tour of the Vatican Library

The Borgia Map is a world map made sometime in the early 15th century and engraved on a metal plate. The map was made in about 1450 with a script that identifies it as being made in south German.

The map seeks to not only illustrate the geography of the different countries but also to comment on their ethnography, natural conditions, religion, and critical events of their history.

Unfortunately, nothing about the authorship of the Borgia map is known. The map has a well-crafted and design and was made to last a long time as it is engraved on a copper plate.

Its quality and historical context make Borgia Map one of the most famous ancient maps in the history and evolution of cartography. The map is of non-Ptolemaic origins and is oriented with the South at the top.

The Codex Vaticanus is one of the oldest surviving copies of the Bible and only one of the four surviving codices that containing the entire text of the Greek Old and New Testament Bible.

The Codex is named after the Vatican Library, where it has been kept since at least the 15th century. It is written on 759 leaves of vellum in uncial letters and has been dated to 325–350.

The manuscript is in a quarto volume, composed initially of 830 parchment leaves, but it appears that 71 sheets have been lost.

The Story of Bayad and Riyad is a 13th-century Arabic love story. The Hadith Bayad wa Riyad manuscript is one of three surviving illustrated manuscripts from medieval al-Andalus in modern Spain and Portugal.

The manuscript is believed to be the only illustrated manuscript known to have survived from more than eight centuries of Muslim and Arab presence in Spain.

The tale is about Bayad, a merchant’s son and a foreigner from Damascus, and Riyad, a well-educated slave girl in the court of a senior minister in northern Mesopotamia.

History of the Vatican Library

In 1451, Pope Nicholas V sought to establish a public library at the Vatican, to re-establish Rome as a destination for scholars.

Nicholas combined some 350 Greek, Latin, and Hebrew codices inherited from his predecessors with his extensive acquisitions, among them manuscripts from the imperial Library of Constantinople.

Pope Nicholas also expanded his collection by employing Italian and Byzantine scholars to translate the Greek classics into Latin for his library.

Nicolas also encouraged the inclusion of pagan classics. He was influential in saving many of the Greek works and writings. In 1455, the collection had grown to 1200 books, of which 400 were in Greek.

In 1475 his successor Pope Sixtus IV founded the Palatine Library. During his papacy, acquisitions were made in theology, philosophy, and artistic literature. At the time, it was the most extensive collection of books in the Western world.

Around 1587, Pope Sixtus V commissioned the construction of a new building for the library, which is still used today and became known as the Vatican Library. 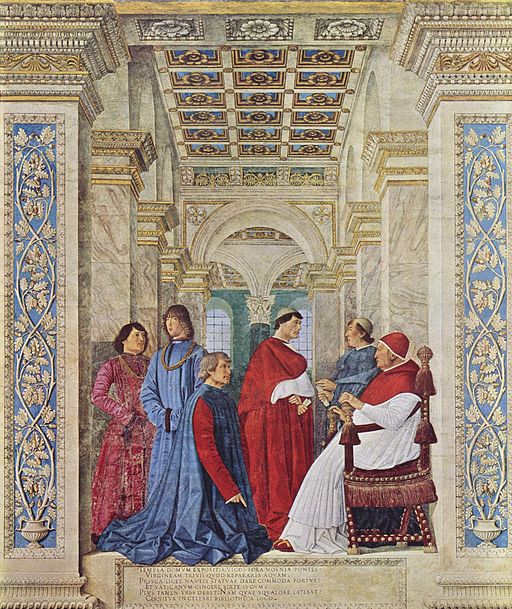 During the Counter-Reformation, access to the library’s collections was limited following the introduction of the Index of banned books.

In 1809, Napoleon Bonaparte removed the contents of the library to Paris. The contents were returned in 1817, after the defeat of Napoleon.

Restrictions were lifted during the 17th century, and Pope Leo XIII formally reopened the library to scholars in 1883.

In 2014, the Vatican Library began a project of digitizing its collection of manuscripts, to be made available online.

A codex (plural: codices) is a book constructed of several sheets of paper, vellum, papyrus, or similar materials. The term is usually reserved to describe manuscript books with handwritten contents.

The Codex is usually bound by stacking the pages and fixing one edge to a spine. In the Western world, the alternative to the paged Codex is the continuous scroll, which was the dominant form of document in the Ancient World.

The spread of the Codex is associated with the rise of Christianity, which adopted the format for the Bible. First described in the 1st-century AD, the Codex became more popular than the scroll after 300 AD.

Some codices are continuously folded like a concertina, in particular the Maya codices and Aztec codices, which are long sheets of paper or animal skin folded into pages.

An incunable is a book, pamphlet, or broadside printed in Europe before the 16th century. Incunabula are not manuscripts, which are documents written by hand.

There are about 30,000 distinct known printed documents that have survived from before 1501. It is estimated that the number of lost editions is at least 20,000.

The Vatican Apostolic Archive was known until recently as the Vatican Secret Archive is the repository all acts promulgated by the Holy See. The pope owns the material held in the archive until his death or resignation, with ownership passing to his successor.

The archive also contains state papers, correspondence, and many other documents that the church has accumulated over the centuries.

In the 17th century, under the orders of Pope Paul V, the Secret Archive was separated from the Vatican Library. The Secret Archive remained closed to outsiders until the late 19th century when Pope Leo XIII opened the archive to researchers.

Parts of the archive do, however, remain truly secret or “classified.”  Most of the materials which are actively denied to outsiders relate to contemporary personalities and activities, including everything dated after 1939, as well as the private records of church figures after 1922.

A visit to the Vatican Library

“The only thing that you absolutely have to know, is the location of the library.”
– Albert Einstein