The Codex Vaticanus is one of the oldest surviving copies of the Bible and only one of the four surviving codices that containing the entire text of the Greek Old and New Testament Bible.

The Codex is named after the Vatican Library, where it has been kept since at least the 15th century. It is written on 759 leaves of vellum in uncial letters and has been dated to 325–350.

The manuscript is in a quarto volume, composed initially of 830 parchment leaves, but it appears that 71 sheets have been lost.

The parchment is fine and thin. The Codex is written in three columns per page. In the poetical books of the Old Testament, there are only two columns to a page.

The lettering in the Codex is small and neat, without ornamentation or capitals. The Greek is written continuously; all the letters are equidistant from each other; no word is separated from the other; each line appears to be one long word.

There are no enlarged initials, no stops or accents, no divisions into chapters or sections such as are found in later manuscripts.

The provenance and early history of the Codex are uncertain. Most probably, the book was brought to Rome from Constantinople around the time of the fall of the Byzantine Empire.

The manuscript has been housed in the Vatican Library for as long as it has been known, possibly appearing in the library’s earliest catalog of 1475.

The original writing was re-traced by a later scribe in the 10th or 11th century, and the beauty of the original script was spoiled. Accents and breathing marks, as well as punctuation, have been added by a later hand.

Codex Vaticanus is one of the most important manuscripts for the text of the Greek Old Testament and the Greek New Testament. In 2015, a digitized copy of the Codex was available online from the Vatican Library.

These handwritten copies of a Christian Bible in Greek, although discovered at different times and places, share many similarities.

They are written in a particular uncial style of calligraphy without regular gaps between words. All these manuscripts were made at great expense of material and labor, written on vellum by professional scribes.

All of the great uncials had the leaves arranged in quarto form:

It has been speculated that the first two were part of a project ordered by Emperor Constantine the Great to produce 50 copies of the Bible. 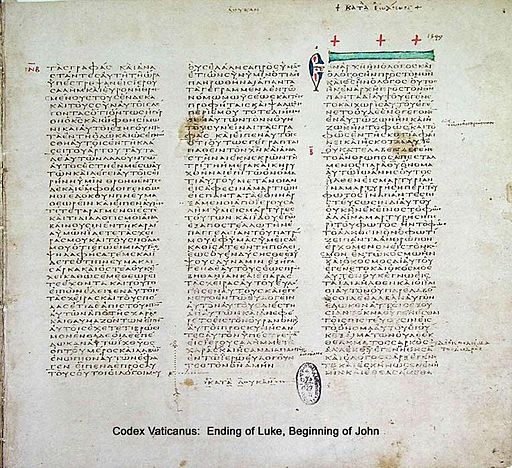 Ending of Luke and Beginning of John in Codex Vaticanus

The Story of Codex Sinaiticus

Codex Vaticanus – the basis for all modern bible translations

“I have never looked into the Greek New Testament five minutes without finding something I never saw before.”
– A. T. Robertson