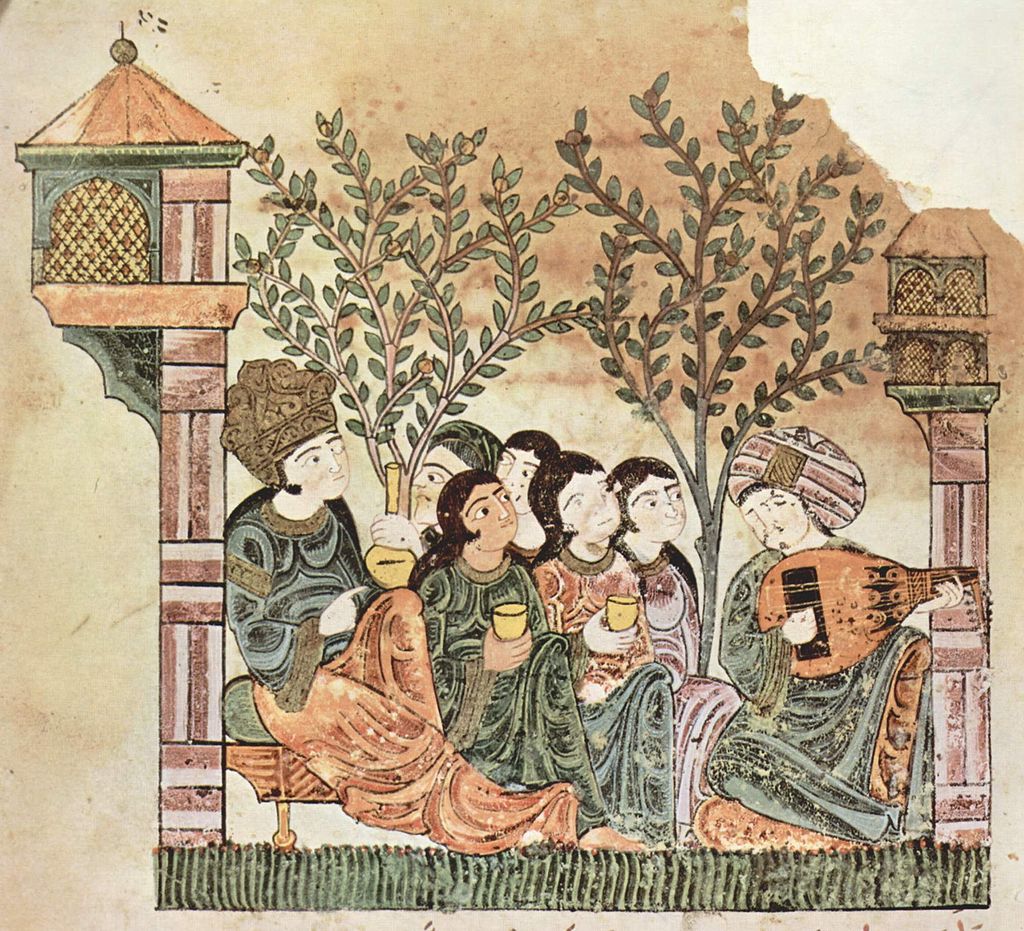 The Love Story of Bayad and Riyad

The Story of Bayad and Riyad is a 13th-century Arabic love story. The Hadith Bayad wa Riyad manuscript is one of three surviving illustrated manuscripts from medieval al-Andalus in modern Spain and Portugal.

The manuscript is believed to be the only illustrated manuscript known to have survived from more than eight centuries of Muslim and Arab presence in Spain.

The tale is about Bayad, a merchant’s son and a foreigner from Damascus, and Riyad, a well-educated slave girl in the court of a senior minister in northern Mesopotamia.

The hero, Bayad, falls in love with a handmaiden of a “Noble Lady,” who is the daughter of the minister. There are several sub-plots in the story because the minster is also interested in Riyad.

An essential character in the story is an older woman who becomes the go-between and becomes Bayad’s confidant and adviser. She plays a vital role in the development and action of the story, exchanging messages, letters, arranging meetings between Bayad and Riyad.

The go-between arranges for the two lovers to meet, and the lovers sing and play the lute, declaring their passion.

The “Noble Lady” is upset by this situation and concerned that her father will find out about Bayad and Riyad. She orders that Riyad be kept in a separate house, where she is left alone to cry and yearn for Bayad.

The go-between arranges a reconciliation between Riyad and the “Noble Lady,” who finally decides to bring Bayad and Riyad together, whatever the consequences.

The story has a happy ending in which Bayad and Riyad can see each other again, thanks to the tactics of the older woman.

This manuscript is the only illustrated reproduction of the text that has survived. The illustrations support and depict the story in the text.

Written in maghribi script, the text was probably copied in Spain from an eastern manuscript of the Baghdad school.

The miniaturist, however, adapted the illustrations to a Spanish setting and changed oriental architectural details. The appearance of the house is clearly western rather than eastern.

This codex remains the only known example of Muslim figurative painting in Spain.

The essential elements of courtly love, which developed in Arabic literature, namely the notions of “Love for Love’s Sake” and “Exaltation of the Beloved Lady” can be traced back to Arabic literature of the 9th and 10th centuries.

The notion of the “Ennobling Power of love” was developed in the early 11th century by the Persian psychologist and philosopher, Ibn Sina, known as “Avicenna,”  in his Arabic “Treatise on Love.”

The concept of “Love as desire never to be fulfilled,” can also be found in Arabic poetry of courtly love.

Al-Andalus was the name given by the Muslims during the Middle Ages to the Iberian Peninsula. At its greatest geographical extent, its territory occupied most of the peninsula and a part of present-day southern France.

The name describes the different Arab or Berber states that controlled these territories at various times between 711 and 1492, though the boundaries changed regularly.

In 1492, Emir Muhammad XII surrendered the Emirate of Granada to Queen Isabella I of Castile, completing the Christian Reconquista of the peninsula.

Virtual Tour of the Vatican Library

“The rose leaves its flowerbed to meet her
The sun is naked
in autumn,
nothing except a thread of cloud around her waist
This is how love arrives.”
– Ali Ahmad Said Esber