The Apollo Belvedere depicts the Greek god Apollo as a standing archer, having just shot his arrow.

The conventional view is that he has just slain the serpent Python guarding Delphi, thereby identifying the sculpture a “Pythian Apollo.”

Alternatively, it may be some other episode of heroism from Greek mythology.

The large white marble sculpture with its sophisticated contrapposto style has been much admired for presenting the figure both frontally and in profile.

Apollo’s hair, lightly curled, flows in ringlets down his neck and rises gracefully above his head, which is encircled with a band symbolic of gods and kings.

His quiver is suspended across his left shoulder. He is entirely nude except for his sandals and a robe clasped at his right shoulder and thrown back.

It is an original Roman re-creation with distinctively Roman foot-wear. It was rediscovered in central Italy in the late 15th century during the Italian Renaissance.

The lower part of the right arm and the left hand were missing when discovered. A sculptor and pupil of Michelangelo restored them.

Once Julius II was Pope, he transferred the Apollo in 1511 to the small sculpture court of the Belvedere, the summerhouse that was linked to the Vatican Palace by the Cortile del Belvedere.

It became the Apollo of the Cortile del Belvedere, and the name has remained with it, even after it was taken indoors.

Many significant artists during the late Renaissance sketched the Apollo, including Michelangelo, Bandinelli, and Goltzius. It became famous in artistic circles, and there was a high demand for copies.

Pier Jacopo Alari Bonacolsi, called “L’Antico,” made a wax model of it, which he cast in bronze, finely finished and partly gilded, as part of the Gonzaga collection and further copies were made for a handful of others. 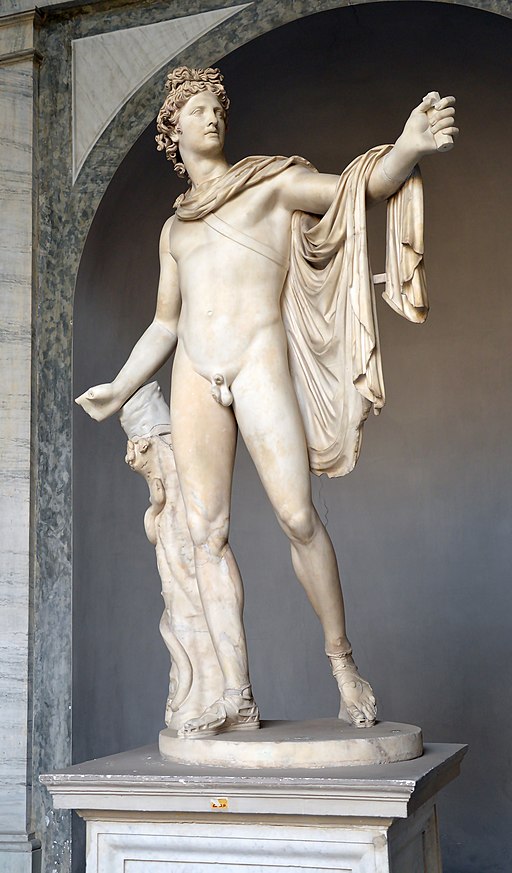 The Apollo became one of the world’s most celebrated artworks, becoming one of the leading lights of neoclassicism and an icon of the Enlightenment. Goethe, Schiller and Byron all praised it.

The Apollo was one of the artworks brought to Paris by Napoleon after his 1796 Italian Campaign. From 1798 it formed part of the collection of the Louvre during the First Empire.

After the fall of Napoleon (1815), the Apollo was repatriated to the Vatican, where it has remained ever since.

Today it is in the Museo Pio-Clementino at the Vatican Museums, Rome. In 1969, the art historian Kenneth Clark commented:

“For four hundred years after it was discovered, the Apollo was the most admired piece of sculpture in the world. It was Napoleon’s greatest boast to have looted it from the Vatican. Now it is completely forgotten except by the guides of coach parties, who have become the only surviving transmitters of traditional culture.”

Contrapposto is an Italian term that means “counterpoise.” It is used in the visual arts to describe a human figure standing with most of its weight on one foot so that its shoulders and arms twist off-axis from the hips and legs in the axial plane.

It marks the first time in Western art that the human body is used to express a psychological disposition.

Sculptors further popularized the style in the Hellenistic and Imperial Roman periods. The form fell out of use in the Middle ages and was later revived during the Renaissance.

Michaelangelo’s statue of David is a famous example of contrapposto.

Apollo is one of the most important of the Olympian deities in classical Greek and Roman religion and mythology. Apollo was the god of archery, music and dance, truth and prophecy, healing and diseases, the Sun and light, and more.

He was the son of Zeus and Leto, and the twin brother of Artemis, goddess of the hunt.

Apollo was seen as the most beautiful god and the most Greek of all the gods. As the patron deity of Delphi, he is the prophetic deity of the Delphic Oracle.

As the god of “Mousike” (the Art of Muses), Apollo presides overall music, songs, dance, and poetry. He is the inventor of string-music and the frequent companion of the Muses.

The Cortile del Belvedere or Belvedere Court was a major architectural work of the High Renaissance at the Vatican Palace in Rome.

Designed in 1505, its concept reverberated in courtyard design and influenced piazzas and garden plans throughout Western Europe for centuries.

Conceived as a single enclosed space, the long Belvedere court connected the Vatican Palace with the Villa Belvedere in a series of terraces connected by stairs, and narrow wings.

Sixtus V changed the unity of the Cortile in 1585 by erecting a wing of the Vatican Library, which occupies the former middle terrace.

This design change allowed for the screening of the collection of sculptures that Pope Adrian VI had referred to as “idols.”

“Apollo was the most admired piece of sculpture in the world. It was Napoleon’s greatest boast to have looted it from the Vatican.”
– Kenneth Clark