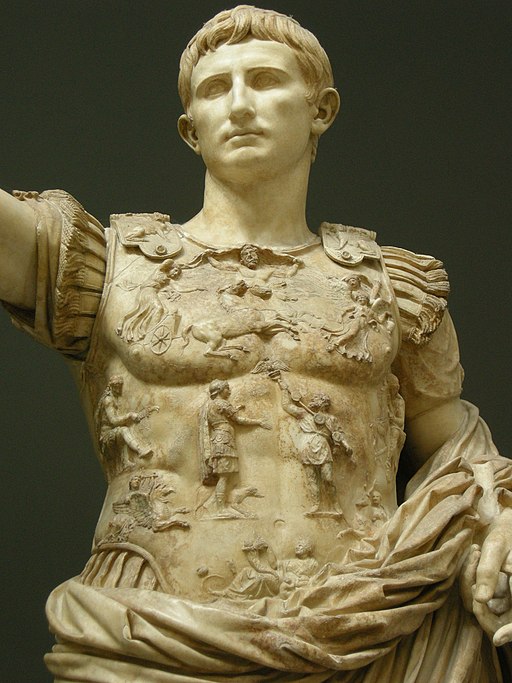 Augustus of Prima Porta is a portrait statue of Augustus Caesar, the first emperor of the Roman Empire. Carved by expert Greek sculptors, the statue is assumed to be a copy of a lost bronze original that was displayed in Rome. It is almost certain that this marble statue was initially painted.

Augustus is depicted barefooted, a convention signifying divinity, which indicates the original was created after his elevation to divine status in AD 14. The imagery on the leather cuirass (breastplate armor) refers to the Parthian restitution of the Roman eagles, or insignia, in 20 BC, one of Augustus’ most significant diplomatic accomplishments.

The statue was commissioned by Tiberius, the successor of Augustus. Tiberius, who served as an intermediary in the recovery of the eagles, and is also depicted on the breastplate. This diplomatic achievement was Tiberius’s most significant service for Augustus, and this imagery connected Tiberius to the deified emperor and symbolized continuity between both reigns.

Augustus is shown in this role of “Imperator,” or commander-in-chief of the Roman army. He is depicted in military clothing, carrying a consular baton and raising his right hand, as if addressing the troops.

The images on his armored breastplate have a complex symbolic and political propaganda agenda. The figures allude to diverse Roman deities, including Mars, the god of war, as well as the personifications of the latest territories he conquered: Hispania, Gaul, Germania, Parthia, and at the top, the chariot of the Sun illuminates Augustus’s deeds.

Augustus’s bare footedness and the inclusion of Cupid riding a dolphin reveals his mythical connection to the goddess Venus, Cupid’s mother, by way of his adopted father, Julius Caesar. 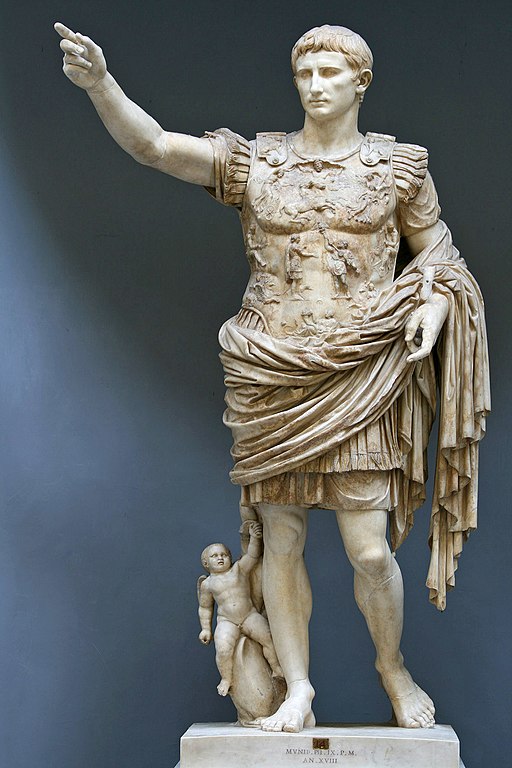 The statue is an idealized image showing a standard pose of a Roman orator and based on the 5th-century BC Greek model by Polykleitos. The Greek contrapposto stance is also copied, creating diagonals between tense and relaxed limbs, a feature typical of classical sculpture. The overall style is closer to Hellenistic idealization than to the realism of Roman portraiture.

The reason for this shift in style was the theft of large amounts of Greek art. This flow of Greek artifacts changed and influenced Roman tastes. Greek art was regarded as a symbol of wealth and status for the Roman upper class. The clear Greek inspiration in style and symbol for official sculptural portraits became instruments of governmental propaganda.

The Prima Porta statue marks a conscious reversal of iconography to the Greek classical and Hellenistic period, in which youth and strength were valued as signs of leadership. The statue’s political function was to show Rome that the emperor Augustus was comparable to the legendary heroes worthy of being raised to divine status on Olympus, and the best man to govern Rome.

The statue was discovered in 1863 at “Villa of Livia.” The Augustus of Prima Porta is displayed in the Braccio Nuovo (New Arm) of the Vatican Museums.

It was probably part of Livia Drusilla’s dowry she brought when she married the emperor Augustus, her second husband, in 39 BC. It was her magnificent country residence complementing her house on the Palatine Hill in Rome.

The site was rediscovered and explored as early as 1596, but it was not recognized as the “Villa of Livia” until the 19th century. Remarkable frescoes of garden views were found, which have since been removed to the Palazzo Massimo Museum in Rome.

Augustus (63 BC – 14) became the first emperor of the Roman Empire, reigning from 27 BC until his death in AD 14. The reign of Augustus initiated an era of relative peace known as the Pax Romana. The Roman world was mostly free from large-scale conflict for more than two centuries, despite continuous wars of imperial expansion and the year-long civil war known as the “Year of the Four Emperors” over the imperial succession.

Augustus was born Gaius Octavius, and when his great-uncle Julius Caesar was assassinated in 44 BC, and Octavius was named in Caesar’s will as his adopted son and heir.

Augustus restored the outward façade of the free Republic; however, he implemented autocratic power over the Republic. It took several years for Augustus to develop the framework within which a formally republican state could be led under his sole rule. He rejected monarchical titles, and instead called himself Princeps Civitatis (“First Citizen”).

Augustus dramatically enlarged the Empire, and beyond the frontiers, he secured the Empire with a buffer region of client states and made peace with the Parthian Empire through diplomacy. He reformed the Roman taxation, developed networks of roads, established a standing army, established the Praetorian Guard, created official police and fire-fighting services for Rome, and rebuilt much of the city during his reign.

Augustus died in AD 14 at the age of 75. There were unconfirmed rumors that his wife Livia poisoned him. He was succeeded as emperor by Livia’s son Tiberius.

The true colors of Augustus of Prima Porta

“I found Rome a city of bricks and left it a city of marble.”
– Augustus