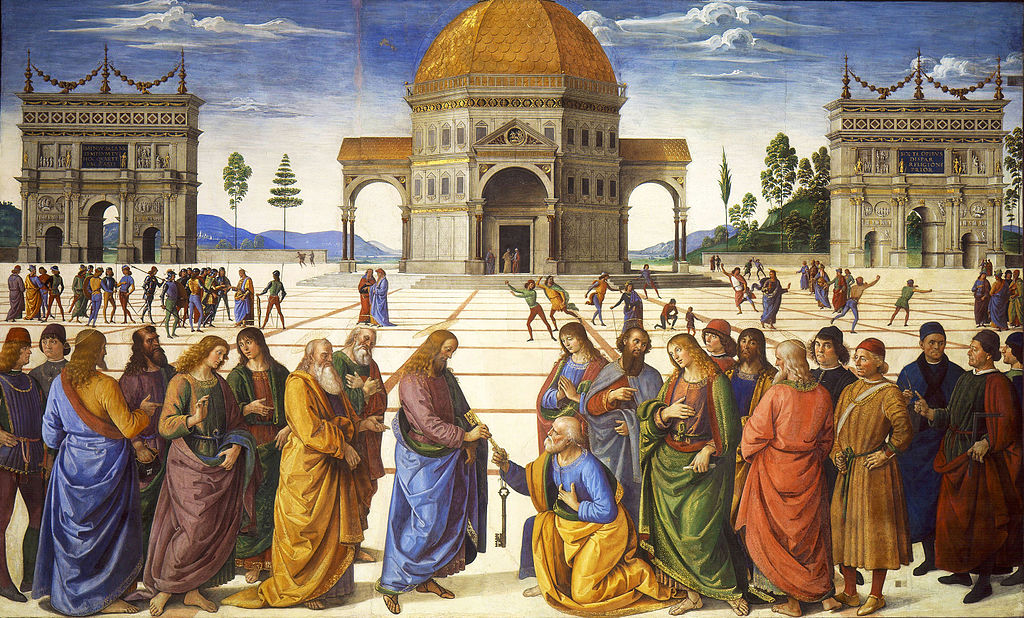 “Delivery of the Keys” by Pietro Perugino is part of the fresco series in the “Stories of Jesus” on the Sistine Chapel’s northern wall.

The “Delivery of the Keys” is a reference to a quotation in Matthew in which Jesus says he will give “the keys of the kingdom of heaven” to Saint Peter.

The Catholic Church teaches that the keys represent the power to forgive, thereby giving them the power to allow others into heaven.

The majority of the figures are organized in a frieze in two rows. The foreground row shows Christ handing the silver and gold keys to the kneeling St. Peter.

The Apostles, all with halos surround Christ. The Apostles include Judas, also with a halo, he is the fifth figure to the left of Christ with his hand in his purse.

The figures without halos are not Apostles but are portraits of famous and influential contemporaries, including a self-portrait, fifth from the right edge.

While the work was still being created, a visit from Alfonso II of Naples resulted in his inclusion to the far left of the group of foreground figures. To balance out the row of figures either side, an apostle was added above St. Peter.

The flat, open square is divided by colored stones into large foreshortened rectangles. In the center of the background is an octagonal Temple of Jerusalem.

The temple resembles the ideal church as defined by Leon Battista Alberti in his book “On the Art of Building.”

On either side of the temple are triumphal arches with inscriptions associating Pope Sixtus IV to Solomon.

In the middle distance are two scenes from the life of Christ, including the “Tribute Money” on the left and the “Stoning of Christ” on the right.

The drapery of the key figures, such as Christ and several apostles, are beautifully illustrated as is their long flowing hair.

The poses of the figures consist of several variations that are repeated, usually in reverse from one side to the other, indicating the use of the same cartoon outline.

The cluster of similar poses can be seen in the number of poses with fingers pointing. The figures are nevertheless graceful, and their features are delicately varied with considerable attention to individual detail.

Perugino’s background landscape consisting of feathery trees against the cloud-filled sky with the bluish-gray hills in the distance was a unique contribution at the time.

Future painters used this background as a reference model, including Raphael, who was his pupil.

Legend of the Papal Conclaves

This fresco was believed to be a good omen in Papal conclaves. The story is told that the cardinal, who is situated beneath the fresco, was more likely to be elected Pope.

Contemporary records indicate at least three popes were located beneath the fresco during the conclaves that elected them as Pope. The Popes elected while positioned below this fresco included: Pope Clement VII, Pope Julius II, and Pope Paul III.

Pietro Perugino (1446 – 1523), born Pietro Vannucci, was an Italian Renaissance painter of the Umbrian school, who developed some of the qualities that found classic expression in the High Renaissance. Raphael was his most famous pupil.

Perugino’s The Delivery of the Keys

Frescoes of the Sistine Chapel by Pietro PERUGINO