The School of Athens by Raphael

“The School of Athens” by Raphael is one of the most famous frescoes of the Italian Renaissance. It is widely reproduced because of its artistry and because of the subjects portrayed.

In 1508, the 25-year old painter Raphael was summoned to the Vatican by Pope Julius II (1503-13) and given the most important commission of his career, the decoration of the Papal Apartments, including the Stanza Della Segnatura.

Raphael used the ample space with imposing coffered vaults to paint imagines of the greatest philosophers, mathematicians, thinkers, and artists of antiquity. All arranged in one area to symbolize the School of Athens. 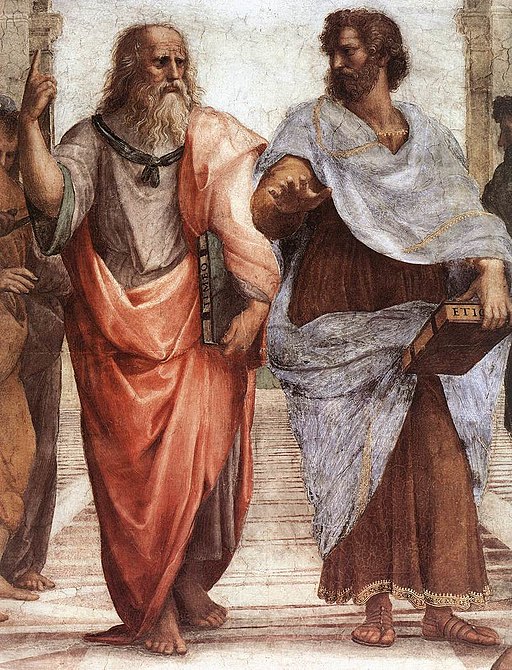 In the center are Plato and Aristotle, two of the most influential philosophers of ancient Greece. Plato is on the left. He was a pupil of Socrates and is pointing up to the sky. His gesture is emphasizing the importance of ideas to the spirit.

His face was painted to resemble the great Renaissance artist and scientist Leonardo da Vinci. On the right is Aristotle, who was Plato’s pupil. His hand is open palm facing down to the earth to emphasize the importance of studying physical evidence as to the source of knowledge.

The fresco itself includes 21 distinct figures set against a backdrop of a school. The mural has images of statues. One statue is of Apollo, the Greek god of light and music, holding a lyre.

The other statue is of Athena, the Greek goddess of wisdom, shown in her Roman form as Minerva.

Below are some of the central historical figures numbered together with a legend for identification. Identification is not precise for many of the figures, and even the ones in the legend below are uncertain.

Determining the identification is difficult because Raphael made no descriptions and left no documents to explain the painting.

While Plato and Aristotle serve as the central figures, the other philosophers depicted lived at different times and were not contemporaries.

Many of them lived before Plato and Aristotle, and only a third were Athenian Greeks. And on the right-hand corner looking out straight at us is a figure that is the self-portrait of Raphael as shown below. 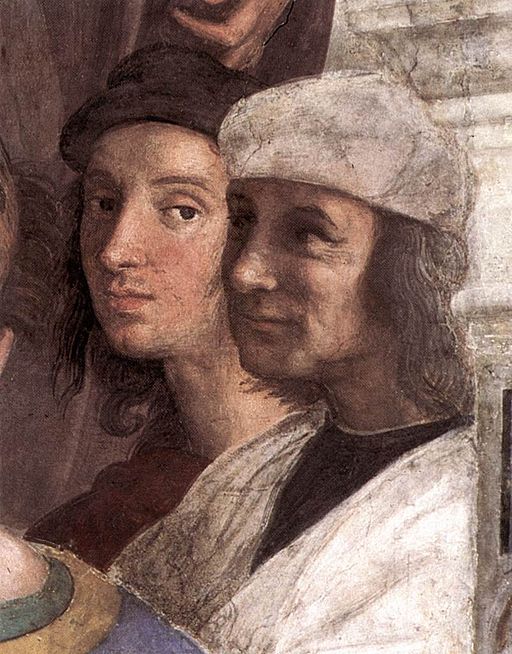 The School of Athens is one of a series of four frescoes painted by Raphael representing different branches of knowledge.

The frescoes are on the walls of the Stanza, include images of philosophy, poetry, law, and theology.

Raphael’s frescos around the room integrate the theme of knowledge, but the School of Athens is considered the best of the series. Following the completion of the School of Athens, Raphael remained in Rome, serving successive popes until he died in 1520.

THANK YOU to our Sponsor:

Raphael was enormously productive, despite his death at 37, he created a large body of work.

Many of Raphael’s works are in the Vatican Palace, where the frescoed Raphael Rooms were central, and the largest, work of his career. The best-known work is The School of Athens in the Vatican.

His career started in Umbria, and then he spent four years in Florence, absorbing the artistic Renaissance of Florence. During his last twelve years in Rome, he mainly worked for two Popes and their associates.

After his death, the influence of his rival Michelangelo was more widespread. Then in the 19th century, Raphael’s harmonious works were reevaluated, and he regained his popularity for his many masterpieces.

The School of Athens, Raphael

A Tour of the Vatican Museums

Raffaello, The School of Athens in the Stanza della Segnatura, Vatican

A Tour the Art of Philosophy

Raphael’s The School of Athens

The School of Athens: Visually Representing the Flow of Knowledge

“One thing I know that I know nothing.
This is the source of my wisdom.”
– Socrates