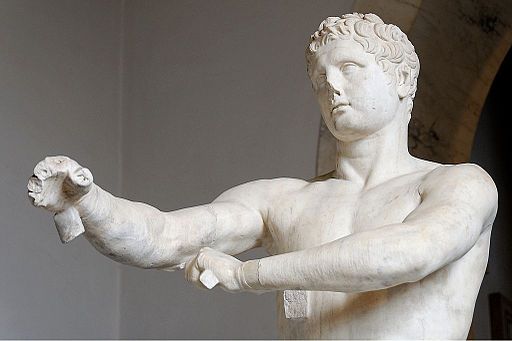 The Vatican Apoxyomenos is a Roman copy from the 1st century AD after a Greek bronze original from about 330 BC by Lysippus. The Apoxyomenos, which is Greek for the “Scraper” is one of the subjects of ancient Greek votive sculpture.

It is a motif of health and fitness rather than an individual portrait. It represents an athlete, caught in the act of scraping sweat and dust from his body with the small curved instrument that the Greeks called a Strigil.

The term Apoxyomenos comes from the Greek verb meaning to clean oneself.

Lysippus posed his subject in a true contrapposto, with an arm outstretched to create a sense of movement and interest from a range of viewing angles.

The Greek artist has managed to render the movement of the arm, which, with its strong forward movement, creates a space and gives depth to the image.

The most renowned Apoxyomenos in Antiquity was that created by Lysippos, in 330 BCE. He was the court sculptor of Alexander the Great.

The bronze original is lost, but it is famous from its description in Pliny the Elder’s accounts, which relates that the Roman general Agrippa installed the bronze Lysippos’s masterpiece in the Baths of Agrippa that he erected in Rome, around 20 BCE.

Later, the emperor Tiberius became so enamored with the sculpture that he had it moved to his bedroom. However, there was a public uproar in the theatre of:

“Give us back our Apoxyomenos.”

The public uproar shamed the emperor Tiberius into returning the famous statue to the people.

A marble copy of the lost original bronze sculpture is now its great replacement and is exhibited at the Vatican Museums in Rome. It was discovered in 1849 when it was excavated in Trastevere.

The statue is slightly larger than lifesize, is characteristic of the new proportions pioneered by Lysippos, with a slightly smaller head and more prolonged and thinner limbs. The Scraper’s head is only one-eighth of the total length of the body.

A strigil is a tool for the cleansing of the body by scraping off dirt, sweat, and oil that was applied before bathing in Ancient Greek and Roman cultures. In these cultures, the strigil was primarily used by men, specifically male athletes.

Strigils were commonly used by individuals who were engaging in vigorous activities, in which they accumulated large amounts of dirt and sweat on their bodies. Wealthy individuals often had slaves to wield the strigils and clean their bodies.

Strigils were not only significant in a practical sense but culturally as well. They are often found in tombs or burials, in some cases, along with a bottle of oil.

Contrapposto is an Italian term that means “counterpoise.” It is used in sculpture to describe a human figure standing with most of its weight on one foot so that its shoulders and arms twist off-axis from the hips and legs in the axial plane.

The method was further popularized by sculptors in the Hellenistic and Imperial Roman periods. Michaelangelo’s statue of David is a famous example of contrapposto.

Lysippos was a Greek sculptor of the 4th century BC. Together with Scopas and Praxiteles, he is considered one of the three most celebrated sculptors of the Classical Greek era, and the Hellenistic period.

Lysippos had a large workshop and many disciples. His immediate circle and many outsiders created replicas of his work.

Apoxyomenos or “Scraper” at the Vatican

A Tour of Rome Museums and Historical Sites

How a famous Greek bronze ended up in the Vatican

“The greatest wealth is to live content with little.”
– Plato