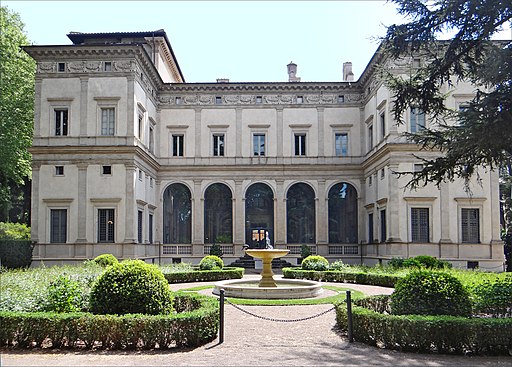 The Villa Farnesina is a Renaissance villa with the main rooms of the Villa, including the Loggia, open to visitors. The Villa designed by Baldassare Peruzzi, with fresco decorations by significant artists including Raphael.

The Villa was built for Agostino Chigi, a wealthy Sienese banker and the treasurer of Pope Julius II. The Sienese artist Baldassare Peruzzi, designed and erected the dwelling between 1506–1510.

The Villa was designed to be an airy summer pavilion, presented a side towards the street, and was given a U-shaped plan.  Today, visitors enter on the south side, and the five-bay loggia which was once opened has been glazed.

Chigi also commissioned the fresco decoration of the Villa by artists such as Raphael, Sebastiano del Piombo, Giulio Romano, and Il Sodoma.

Best known are Raphael’s frescoes on the ground floor, in the loggia depicting the classical and secular myths of Cupid and Psyche, and The Triumph of Galatea.

At first floor level, Peruzzi painted the main salon with an imaginary city and countryside view beyond. In the adjoining bedroom, Sodoma painted scenes from the life of Alexander the Great.

The Villa became the property of the Farnese family in 1577. Later the Villa belonged to the Bourbons of Naples and in 1861 to the Spanish Ambassador in Rome.

The Farnese family was influential in Renaissance Italy. Various members of the family held the titles of Duke. Its most prominent members included:

Several important architectural works and antiquities are associated with the Farnese family, either through construction or acquisition. Buildings include:

Highlights of the Villa Farnesina

“It is better to create than to learn! Creating is the essence of life.”
– Julius Caesar