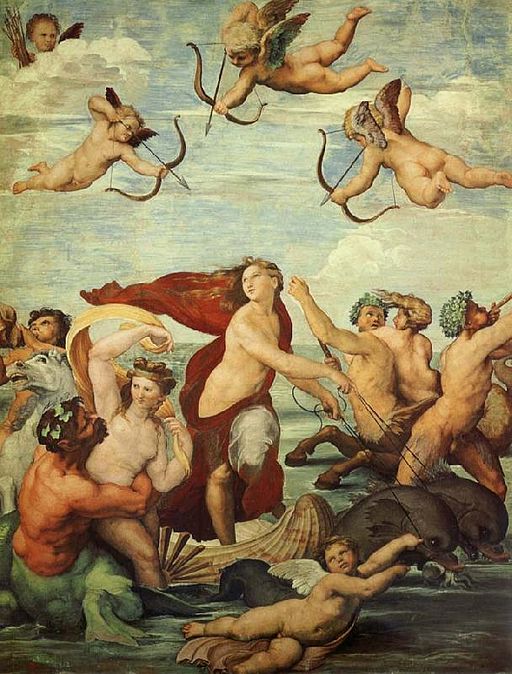 “Triumph of Galatea” by Raphael

“Triumph of Galatea” by Raphael depicts the beautiful Galatea, from Greek Mythology, who had fallen in love with the peasant shepherd Acis. Her consort, the jealous one-eyed giant Polyphemus, after coming upon the two lovers together, lobbed an enormous pillar and killed Acis.

Raphael painted the scene of the nymph’s triumph surrounded by other sea creatures. A Triton, partly man, part fish, is shown abducting a sea nymph, and behind them, on a seahorse, another Triton uses a shell as a trumpet. Galatea rides a shell-chariot drawn by two dolphins.

The “Triumph of Galatea” is a fresco completed about 1514 by the Italian painter Raphael for the Villa Farnesina in Rome. The Villa was built for a Sienese banker who was one of the richest men of that age. The Farnese family later acquired and renamed the Villa.

Some historians have seen in the model for Galatea the image of the famous courtesan, Imperia, who was the wealthy Banker’s lover, as he was the one who commissioned the Villa. However, in a letter to Baldassare Castiglione, Raphael commented that:

“to paint beauty, I should have to see several beauties, provided your Lordship was with me to choose the best. But in the absence of good judges and beautiful forms, I use an idea that comes to my mind.”

Galatea was a sea-nymph referenced in the works of both Homer and Hesiod. She is described as the fairest and most beloved of the Nereids. In Ovid’s Metamorphoses, she is the beloved of Acis, the mortal shepherd. When a jealous rival, the  Cyclops Polyphemus, killed him with a boulder, Galatea then turned his blood into the Sicilian River Acis, of which he became the spirit. This tale can not be found earlier than in Ovid’s work and might have been a fiction invented by the poet to:

“suggested by how the little river springs forth from under a rock.”

Galatea and Acis are two characters from Greek mythology who were later associated together in Ovid’s Metamorphoses. Ovid’s story tells of the love between the mortal Acis and the sea-nymph Galatea.

In the tale, the jealous Cyclops Polyphemus kills Acis, and Galatea transforms her lover into an immortal river spirit. This story has been made the subject of poems, operas, paintings, and statues during and after the Renaissance.

Galatea was a Nereid who loved the shepherd Acis. In Greek mythology, the Nereids were sea nymphs, female spirits of sea waters. They often accompany Poseidon, the god of the sea, and can be friendly and helpful to sailors.

In modern Greek folklore, the term “nereid” has come to be used for all nymphs, fairies, or mermaids, not merely nymphs of the sea. The Nereid Monument from Xanthos, 390–380 BC, can be seen at the British Museum, London.

Raphael was an Italian painter and architect of the High Renaissance. His work is admired for its clarity of form, ease of composition, and together with Michelangelo and Leonardo da Vinci, he is one of the great masters of that period. Raphael was enormously productive, despite his death at 37, leaving a large body of work. Many of his works are in the Vatican Palace, where the frescoed Raphael Rooms were the central, and the largest, work of his career. The best-known work is The School of Athens in the Vatican.

“Triumph of Galatea” by Raphael

The Triumph of Galatea

The triumph of Galatea