“The Feast in the House of Levi” by Paolo Veronese

“The Feast in the House of Levi” by Paolo Veronese depicts a banquet scene in which Christ’s tall figure is represented in the center dressed in a shimmering robe.

The surrounding people are portraited in colorful splendor, all actively participating in the feasts in various poses.

The feast is set amongst great Venitian pillars and archways on a porch with a staircase to either side. The background shows various forms of Italian architecture that were more reminiscent of Venice than the biblical lands.

The name of the painting was changed from its original title of the “Last Supper” after a Roman Catholic Inquisition. After the Inquisition, the “Feast” was understood to refer to an episode in the Gospel of Luke in which Jesus is invited to a banquet.

At the feast, Jesus’s critics complained:

“But the Pharisees and their scribes complained to Jesus’ disciples, “Why do you eat and drink with tax collectors and sinners?”

And Jesus answering said unto them:

“It is not the healthy who need a doctor, but the sick. I have not come to call the righteous, but sinners, to repentance.”

This Veronese painting is one of the most massive canvases painted in the 16th century.

Veronese painted it for the rear wall of the refectory of the Basilica di Santi Giovanni e Paolo, a Dominican friary, as a “Last Supper,” to replace an earlier work by Titian destroyed in the fire of 1571.

“The Feast in the House of Levi” is now in the Gallerie dell’Accademia in Venice. 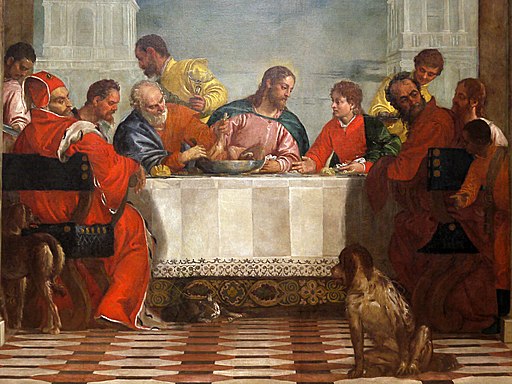 Saint Peter and John are on either side of Christ, with Judas the uneasy figure in the shadows.

In 1573 a court in Venice of the Inquisition interrogated Veronese about the thematic and theological content of  this painting that was then called a “Last Supper.”

Veronese was called to answer for irreverence, indecorum, and heresy. He was asked to explain why the painting contained:

“buffoons, drunken Germans, dwarfs, and other such scurrilities.”

The extravagant costumes and settings were a fantasy version of a Venetian patrician feast. Veronese was ordered to change his painting within three months.

Paolo Veronese instead changed the title to “The Feast in the House of Levi.” This new title referred to an episode from the Gospels, in which the Gospels specified “sinners” as being present in the feast. This change appeared to satisfy the Church.

Manuscript of the Inquisition interrogation of Galliari, Paolo Veronese, July 1573

Paolo Veronese was an Italian Renaissance painter based in Venice, known for large-format history paintings of religion and mythology.

His most famous works are narrative cycles, executed in a dramatic and colorful style, full of architectural settings and pageantry.

His large paintings of biblical feasts were painted for the refectories of monasteries in Venice and Verona and palatial ceilings. Most of these works have remained in their original setting.

“The Feast in the House of Levi” by Paolo Veronese

Paolo Veronese. Feast in the House of Levi

A Virtual Tour of the Gallerie dell’Accademia, Venice

Feast in the House of Levi

Paolo Veronese Feast in the House of Levi, 1573