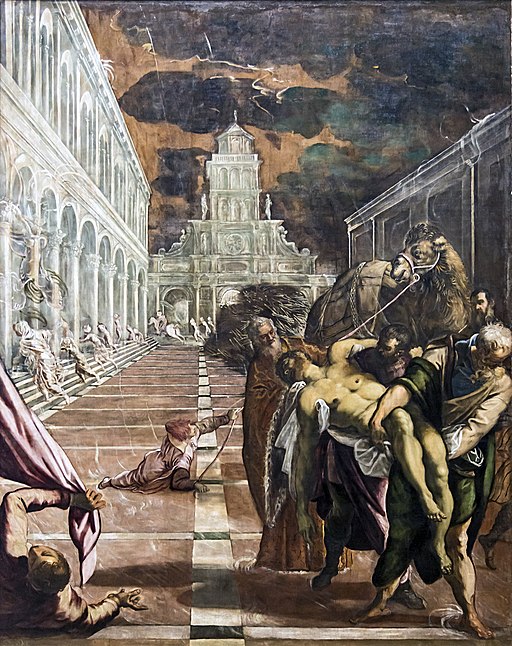 “Saint Mark’s Body Brought to Venice” by Tintoretto depicts three people carry the body of Saint Mark. The sky in the background is red and dark and contains a lightning strike. The threatening sky refers to the hailstorm that came down when the killers of Saint Mark wanted to burn him on a pyre, which can be seen in the center of the painting. In the original painting, this man pulling a cloth was fighting with another man over Saint Mark’s clothing; this part of the art has been cut off.

Venices’s prestige increased with the acquisition, from Alexandria, of relics claimed to be of St Mark the Evangelist in 828. However, the saint died in 68 AD, nearly 800 years before the stealing of his body, so his remains would not have been in the state depicted by Tintoretto.

Tintoretto produced this painting as part of a series of works on Saint Mark for the Sala Capitolare of the Scuola Grande di San Marco. The figures in the foreground are well colored, while the figures in the background are white, nearly transparent with a ghostly feel. The strange red sky with ominous clouds and thunderbolt injects an oppressive, dynamic atmosphere. The background is haunting with its striking, deep perspective lines. Tintoretto himself is portrayed within the work as the bearded man beside the camel. The person holding the head of Saint Mark is the commissioner of this painting, Tomasso Rangone.

St Mark’s Basilica in Venice was founded in the 9th century to house the corpse of St Mark after wily Venetian merchants smuggled it out of Egypt in a barrel of pork fat. Possession of Saint Mark’s remains became the symbol of prestige for the city of Venice. St Mark’s Basilica was built to house the remains. Today the Basilica is the most famous church in Venice and a significant tourist attraction. The winged lions that are visible throughout Venice are the emblem of St Mark.

Relics believed to be the body of Saint Mark were stolen from Alexandria in 828 by two Venetian merchants with the help of two Greek monks and taken to Venice.

A mosaic in St Mark’s Basilica, Venice depicts sailors covering the relics with a layer of pork and cabbage leaves. At the time, Alexandria was controlled by the Abbasid Caliphate, and since Muslims are not permitted to eat pork, this was done to prevent the guards from inspecting the ship’s cargo.

A Basilica dedicated to Saint Mark was erected between the palace and the chapel of Saint Theodore Stratelates, who, until then, had been the patron saint of Venice. In 1063, during the construction of St Mark’s Basilica in Venice, Saint Mark’s relics could not be found. However, according to tradition, the saint himself revealed the location of his remains by extending an arm from a pillar. The newfound remains were placed in a sarcophagus in the Basilica.

St Mark’s Basilica is the most famous of Venice churches and one of the best-known examples of Italo-Byzantine architecture. It lies at the eastern end of the Piazza San Marco, adjacent and connected to the Doge’s Palace.

When the original building burnt down, Venice rebuilt the Basilica. The current building’s structure dates back to the latter part of the 11th century. Much work has gone toward embellishing this, and the famous main façade has an ornamented roofline that is mostly Gothic.

The gold ground mosaics that now cover almost all the upper areas of the interior took centuries to complete. In the 13th century, the external height of the domes was significantly increased. This change made the domes visible from the piazza.

Mark the Evangelist (5 – 68 AD) is the ascribed author of the Gospel of Mark and founded the Church of Alexandria, one of the most important episcopal churches of early Christianity.

According to the Coptic tradition, the pagans in Alexandria resented Mark’s efforts of Evangelism to turn the Alexandrians away from the worship of their traditional gods. In AD 68, they placed a rope around his neck and dragged him through the streets until he was dead.

A Virtual Tour of the Gallerie dell’Accademia, Venice