Portrait of the Four Tetrarchs

The Portrait of the Four Tetrarchs is a sculpture of four Roman emperors dating from around 300 AD. The sculptural group is today fixed to a corner of the façade of St Mark’s Basilica in Venice, Italy.

It was initially part of the decorations of the Philadelphion (“place of brotherly love”), which was a public square located in Constantinople. The “Tetrarchs” was plundered during the Fourth Crusade in 1204, brought to Venice, and incorporated into the St Mark’s Basilica.

These statues were only a small part of the looted treasure taken to Venice from the Fourth Crusade attack on the Byzantine Empire. They were initially designed as two separate sculptures, each consisting of a pair of armored late Roman emperors embracing one another.

The paired statues stand on plinths supported by a console of the same stone. Their backs are connected to the remains of large porphyry columns to which the figures were once attached.

The columns no longer exist, and one emperor pair is missing part of the plinth and an emperor’s foot, which has recently been found in Istanbul.

One statue pair has been sliced vertically and is missing a large portion of the right-hand emperor’s right side, while another vertical slice divides the two figures and has sawn through their embracing arms.

The Portrait of the Four Tetrarchs probably depicts the four rulers of the Empire instituted by Emperor Diocletian – the first Tetrarchy.

There is disagreement as to the identity of these statues and their placement. Still, it is suggested that the Eastern rulers form a pair, and the Western rulers form the other pair, each pair consisting of the senior Augustus and the junior Caesar.

Another possibility is that the two Augusti are depicted in one pair and the two Caesares in the other. A third, older theory is that they represent a dynastic group of the Constantinian dynasty. 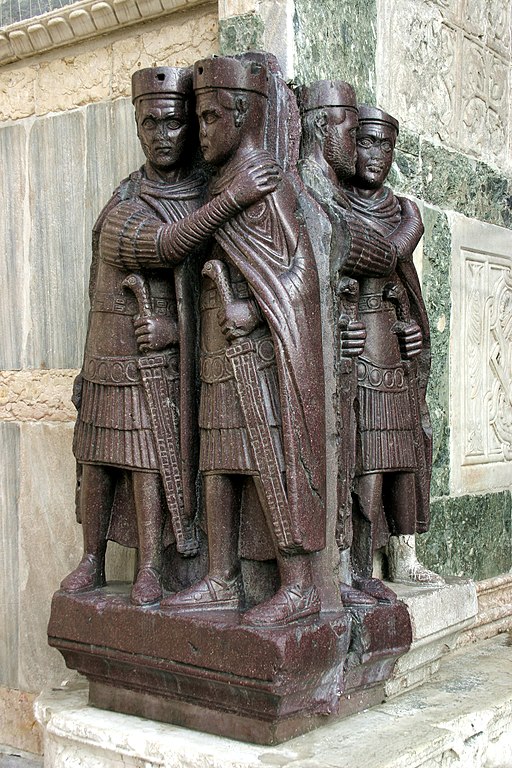 The Fourth Crusade (1202–1204) was a Latin Christian armed expedition called by Pope Innocent III. The stated intent of the expedition was to recapture the Muslim-controlled city of Jerusalem.

However, a sequence of economic and political events culminated in the Crusader army’s 1204 Sack of Constantinople, the capital of the Greek Christian-controlled Byzantine Empire.

The lawless and mercenary Crusaders captured and plundered the city’s enormous wealth, and only a handful of the Crusaders continued to the Holy Land after that.

The fragmentation of the Byzantine Empire followed the conquest of Constantinople. The Fourth Crusade is considered to have solidified the East-West Schism.

The crusade invasion of Constantinople dealt an irrevocable blow to the Byzantine Empire, contributing to its decline, paving the way for Muslim conquests in Anatolia and the Balkans in the following centuries.

The heel portion of the of Tetrarchs. Found at the Bodrum Mosque excavations – Istanbul Archaeology Museum

Spolia from the Latin, ‘spoils’ is the term used for repurposed building stone for new construction or decorative sculpture reused in new monuments.

Spolia was an ancient and widespread practice whereby stone that has been quarried, cut, and used in a built structure, is carried away to be used elsewhere.

Portrait of the Four Tetrarchs is an example of stolen monument fragments from Constantinople, which were taken by Venice as a treasure to be used for Venice’s grandeur.

The Four Tetrarchs were carved from Porphyry. Porphyry was the material of choice for the late Imperial Rome. The vividness of porphyry compared to other stones underscored that these figures had special status worthy of the respect they expected.

Porphyry also symbolized the purple robes Roman emperors would wear to show their status. Similar to porphyry, the purple fabric was extremely difficult to make, as purple required the use of specific snails to make the dye.

The color itself would have caused the public to remember how they were to behave in the presence of the emperors who wore the purple of their office.

The term porphyry is from Ancient Greek and means “purple.” Purple was the color of royalty, and the “imperial porphyry” was a deep purple igneous rock with large crystals of plagioclase.

“Imperial” grade porphyry was prized for monuments and building projects in Imperial Rome and later. Porphyry typically has hardness corresponding to steel and quartz.

From a geology perspective, Porphyry is a term for igneous rocks consisting of large-grained crystals. In its non-geologic, traditional use, the term porphyry refers to the purple-red form of this stone, valued for its appearance.

Portrait of the Four Tetrarchs

Portraits of the Four Tetrarchs

A Virtual Tour of Famous Sculpture

Portraits of the Four Tetrarchs

Byzantine Places: The Portrait of the Tetrarchs

Plunder, war, and the Horses of San Marco

“In Constantinople, more Christians were slaughtered by Christians in the years 342-343 than by all the persecutions by pagans in the history of Rome.”
– Will Durant