“The Jewish Bride” by Rembrandt

“The Jewish Bride” by Rembrandt, gained its name in the early 19th century when an Amsterdam art collector identified the couple as that of a Jewish father bestowing a necklace upon his daughter on her wedding day.

This interpretation is no longer accepted, and the identity of the couple is uncertain. 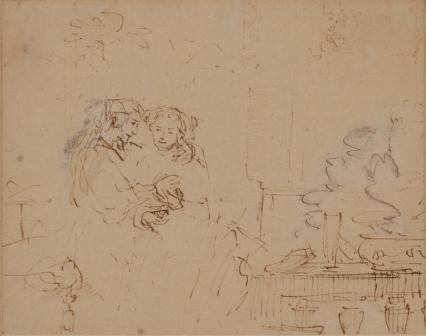 Isaac and Rebecca drawing by Rembrandt

The painting was commissioned as a portrait of a couple in the guise of a biblical pair such as Isaac and Rebecca. It is a brilliant color creation.

The composition is an enduring expression of tenderness and love. The couple’s embrace is at the center of this poignant painting.

The man’s loving gesture is returned with a gentle caress. The couple shows all the signs of tenderness towards each other, so this is not a typical seduction scene, which was a favorite at the time.

This painting shows Rembrandt’s genius for expressing human emotion and is one of the great portrait paintings of the last period of his career. 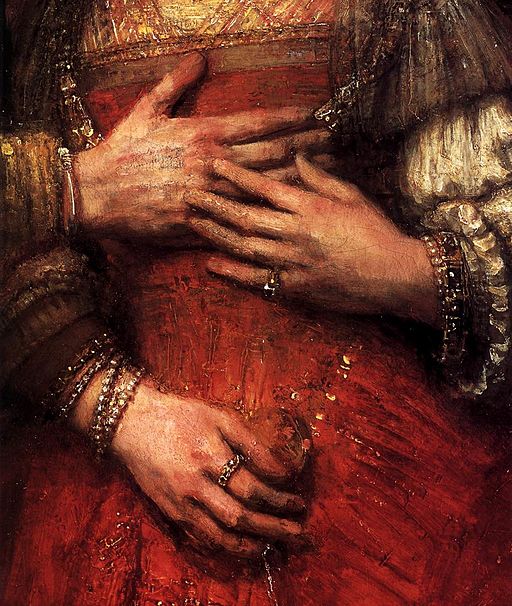 Detail of the hands and jewelry

“I should be happy to give ten years of my life, if I could go on sitting here in front of this picture for a fortnight, with only a crust of dry bread for food.”

He is one of the great artists in the history of art. Rembrandt’s works depict a range of styles and subjects, from portraits to landscapes, genre scenes.

He painted allegorical and historical scenes, biblical and mythological themes, as well as animal studies.

Living during a period of great wealth and cultural achievement, the Dutch Golden Age, he achieved success early in his career as a portrait painter.

However, Rembrandt lived beyond his means. Personal tragedy and financial hardships marked his later years. Rembrandt was buried as a poor man in an unknown grave, owned by the church.

After twenty years, his remains were destroyed, as was customary for poor people at the time.

The self-portraits form a visual diary of the artist over the forty years of his career. There was a gradual shift from engravings, more numerous until the 1630s, to paintings, which became more frequent after that.

Rembrandt’s significant contribution to the history of printmaking was his transformation of the etching process from a relatively new reproductive technique into a pure art form.

His reputation as one of the greatest etcher of the medium was established in his lifetime. Few of his paintings left the Dutch Republic during his lifetime, but his prints circulated throughout Europe, and his wider reputation was initially based on them alone.

“Without atmosphere, a painting is nothing.”
– Rembrandt