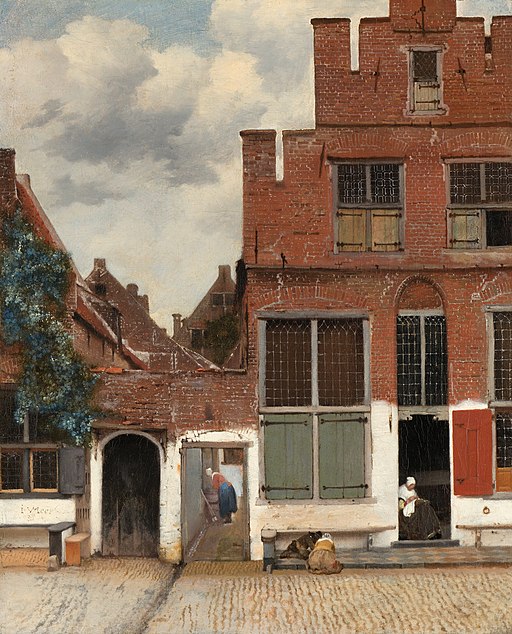 “The Little Street” by Johannes Vermeer

“View of Houses in Delft,” also known as “The Little Street” by Johannes Vermeer, depicts a quiet street, with four people conduction routine tasks in everyday life in a Dutch town.

It is one of only three Vermeer paintings of views of Delft, and it captures a perspective that Vermeer knew well.

The house on the right in this painting belonged to Vermeer’s aunt, and Vermeer’s mother and sister also lived on the same canal, diagonally opposite.

The composition of straight lines and the triangle of the houses give the painting a vibrancy, and that reflects reality.

The walls, stones, and brickwork are painted in a solid color of limited pigments, which provides a robust and concrete aspect to the painting.

This painting is a relatively small picture and is signed on the left-hand corner below the window, “I V MEER.”

Johannes Vermeer is one of the Netherlands’ most prominent Dutch painters. He painted relatively few paintings, most of which had common attributes such as the use of yellow and blue tones, the depiction of women, and the depiction of domestic settings.

Vermeer offered glimpses into the lives of Holland’s cultured citizens. Although little is known about Vermeer’s life, historians do know of his baptism and life in Delft, where he was raised by a craftsman father and married a Catholic girl by the name of Catherina Bolnes.

Camera obscura, also referred to as pinhole image, is the natural optical phenomenon, It occurs when an image of a scene at the other side of a screen is projected through a small hole in that screen.

The image appears reversed and inverted on a surface opposite to the opening. The term “camera obscura” also refers to constructions or devices that make use of the principle within a box, tent, or room.

While the technical principles of the camera obscura have been known since antiquity, the extensive use of the technical concept in producing images with a linear perspective in paintings started in the Western Renaissance and the scientific revolution.

Camerae obscurae with a lens in the opening has been used since the second half of the 16th century. The technique became famous as an aid for drawing and painting.

Highlights of the Rijksmuseum

How did Vermeer paint his masterpiece?

“What’s the use of candle and glasses if the owl doesn’t want to see.”
– Dutch Proverb