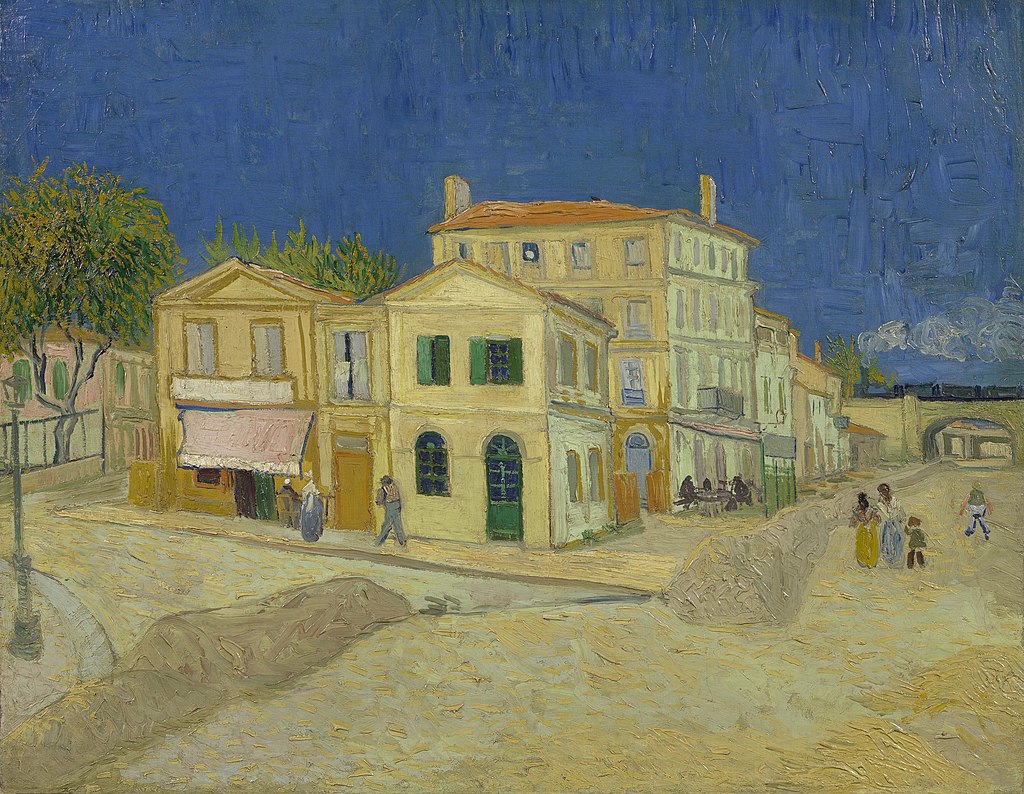 “The Yellow House” by Vincent van Gogh depicts the building and surrounds where Van Gogh rented four rooms in May 1888.

Van Gogh rented two large rooms on the ground floor, one which served as his workshop and the other as the kitchen.

The window on the first floor near the corner with both shutters open is that of Van Gogh’s guest room, where Paul Gauguin lived for nine weeks from late October 1888.

Behind the next window, with one shutter closed, is Van Gogh’s bedroom. The house was the right-wing of 2 Place Lamartine, Arles, France.

The Yellow House itself no longer exists. It was damaged in a bombing raid by the Allies in 1944 and was later demolished.

The “Yellow House” is famous in Van Gogh’s story because of the art he created to help decorate his house and because it was the time of his significant artistic breakthroughs.

Van Gogh wanted to furnish and decorate the Yellow House before he could fully move in, but he was able first to use it first as a studio.

The paintings that he created for the decoration of the rooms in the “Yellow House” included some of his most famous artworks:

The Yellow House is also remembered as the place where he argued with Gauguin and the events which led to Van Gogh’s mutilation of his ear.

“The Street” by Vincent van Gogh

Initially, Van Gogh titled the painting as “The House and its environment.” Later he changed it to “The Street,” paying homage to a suite of sketches showing streets in Paris, recently published in Le Figaro.

To the right of the Yellow House, the Avenue Montmajour runs down to the two railway bridges.

The first bridge line, showing a train passing, was the local connection to Lunel, which is on the right bank of river Rhône. The second bridge serviced the Paris Lyon Méditerranée train line.

In the left foreground corner is the beginning of the public gardens on Place Lamartine with a pedestrian walk protected by the earthworks.

The earthworks running up Avenue Montmajour from the left towards the bridges served the gas pipe, which allowed Van Gogh to have installed a gaslight for his art studio.

The restaurant where Van Gogh used to have his meals was in the building painted pink close to the left edge of the painting.

The painting was executed in September 1888, at which time Van Gogh sent a sketch of the composition to his brother Theo plus a description.

‘Also a sketch of a 30 square canvas representing the house and its setting under a sulfur sun under a pure cobalt sky. The theme is a hard one! But that is exactly why I want to conquer it. Because it is fantastic, these yellow houses in the sun and also the incomparable freshness of the blue. All the ground is yellow too. I will soon send you a better drawing of it than this sketch out of my head.”

The Yellow House at Arles and letter by Vincent van Gogh

What was it like to live inside Vincent Van Gogh’s Yellow House?