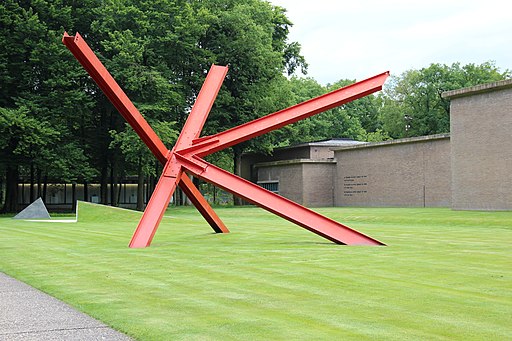 The Kröller-Müller Museum is a national art museum and sculpture garden, located in Otterlo in the Netherlands. The museum, founded in 1938 by art collector Helene Kröller-Müller within the grounds of her former estate, which is now a national park.

It houses the second-largest collection of paintings by Vincent van Gogh, after the Van Gogh Museum.

The Kröller-Müller Museum is also famous for its large sculpture garden, within the forest park, of more than 75 acres (30 ha) and one of the largest in Europe, with an excellent collection of modern and contemporary sculptures.

Virtual Tour of the Kröller-Müller Museum

Highlights Tour of the Kröller-Müller Museum

“Café Terrace at Night” by Vincent van Gogh depicts the terrace of the café on the Place du Forum in Arles, France at night. The night is painted with no black in the sky, it features only a blue sky with Van Gogh’s unique star motifs.

The Cafe is illuminated with sulfur pale yellow and citron green. Van Gogh painted the view looking south towards the lit terrace of the famous coffee house.

He contrasted the brightly lit Cafe with the darkness of the rue du Palais, which led up to the wall of buildings and towards the tower of a former church, which is now Musée Lapidaire.

On the right, Van Gogh painted the light from the shop windows as well and some green branches of the trees surrounding the place.

“Le Chahut” by Georges Seurat representing the Can-Can dance at the Moulin Rouge in the artist’s pointillist technique. The Can-Can is a high-energy, physically demanding dance that became a famous French music-hall dance in the 1840s.

The Can-Can or “Le Chahut” in French was originally danced by both sexes, as depicted by Seurat. The dance featured the vigorous manipulation of skirts and petticoats by the women, along with high kicks.

Musicians occupy the lower left of the painting, one of whom is centrally located, his back turned toward the viewer, with his double-bass erected to the left. A row of dancers, two women, and two men with their legs raised occupy the upper right.

They are characterized by curves and rhythmic repetition, creating a sense of dynamical movement.

The background consists of ornate cabaret-style lighting fixtures, and a few members of the audience sitting in the front row, their faces looking up to the performance.

“The Cyclops” by Odilon Redon depicts the love of the Cyclops Polyphemus for the naiad Galatea who is shown lying naked amongst colorful wildflowers.

Polyphemus is hiding behind the rocky terrain, too shy to confront his love interest directly. The Cyclops seems to love his victim, gingerly guarding her while simultaneously keeping her selfishly to himself.

The unnaturally large eye is the most prominent part of the painting. The eye appears as the symbol of Polyphemus’s soul and of his mysterious, inner world.

Odilon Redon portrays a world inhabited by fairies, monsters, spirits, and other fantasy figures. As a representative of the art movement of symbolism in the late 19th century, he depicted works of the subconscious, with extraordinary dreamy worlds.

“Road with Cypress and Star” by Vincent van Gogh

“Road with Cypress and Star” by Vincent van Gogh is the last painting he made in Saint-Rémy-de-Provence, France. This view is not an actual landscape scene but a composition of the symbols or images that became important to Van Gogh and which expressed his feeling at this point in his life.

The large cypress tree in the middle of the composition acts like a giant obelisk dividing the piece. The pair of travelers are on their journey of companionship that Van Gogh had been seeking for so long and could not find. There are also two people in the horse-driven cart.

Van Gogh entered the Saint-Paul-de-Mausole asylum, a former monastery in Saint-Rémy in May 1889. Van Gogh had two cells with barred windows, one of which he used as a studio.

He was allowed short supervised walks, during which time he painted cypresses and olive trees, including this painting “Road with Cypress and Star.” Some of his works from this time are characterized by swirling stars in the night sky, such as this painting and “The Starry Night.”

Van Gogh was experimenting with his use of color and brushwork. Many of his works at this time are composed of graceful forms and swirling lines. The short, rhythmic wavy brushstrokes placed side by side engenders this painting with dynamism.

“Portrait of Joseph Roulin” by Vincent van Gogh is one of six paintings that van Gogh painted of his close friend, from the southern French town of Arles.

Joseph Roulin, the local postman, was one of his favorite sitters in Arles. Van Gogh wrote to his brother: “I am now at work with another model, a postman in a blue uniform, trimmed with gold, a big bearded face, very like Socrates.”

Van Gogh painted several portraits of Joseph Roulin and Madame Roulin, as well as their children. The “Roulin Family” is a group of portrait paintings that Vincent van Gogh painted in Arles in 1888 and 1889.

Van Gogh loved to paint portraits. However, it was difficult for financial reasons for him to find models. Fortunately, the entire family agreed to sit for Van Gogh over several sittings, and each was a delight for Van Gogh.

A Virtual Tour of Netherland’s Museums

Introduction to the Kröller Müller Museum

“An ounce of prevention is worth a pound of cure.”
– Dutch Proverb