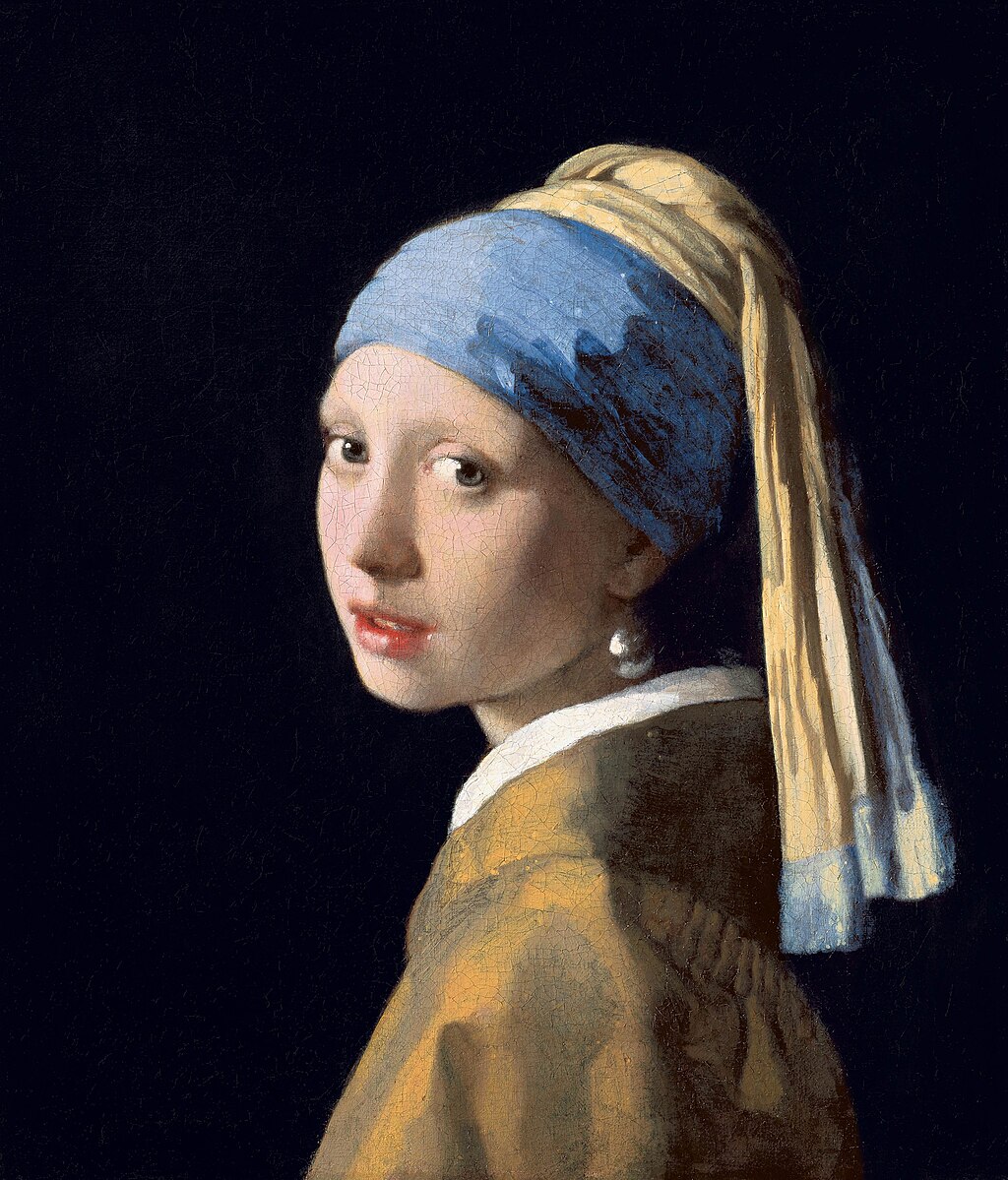 “Girl with a Pearl Earring”

“Girl with a Pearl Earring” by Johannes Vermeer portrays a girl wearing an exotic dress, an Eastern turban, and an improbably large pearl earring.

The work is signed “IVMeer” and is one of Vermeer’s most famous paintings. However, very little is known about the background story to this picture. Also, the identity of the girl is a mystery.

He is particularly renowned for his excellent treatment in the use of light, and this masterpiece typifies his technique. T

his painting was initially titled “Girl with a Turban,” and in the second half of the twentieth century that the name changed to “Girl with a Pearl Earring.”

There has been significant speculation about the girl’s identity in this painting. Historically it was believed to be Vermeer’s eldest daughter, Maria, who was about twelve or thirteen-years-old when this painting was created.

However, there is no evidence for this proposition. The mystery about the girl’s identity inspired a historical novel entitled “Girl with a Pearl Earring” in 1999 by Tracy Chevalier.

The novel fictionalized the circumstances of the painting’s creation, which identifies the girl as a fictional servant. The book also inspired a film and a play of the same name.

Vermeer was recognized during his lifetime in Delft and The Hague, but his modest celebrity gave way to obscurity after his death.

Since the 20th century, Vermeer’s reputation has improved, and he is now acknowledged as one of the greatest painters of the Dutch Golden Age.

There are only thirty-four surviving paintings by Vermeer. They are extremely challenging to date with accuracy. Vermeer painted mostly domestic interior scenes, and most of his pictures are set in the rooms of his house in Delft.

Vermeer was not wealthy, as he left his family in debt after his death. He produced relatively few paintings compared to his contemporaries.

However, his reputation has skyrocketed in the last few hundred years, and he is particularly renowned for his excellent treatment and use of light in his work.

Girl with a Pearl Earring

A Virtual Tour of Netherland’s Museums

“The pearl is the queen of gems and the gem of queens.”
– Anon

“I feel undressed if I don’t have my pearls on. My pearls are my security blanket.”
– Sarah Churchill

“It is the hour of pearl—the interval between day and night when time stops and examines itself.”
– John Steinbeck

“The rarest things in the world, next to a spirit of discernment, are diamonds and pearls.”
– Jean de la Bruyere

“Whatever pearl you seek, look for the pearl within the pearl!”
– Rumi

“I favor pearls on screen and in my private life.”
– Grace Kelly

“A woman needs ropes and ropes of pearls.”
– Coco Chanel

“The Pearl Principle – No inner irritation, no pearl.”
– Surya Das

“In diving to the bottom of pleasure, we bring up more gravel than pearls.”
– Honore de Balzac

Why is Vermeer’s “Girl with the Pearl Earring” considered a masterpiece?