This statue of Amun is a fragment from the figure of the god Amun, belonging to a group sculpture, commemorating the act of coronation.

The original composition would have shown the god Amun sitting on the throne. He would be touching the crown on the head of the ruler, kneeling in front of him, entrusting him with the gesture of ruling over the Egyptian land.

This statue fragment was found at The Karnak Temple Complex, which comprises a vast mix of decayed temples, chapels, pylons, and other ancient structures in Egypt.

The area around Karnak was the ancient Egyptian “The Most Selected of Places” and the principal place of worship of the eighteenth dynasty Theban Triad with the god Amun as its head.

The Theban Triad are three Egyptian gods that were the most popular in the area of Thebes, in Egypt. The group consisted of Amun, his consort Mut and their son Khonsu.

These gods were the primary objects of worship of the massive temple complex at Karnak, although temples and shrines exist throughout Egypt.

Amun, also known in Greek as Ammon, was a principal ancient Egyptian deity. After the rebellion of Thebes against the Hyksos, Amun acquired national importance, expressed in his fusion with the Sun god, Ra, as Amun-Ra.

Amun-Ra retained chief significance in the Egyptian pantheon throughout the New Kingdom, except for a short period under Akhenaten.

Amun-Ra, in this period, 16th to 11th centuries BC, held the position as the champion of the poor and troubled and was the essential personal deity.

His status as King of Gods developed to the point of virtual monotheism where other gods became manifestations of him.

As the chief deity of the Egyptian Empire, Amun-Ra also came to be worshipped outside Egypt, especially in Libya and Nubia. As Zeus Ammon, he began to be identified with Zeus in Greece.

Amun was worshipped by the Greeks as Ammon, with temples and statues at Thebes and Sparta. At Megalopolis, Greece, the god was represented with ram horns on his head.

Ammon was often depicted as having a ram’s horns on his head. The Greeks combined features of the Greek supreme god Zeus with elements of the Egyptian god Ammon-Ra in depictions of Zeus Ammon.

Such was Ammon’s reputation among the Classical Greeks that when Alexander the Great occupied Egypt, he was declared “the son of Amun” by the oracle. Alexander, after that, considered himself divine.

Even during Greek occupation, Amun, identified by the Greeks as a form of Zeus, continued to be the principal local deity of Thebes.

Several words in English derive from Amun via the Greek name, Ammon, such as ammonia and ammonite. The shelled Protozoa and extinct Ammonites were named after Ammon.

The naming was inspired because they bear spiral shells resembling Ammon’s horns from the famous Zeus Ammon statue. The Greek portrait sculpture of Zeus Ammon featured ram’s horns on the side of his head.

Also, in our hippocampus, the oldest part of our brain, some subfields are called the “cornu ammonis,” literally “Amun’s Horns,” Again due to the horned appearance of the dark and light bands of cellular layers. 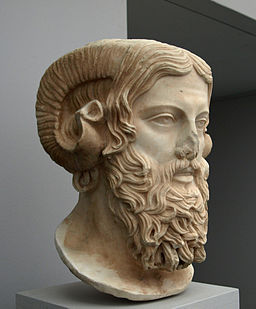 The history of Amun as the patron god of Thebes begins in the 20th century BC, with the construction of the Precinct of Amun-Re at Karnak.

Major construction work in the Precinct of Amun-Re took place during the 18th dynasty when Thebes became the capital of unified ancient Egypt.

The Karnak Temple Complex, commonly known as Karnak, comprises a vast mix of decayed temples, chapels, pylons, and other buildings near Luxor in Egypt.

Construction at the complex began during the Middle Kingdom and continued into the Ptolemaic period, although most of the surviving buildings date from the New Kingdom.

The area around Karnak was the ancient Egyptian Ipet-isut (“The Most Selected of Places”) and the principal place of worship of the eighteenth dynasty Theban Triad with the god Amun as its head. It is part of the monumental city of Thebes.

In Search Of History – Karnak: Temple Of The Gods

“For every joy, there is a price to be paid.”
– Egyptian Proverb