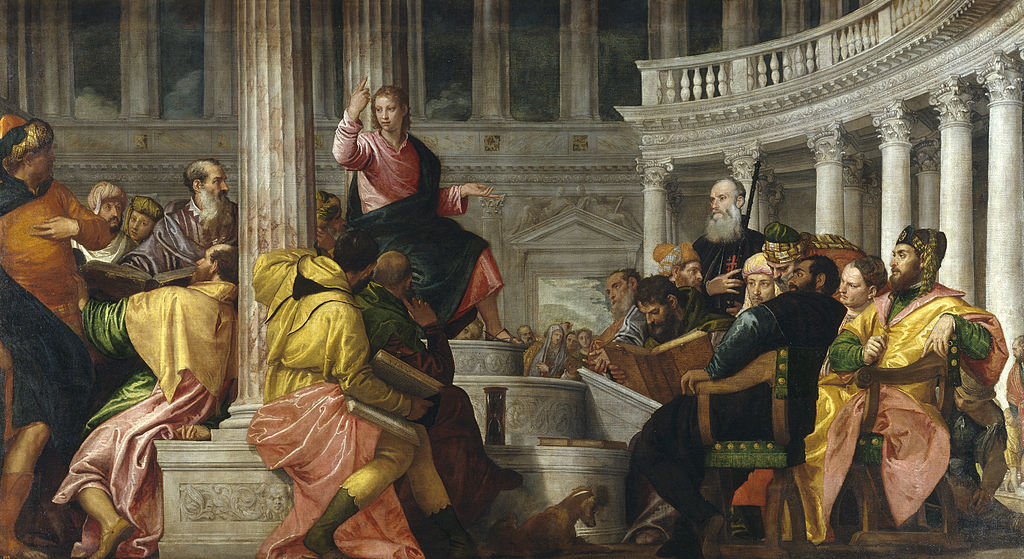 “Christ among the Doctors” by Paolo Veronese

“Christ among the Doctors” by Paolo Veronese depicts the story from the final passage on Christ’s childhood, in Luke 2, 41-50, when, at the age of 12, he was taken to Jerusalem by his parents to celebrate Passover.

The Biblical story of the “Finding in the Temple” also called in art by the standard titles of “Christ among the Doctors” or “Disputation.” It was an episode in the early life of Jesus, and the only event of the later childhood of Jesus mentioned in a gospel.

The episode describes how Jesus, at the age of twelve, accompanies Mary and Joseph, and their relatives and friends to Jerusalem on pilgrimage during Passover.

After a day of travel, they realized Jesus was missing, so they returned to Jerusalem, finding Jesus three days later. Mary and Joseph found Jesus in The Temple in an in-depth discussion with the elders.

The elders were amazed at his learning, especially given his young age. When admonished by Mary, Jesus replied:

“Did you not know that I must be in my Father’s house?”

Paolo Veronese shows Christ’s theological superiority by emphasizing his placement towards the top of the composition’s axis. The elders look on as he enumerates his arguments with his fingers.

One of the older onlookers with a beard, who is holding a pilgrim’s staff, is most likely the person who commissioned this painting. He wears the habit of a Knight of the Holy Sepulcher, indicating he had conducted a pilgrimage to the Holy Lands.

Mary and Joseph are in the background, just having entered the Temple. Jesus and the elders intent on their discussions, have not noticed them yet.

A man with his back turned to the viewer, holds a book with the number MCXLVIII (1548) on the edge of the book. This date has generated debate and speculation among modern specialists.

The date 1548 does not concord with the period of 1565 as the earliest possible date for the painting’s creation.

This painting was recorded as being in Padua in 1648, but by 1686 it was in Madrid, possibly brought back between 1649 and 1651 by Diego Velázquez after his second trip to Italy.

Christ among the Doctors

The event of the “Finding in the Temple” was frequently depicted in art and was a common component in cycles of the Life of the Virgin as well as the Life of Christ.

In early Christian depictions, Jesus is usually shown in the center, seated on a raised dais surrounded by the elders.

The gesture usually made by Jesus, pointing to his upraised figure, was a conventional gesture expressing the act of expounding text.

These depictions derive from classical compositions of professors with their students and are similar to medieval depictions of contemporary university lectures.

This subject of “Christ among the Doctors” has attracted few artists since the 19th century.

“Christ among the Doctors” by Paolo Veronese

Veronese Christ Among the Doctors

A Virtual Tour of the Prado Museum

Meet the masters of Renaissance Venice