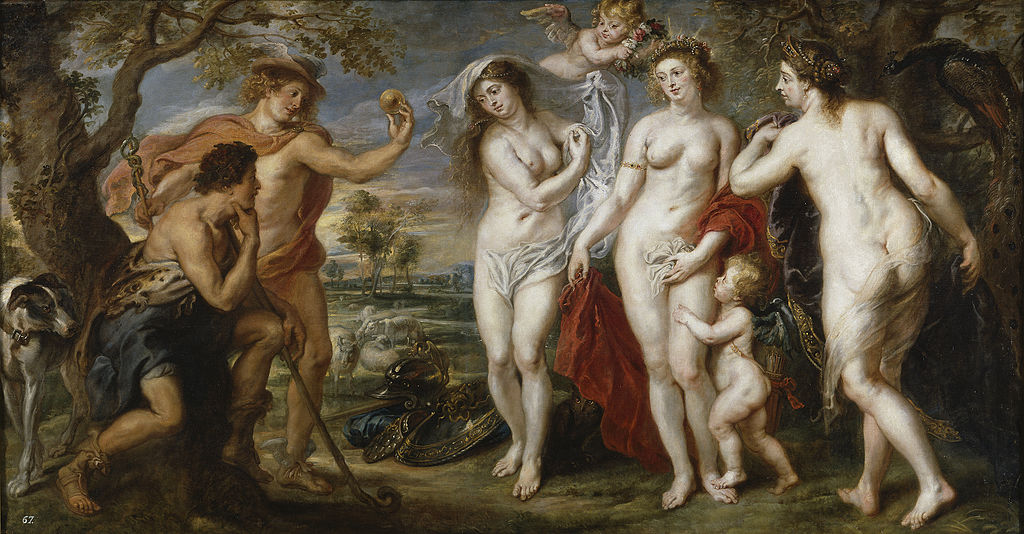 “The Judgment of Paris” by Peter Paul Rubens

“The Judgment of Paris” by Peter Paul Rubens shows Rubens’ version of idealized feminine beauty, with the goddesses Venus, Minerva, and Juno on righthand. Mercury accompanies Paris on the left side.”

The story of the Judgement of Paris offered artists the opportunity to depict a beauty contest between three beautiful female nudes.

The Greek myth started when Zeus held a banquet in celebration of the marriage of Peleus and Thetis, the parents of Achilles.

Unfortunately, Eris, the goddess of discord, was not invited, as she would have made the party unpleasant for everyone.

Eris arrived uninvited and angry at the celebration with a golden apple, which she threw into the proceedings as a prize of beauty.

Three goddesses claimed the apple Hera (Juno), Athena (Minerva), and Aphrodite (Venus). They asked Zeus to judge which of them was fairest, reluctant to decide himself; he declared that Paris, a Trojan mortal, would judge their cases.

With Hermes (Mercury) as their guide, the three beautiful goddesses confronted Paris. After failing to judge their beauty with their clothing on, the three goddesses stripped nude to convince Paris of their worthiness.

While Paris inspected them, each attempted to bribe him. Hera offered to make him king of Europe and Asia. Athena offered wisdom and skill in war.

Aphrodite offered the world’s most beautiful woman, Helen of Sparta, wife of the Greek king Menelaus. Paris accepted Aphrodite’s (Venus) gift and awarded the apple to her.

The Greeks’ expedition to retrieve Helen from Paris in Troy is the mythological basis of the Trojan War. Athena’s rage at losing makes her join the Greeks in the battle against Paris’ Trojans.

Peter Paul Rubens was a Flemish artist who is considered the most influential artist of the Flemish Baroque tradition.

His compositions referenced classical and Christian history and emphasized movement, color, and sensuality.

The Judgment of Paris

The Judgment of Paris by Peter Paul Rubens

The Judgment of Paris

The Genius of Rubens

“White is poison to a picture: use it only in highlights.”
– Peter Paul Rubens