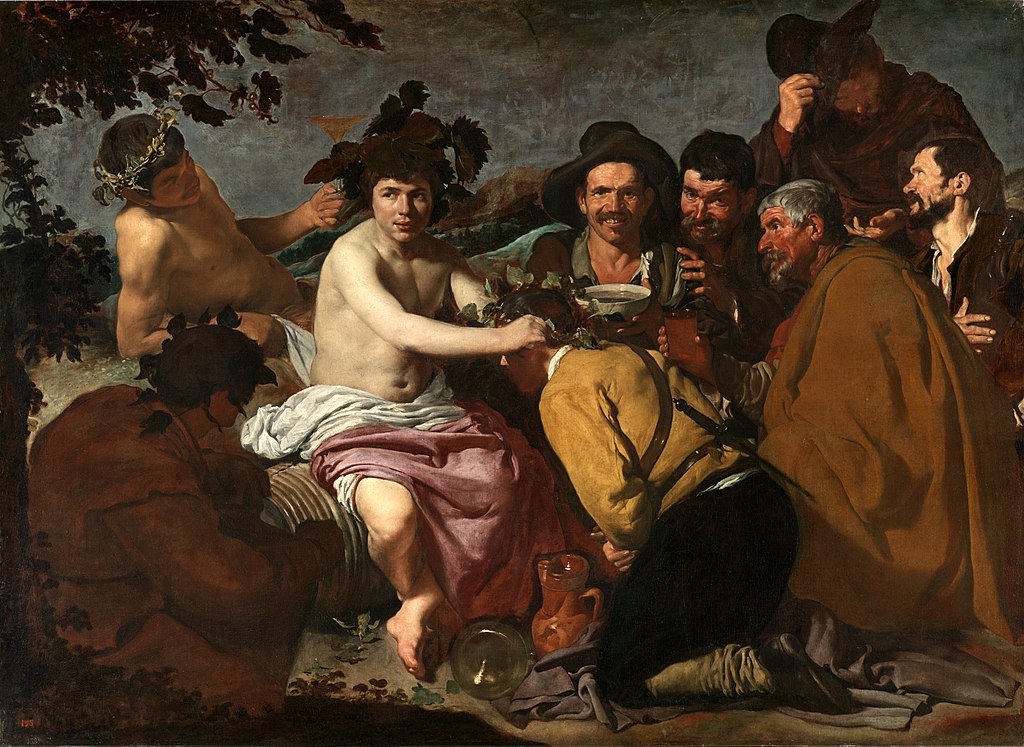 The Triumph of Bacchus by Diego Velázquez

“The Triumph of Bacchus” by Diego Velázquez depicts Bacchus surrounded by drunks. The work represents Bacchus as the god who rewards men with wine, releasing them from their problems. Bacchus was considered an allegory of the liberation of man from the slavery of daily life. Commissioned by King Philip IV, Velázquez had studied the king’s collection of Italian paintings and especially the treatment of mythological subjects. In this work, Velázquez adopted a realist treatment of a mythological subject, an approach he pursued during his career.

The composition is divided into two halves. On the left, is the luminous Bacchus figure, and the character behind him is represented in the traditional loose robes used for depictions of classical myth. The idealization of the Bacchus’s face is highlighted by the light which illuminates him in a classical style. The right side of the composition presents drunkards of the streets that invite the viewer to join their party. There is no idealization present in their darker worn-out faces who wear the contemporary costume of poor people in 17th-century Spain. The figure kneeling in front of the Bacchus is younger and better dressed than the others, with a sword and boots. The light which illuminates Bacchus is absent on the right side. There are also various elements of naturalism in this work, such as the bottle and pitcher, which appear on the ground.

Diego Velázquez was a Spanish painter, who was the leading artist in the court of King Philip IV, and one of the most important painters of the Spanish Golden Age. From the first quarter of the nineteenth century, Velázquez’s artwork was a model for the realist and impressionist painters, in particular, Édouard Manet. Many modern artists, including Picasso and Dalí, have paid tribute to Velázquez by recreating several of his most famous works.

Bacchus is the Roman name for Dionysus, the Greek god of wine, ritual madness, and theater in ancient Greek religion and myth. Wine played an important role in Greek and Roman culture, and the cult of Bacchus or Dionysus was the main religious focus for its unrestrained consumption. His festivals were the driving force behind the development of Greek theater.

The Triumph of Bacchus by Diego Velázquez: Did you know?

The Triumph of Bacchus

“Music is the wine which inspires one to new generative processes, and I am Bacchus who presses out this glorious wine for mankind and makes them spiritually drunken.” – Ludwig van Beethoven

“Prepare yourselves for the roaring voice of the God of Joy!” – Euripides, The Bacchae

“Quickly, bring me a beaker of wine so that I may wet my mind and say something clever.” – Aristophanes

“Bacchus, ever fair and ever young.” – John Dryden

“Eat and carouse with Bacchus, or munch dry bread with Jesus, but don’t sit down without one of the gods.” – D. H. Lawrence

“Cupid and Bacchus my saints are,
May drink and love still reign,
With wine, I wash away my cares,
And then to cunt again.”
– John Wilmot

“Bacchus: A convenient deity invented by the ancients as an excuse for getting drunk.” – Ambrose Bierce

“For when we quaff the generous bowl,
Then sleep the sorrows of our soul.
Let us drink the juice divine,
The gift of Bacchus, the god of wine.
When I take wine, my cares go to rest.”
– Anacreon

“His sculpture would have joy in it, try to capture the sense of fertility of Dionysus, the nature god, the power of the intoxicating drink that enabled a man to laugh and sing and forget for a while the sorrow of his earthly miseries.” – Irving Stone, The Agony and the Ecstasy

“Wine gives strength to weary men. and
And wine can of their wits the wise beguile.
Make the sage frolic and the serious smile. and
Let those who drink not, but austerely dine,
Dry up in law; the muses smell of wine. and
No poem was ever written by a drinker of water. and
Bacchus opens the gate of the heart. and
Might to inspire new hopes and powerful
To drown the bitterness of cares.”
– Homer

“Bacchus, that first from out the purple grape
Crush’d the sweet poison of misused wine.”
– John Milton

“I believe that even a smattering of such findings in modern science and mathematics is far more compelling and exciting than most of the doctrines of pseudoscience, whose practitioners were condemned as early as the fifth century B.C. by the Ionian philosopher Heraclitus as “nigh -walkers, magicians, priests of Bacchus, priestesses of the wine-vat, mystery-mongers.” But science is more intricate and subtle, reveals a much richer universe, and powerfully evokes our sense of wonder.”
Carl Sagan

“I love drinking now and then. It defecates the standing pool of thought. A man perpetually in the paroxysm and fears of inebriety is like a half-drowned stupid wretch condemned to labor unceasingly in water, but a now-and-then tribute to Bacchus is like the cold bath, bracing and invigorating.”
– Robert Burns

“Bacchus ever fair and young, Drinking joys did first ordain. Bachus’s blessings are a treasure. Drinking is the soldier’s pleasure, Rich the treasure, Sweet the pleasure- Sweet is pleasure after pain.
– John Dryden

“Far from me be the gift of Bacchus–pernicious, inflaming wine, that weakens both body and mind.” – Homer

“Here burning Bacchus rules tonight! No poems can live long or please that are written by water drinkers.”
– Horace