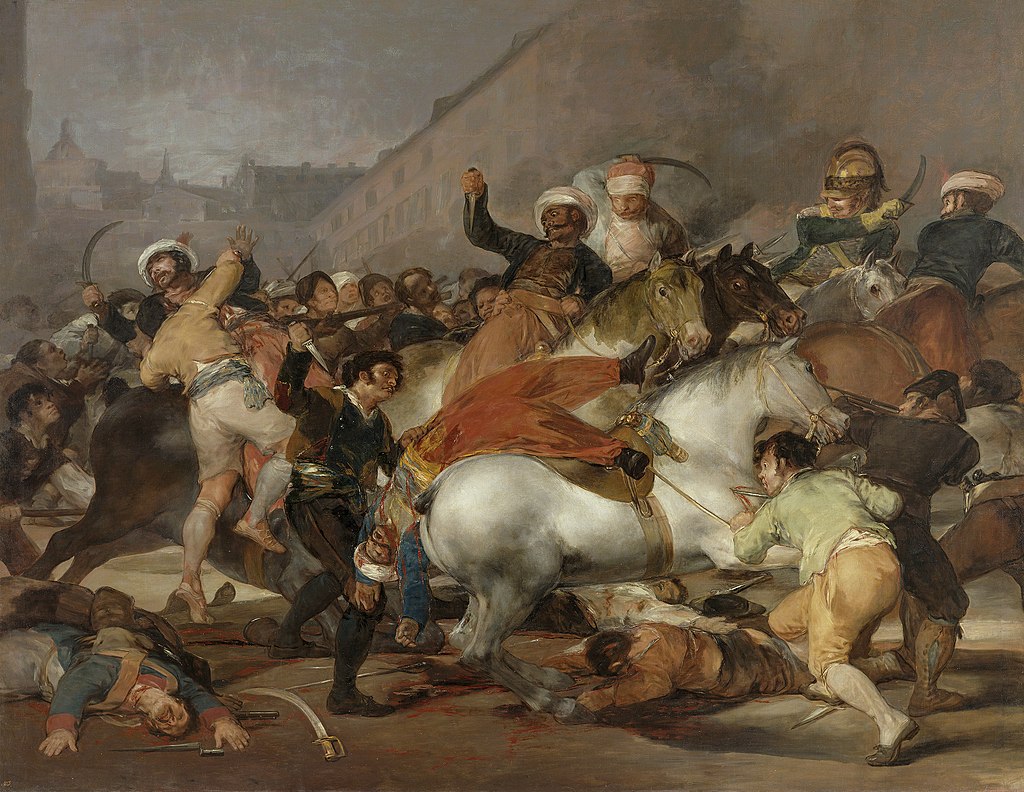 The crowd saw the Mamelukes as Moors, which provoked an angry response. Instead of dispersing, the crowd turned on the charging Mamelukes, resulting in a ferocious fight. Goya chose not to paint the focal point to emphasize the chaos of the drama.

This painting is a companion to the painting The Third of May 1808. Both pictures were commissioned in 1814, after the expulsion of Napoleon’s army from Spain.

Goya chose to portray the citizens of Madrid as unknown heroes using the small crude weapons to attack a professional, occupying army.

The depiction of public uprising did not please the Spanish king when he returned after the people’s rebellions, so the paintings were not hung publicly until many years later.

The Dos de Mayo or Second of May Uprising of 1808 was a rebellion by the people of Madrid against the occupation by French troops. Madrid had been under the occupation of Napoleon’s army for over a month.

This uprising was among several spontaneous widespread riots that occurred without significant fore-planning or funding.

On 2 May a crowd began to gather in front of the Royal Palace in Madrid. Those gathered entered the palace grounds in an attempt to prevent the removal of the youngest son of King Charles IV of Spain.

The French commander sent a battalion of grenadiers to the palace along with artillery detachments. The French forces opened fire on the assembled crowd, and the rebellion began to spread to other parts of the city.

What followed was street fighting across several areas of Madrid as the poorly armed population confronted the French troops. The French general Joachim Murat imposed martial law in the city and assumed full control of the city.

The Spanish forces stationed in the city remained confined to barracks. In the uprising, many hundreds of people died in the fighting. “The Charge of the Mamelukes” portrays the street fighting that took place.

The repression following the crushing of the rebellion was harsh. Murat created a military commission that issued death sentences to all of those captured who were bearing weapons of any kind. In a statement issued, Murat said:

“The population of Madrid, led astray, has given itself to revolt and murder. French blood has flowed. It demands vengeance. All those arrested in the uprising, arms in hand, will be shot.”

Hundreds of prisoners were executed. Goya captured the scene in his painting “The Third of May 1808.” As the French had been attacked with a variety of improvised weapons, any craftsmen found with shearing scissors, kitchen knives, sewing needles, or other tools of their trade were summarily shot.

The Puerta del Sol, which is Spanish for “Gate of the Sun,” is a public square in Madrid. It is one of the busiest places in the city. This is the center of the radial network of Spanish roads.

The square also contains the famous clock whose bells mark the beginning of a new year broadcast live since1962.

Goya became the court painter to the Spanish Crown in 1786. His early career is marked by portraits of the Spanish aristocracy and royalty and Rococo style tapestry cartoons designed for the royal palace.

Artworks from the mid-period of his life were concerned with insanity, mental asylums, witches, fantastical creatures, and religious and political corruption. This subject matter reflected his fear for both his country’s fate and his own psychological and physical health.

The Second of May 1808 or The Charge of the Mamelukes. Francisco de Goya y Lucientes

“The act of painting is about one heart telling another heart where he found salvation.”
– Francisco Goya