“Portrait of Henry VIII of England” by Hans Holbein the Younger

“Portrait of Henry VIII of England” by Hans Holbein the Younger depicts the famous Tudor king in luxurious style endowed with considerable psychological depth. It is one of the iconic images of Henry and is one of the most famous portraits of any British monarch.

Holbein uses the frontal pose and positions his hands to convey the sitter’s forceful personality and royal bearing.

Portraiture was the most popular genre in sixteenth-century England, and Holbein was one of the few available, talented artists following the schism between the Church of Rome and the Church of England.

Hans Holbein the Younger, originally from Germany, had been appointed the English King’s Painter in 1536.

This painting shows Henry as young and healthy when, in reality, he was in his forties and had been severely injured earlier that year in a jousting accident.

The wound festered chronically for the remainder of his life and became ulcerated, thus preventing him from maintaining the level of physical activity he had previously enjoyed.

He became grossly obese, and this hastened his early death. Many historians have dismissed the speculation that he suffered from syphilis.

Henry recognized the power of the images Holbein created and encouraged other artists to copy the painting and distributed the various versions around the realm, giving them as gifts to friends and ambassadors.

Nobles would commission their copies of Holbein’s painting to show their loyalty to Henry. The many copies made of Holbein’s portraits gave Holbein’s depictions a lasting effect on Henry’s public image.

This painting is the only surviving depiction of Henry by Holbein that is not a copy. It may also have been a preparatory study for the more significant full-length representation, which was lost in a palace fire.

In this smaller painting, Henry wears much the same clothing as the lost full-length mural by Holbein. 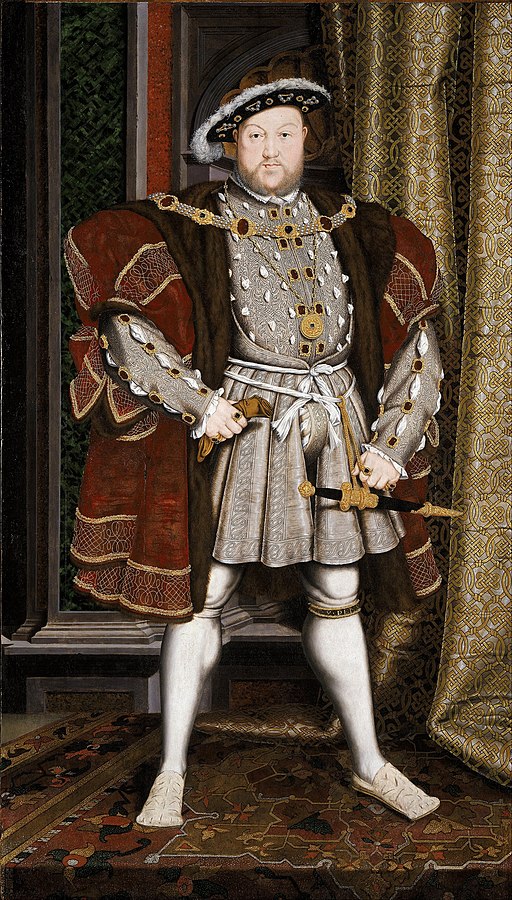 For many years this “Portrait of Henry VIII of England” by Hans Holbein the Younger, was owned by the Spencer family and housed at Althorp.

Financial problems forced the 7th Earl Spencer to sell much of the art collection, and Heinrich Thyssen purchased it. It now displayed at the Thyssen-Bornemisza Museum, Madrid, Spain.

His disagreement with the Pope on questions such as an annulment led Henry to initiate the English Reformation, separating the Church of England from papal authority.

He appointed himself the Supreme Head of the Church of England and dissolved convents and monasteries.

Henry was an extravagant spender, using the proceeds from the dissolution of the monasteries and acts of the Reformation Parliament. He also converted the money that was formerly paid to Rome into royal revenue.

Despite the money from these sources, he was continually on the verge of financial ruin due to his extravagance, as well as his numerous costly unsuccessful wars.

Holbein traveled to England in 1526 and was welcomed into the humanist circle of Thomas More, where he quickly built a high reputation. Later, he also worked under the patronage of Anne Boleyn and Thomas Cromwell.

By 1535, he was King’s Painter to King Henry VIII. His portraits of the royal family and nobles are a historical visual record of the court during the years when Henry was asserting his supremacy over the English church.

Portrait of Henry VIII of England

Hans Holbein, the Younger: ‘Portrait of Henry VIII of England’

How did Henry VIII show he was a powerful king?

Highlights of the Thyssen-Bornemisza Museum

“Two beheadings out of six wives is too many.”
– Henry VIII of England