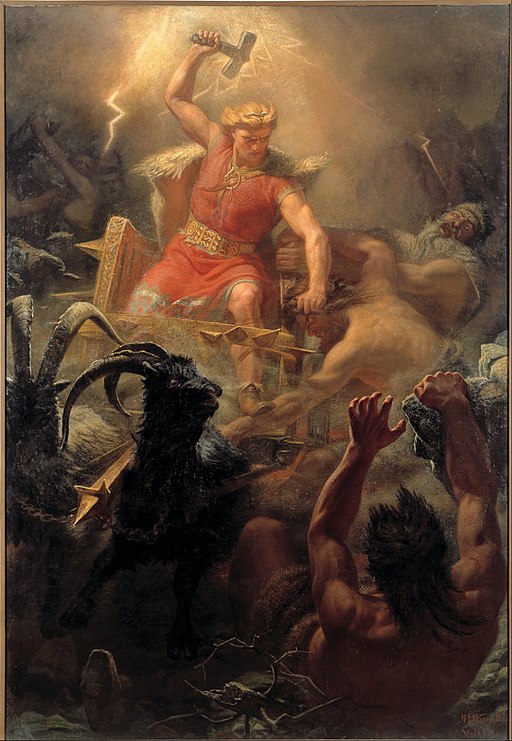 “Thor’s Fight with the Giants” by Mårten Eskil Winge

“Thor’s Fight with the Giants” by Mårten Eskil Winge depicts the Norse god Thor in a battle against the evil spirits called Jötnar. The thunder god is shown riding his chariot pulled by Thor’s loyal goats.

He is wearing his belt of power and swinging his hammer of thunder. Thor is depicted as strong, blond, brave, and fearless. The original audience of the 1870s interpreted the painting as a depiction of good battling evil.

In Germanic mythology, Thor is the hammer-wielding god associated with thunder, lightning, oak trees, the protection of humankind, and fertility.

This painting was created in 1872 and became popular among contemporary nationalists. Unfortunately, the meaning of the picture has shifted from being a symbol of liberty and enlightenment to become a symbol for xenophobia.

The swastika symbol on Thor’s belt has added to the symbolism for the right-wing extremists.

For many artists, before the Nazi party’s adoption of the symbol, the swastika was an ancient decorative symbol for the sun, appearing in architectural decoration and various motifs.

Thor was a prominent god throughout the recorded history of the Germanic peoples. His influence extended from the Roman occupation of regions of Germania to his high popularity during the Viking Age.

Even in the face of the Christianization of Scandinavia, emblems of his hammer, Mjölnir, were worn.

Into the modern period, Thor is frequently referred to in place names, and the day of the week, Thursday bears his name.

Thor has inspired numerous works of art and references to Thor, continues to appear in modern popular culture.

Like other Germanic deities, veneration of Thor has been revived in the modern period in Germanic Neopaganism.

Mårten Eskil Winge (1825 – 1896) was a Swedish artist. He was associated with the Düsseldorf school of painting.

His art was influenced by the Norse mythology themes, a professor at the Royal Swedish Academy of Arts.

Tor’s Fight with the Giants

How Thor got his hammer

The myth of Thor’s journey to the land of giants

“Whosoever holds this hammer, if he be worthy, shall possess the power of Thor.”
– Stan Lee