This Plastered Human Skull is a reconstructed human skull that was made in the ancient Levant about 9,000 BC in the Pre-Pottery Neolithic period.

It represents one of the oldest forms of art in the Middle East and the earliest examples of sculptural portraiture in the history of art.

This prehistoric artifact is representative of the earliest forms of burial practices in the southern Levant and demonstrates that some cultures took great care in burying their ancestors below their homes.

The human skull was removed from the body, and its cavities filled with plaster and painted. To create more life-like faces, shells were inset for eyes, and paint was used to represent facial features, hair, and mustaches.

Plastered skulls from the Pre-Pottery Neolithic period provide the earliest evidence of arts and religious practices in the ancient Near East.

This Plastered Human Skull was created by the Pre-Pottery Neolithic B culture. It was centered in upper Mesopotamia, during 8,800–6,500 BCE. Archeologist Kathleen Kenyon identified and classified this period during her archaeological excavations at Jericho in the West Bank.

Culturally this period differs from that of the earlier Pre-Pottery Neolithic A period due to the more significant domestication of animals to supplement their earlier mixed agrarian and the hunter-gatherer diet.

During this period, it was common to separate the skull from the skeleton before burial. In several sites in the Levant, such skulls had facial features modeled in layers of plaster.

They were found in separate burials below house floors, and may also be indicative of ancestor worship. 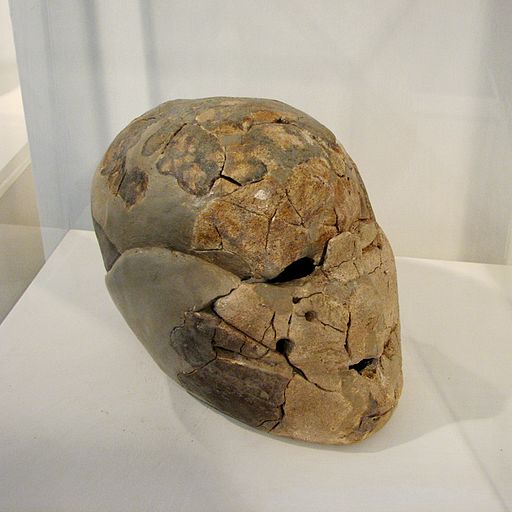 Kathleen Kenyon (1906 – 1978) was a British archaeologist of Neolithic culture in the Fertile Crescent and one of the most influential archaeologists of the 20th century.

She led excavations of Tell es-Sultan, the site of ancient Jericho, from 1952 to 1958. Her work at Jericho made her world-famous and established a lasting legacy in the archaeological methodology of the Levant.

Ground-breaking discoveries concerning the Neolithic cultures of the Levant were made in this ancient settlement of Jericho.

Tell es-Sultan, also known as Tel Jericho, is the site of ancient and biblical Jericho and an important archaeological site in the West Bank.

The tell was inhabited from the 10th millennium BCE and has been called “the oldest town in the world,” with many significant archaeological finds.

The first permanent settlement on the site developed between 10,000 and 9000 BCE.  It became a popular camping ground for Natufian hunter-gatherer groups due to the nearby Ein as-Sultan spring.

The “Pre-Pottery Neolithic A” phase at Tell es-Sultan (8500 – 7500 BCE) saw the emergence of one of the world’s first significant proto-cities.

As the world warmed up, a new culture based on agriculture and sedentary dwelling emerged, which archaeologists have termed “Pre-Pottery Neolithic A.” During this period, villages are characterized by small circular dwellings.

The burial of the dead was under the floor of buildings, and survival relied on hunting wild game, the cultivation of wild or domestic cereals.

Later the “Pre-Pottery Neolithic B” settlement featured rectilinear buildings made of mudbricks on stone foundations and the domestication of animals.

Artifacts dating from this period include plastered human skulls, painted to reconstitute the individuals’ features were found at the site, and are now preserved at the British Museum.

“The soul becomes dyed with the color of its thoughts.”
– Marcus Aurelius