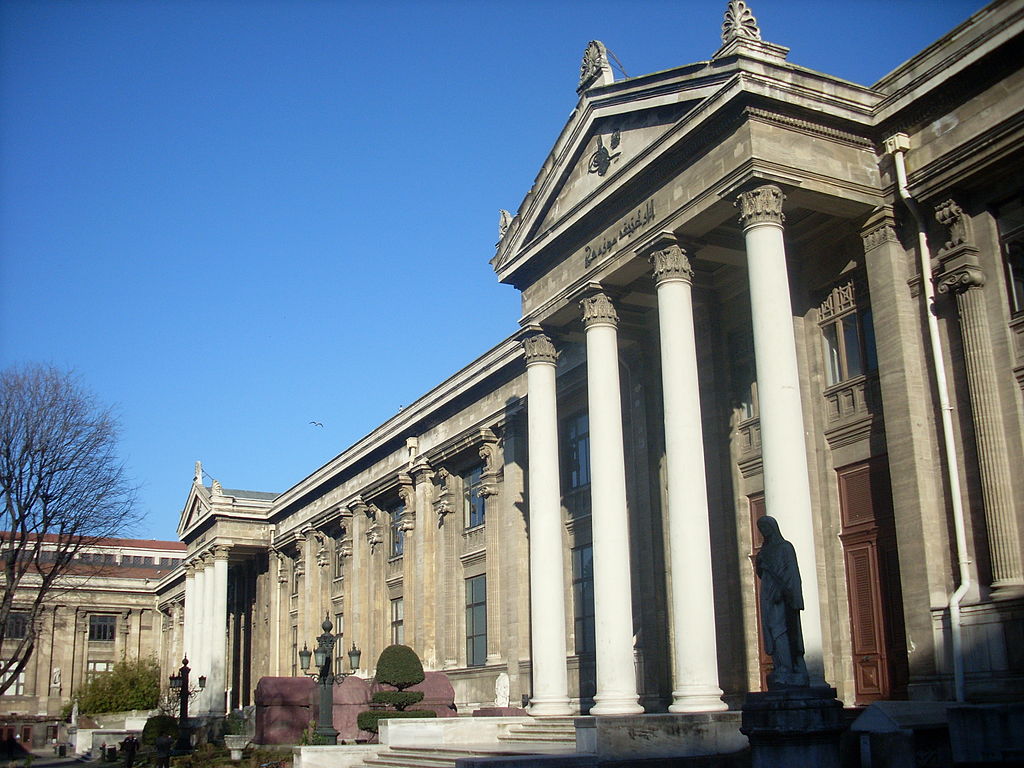 The Istanbul Archaeology Museums consists of three museums: the Archaeological Museum, the Museum of the Ancient Orient and the Tiled Pavilion Museum or Museum of Islamic Art.

The three museums all together house over one million objects that represent almost all the eras and civilizations in world history.

A Virtual Tour of the Istanbul Archaeology Museums

The museums were initially founded by imperial decree as the Imperial Museum in 1891 and formed part of the Topkapı Palace outer gardens.

An Ottoman Empire decree was enforced to protect cultural goods, and governors from the provinces were required to send artifacts to the Imperial Museum. This decree allowed the museum to amass a sizeable and impressive collection.

The Tiled Kiosk was commissioned by Sultan Mehmed II in 1472 and is one of the oldest structures in Istanbul featuring Ottoman architecture.

It was a part of the Topkapı Palace outer gardens and was used as the Imperial Museum before the collection moved to the newly constructed main building.

The construction of the main building in its present neo-Greek form was completed in 1908. It is one of the prominent structures built in the neoclassical style in Istanbul.

The façade of the building was inspired by the Alexander Sarcophagus and Sarcophagus of the Mourning Women, both housed inside the Museum.

The Museum of the Ancient Orient was commissioned in 1883 as a fine arts school. Later it was reorganized as a museum, which opened in 1935. The Tiled Kiosk was opened to the public in 1953 as a museum of Turkish and Islāmic art and was later incorporated into the Istanbul Archaeology Museum.

Highlights of the Istanbul Archaeology Museums

The “Alexander Sarcophagus” is a Hellenistic stone sarcophagus adorned with bas-relief carvings of Alexander the Great.

Classical Greek sculptors created the marvelous Hellenistic sculptures in the Athenian idiom during the late 4th century BC.

The most significant sculptured scene is of Alexander the Great attempting to battle the Persian king, Darius III, as Darius flees the battle of Issus in 333 BC.

The Alexander Sarcophagus is one of four massive carved sarcophagi discovered during the excavations at the necropolis near Sidon, Lebanon, in 1887.

The Sarcophagus was probably created for a wealthy and influential noble or governor of the region.

The “Tabnit Sarcophagus” was created for King Tabnit of Sidon, a Phoenician ruler. Carved in the early 5th century BC, has two separate inscriptions, one in Egyptian hieroglyphics and one in the Phoenician script.

Discovered in 1887 at a Necropolis near Sidon together with the Alexander Sarcophagus and other related sarcophagi. Tabnit’s body was found floating perfectly preserved in the original embalming fluid.

The tombs were discovered in 1887, and the curator of the Istanbul Archaeological Museum arranged for full excavation and the transfer of the sarcophagi to Istanbul.

During the excavation, the workmen opened the Tabnit sarcophagus and found: “a human body floating in perfect preservation in a peculiar fluid.”

The “Siloam Inscription” or “Shiloah Inscription” (כתובת השילוח) is a passage of inscribed text found in the Siloam tunnel, in the City of David in the East Jerusalem neighborhood of Shiloah.

The ancient tunnel was constructed to bring water from the Gihon Spring to the Pool of Siloam.

The ancient city of Jerusalem was located on a mountain, which made it defensible from almost all sides. Unfortunately, its primary source of freshwater was on the outside of the cliff wall.

The Bible records that King Hezekiah, concerned that the Assyrians would lay siege to the city, blocked and hid the spring’s water outside the city. He also diverted it through a channel into the Pool of Siloam.

The peace treaty is the earliest example of any written international agreement of any kind. It followed the Battle of Kadesh fought some sixteen years earlier. The text concludes with a binding oath.

The Archaeology Museum is located on the road leading up to Topkapı Palace just to the right of the entrance gate to Gülhane Park.

The Istanbul archaeology museum hours are from Tuesday-Sunday but confirm with the museum website for the latest updates changes on operating days and hours.

The main building of the museum can easily be distinguished with its Neo-classical style and represents the first modern museums in Turkey.

The top floor of the building houses artifacts such as pottery, ancient statues, coins, rings, and medals. On another level is the home of masterpiece statues, the collection of ancient sarcophagi.

On the bottom floor are historical royal coffins found and sculptures dating from ancient eras up to the Byzantine era.

The Ottoman Sultan Mehmet commissioned the Tiled Kiosk in 1472 is one of the oldest examples of Ottoman architecture in Istanbul. It was used as the Empire Museum between 1875-1891.

After the transfer of non-Islamic art to the Istanbul Archaeology Museum, it was opened the o public in 1953 with Turkish and Islamic works as the primary focus.

The Tiled Kiosk is a pavilion set within the outer walls of Topkapı Palace as a pleasure palace or kiosk. It is located in the outermost parts of the palace, next to Gülhane Park. The pavilion has many examples of İznik tiles and Seljuk pottery.

The Ancient Orient Museum was founded in 1917 and is a single floor building, and the artifacts are categorized according to their origin and civilization.

Historical sites near the Archaeological Museum

Map to the Istanbul Archaeology Museums

“He who stands up in anger sits down with a loss.”
– Turkish Proverb