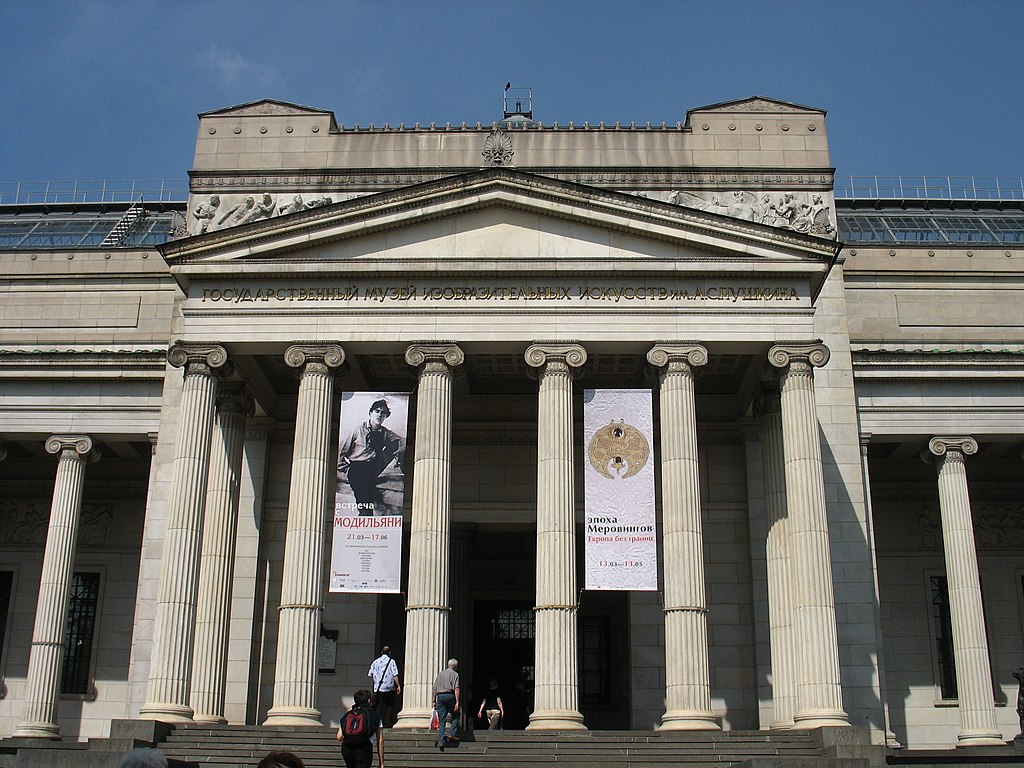 The Pushkin State Museum of Fine Arts is the largest museum of European art in Moscow.

The museum’s current name had no direct associations with the famous Russian poet Alexander Pushkin, other than as a posthumous commemoration of his name and fame when it was renamed in his honor in 1937, on the 100th anniversary of his death.

Highlights Tour of the Pushkin Museum

“Bucentaur’s return to the pier by the Palazzo Ducale” by Canaletto depicts the Doge’s golden vessel, the Buccentoro returning to the pier during a prestigious Venetian Festival.

The busy canal with its gondolas crowding in on the festival is contrasted with the splendor of Venice.

In exquisite detail, we can see St Mark’s Cathedral, the arcades of St Mark’s library, the gothic lace of the Doge’s palace, the long granite columns and the palazzos.

The Diadem from “Priam’s Treasure” at the Pushkin Museum is part of what became called the “Treasure of Priam” discovered in the ancient site of Troy, which is in modern-day Turkey.

“Priam’s Treasure” is a cache of gold and other artifacts discovered by Heinrich Schliemann in 1873. The objects are spread across multiple museums.

“Seagulls, the River Thames and the Houses of Parliament” by Claude Monet

The Houses of Parliament by Claude Monet is one in a series of paintings of the Palace of Westminster, home of the British Parliament, created during the early 1900s while Monet stayed in London.

All of the series’ paintings share the same viewpoint from Monet’s terrace at St Thomas’ Hospital overlooking the Thames and the about similar canvas size.

They depict different times of the day and weather conditions.

“Not to work” by Paul Gauguin

“Not to work” by Paul Gauguin depicts two young Tahitians passing the time idling in a hut smoking. Through the window, we can the artist painting outdoors.

The painting symbolizes the relaxed, natural, and contemplative lifestyle of the Tahiti islanders compared to Gauguin’s need to creat.

Gauguin is now recognized for his experimental use of color and a style that was distinctly different from Impressionism.

“Horse Attacked by a Jaguar” by Henri Rousseau is jungle paintings depicting a Jaguar attacking a white horse painted with meticulous care.

The horse stares transfixed in a strange contrast of white against lush green.

Rousseau’s fantastic scenes heralded Surrealism and were built up meticulously in layers, using a large number of green shades to capture the lush abundance of the jungle.

“Seascape at Saintes-Maries” by Vincent van Gogh shows the artist’s fascination with the variable color of the sea. His composition emphasized the boat’s fragility against the stormy water.

This painting captures visually the following quote by Van Gogh: “The fishermen know that the sea is dangerous and the storm terrible, but they have never found these dangers sufficient reason for remaining ashore.”

Van Gogh stayed in Saint-Marie, for five days, and he executed three oil paintings and nine drawings. His emotional experience is best embodied in this picture, which is written in paint, by replicating his windy views of the sea.

“Portrait of Doctor Félix Rey” by Vincent van Gogh depicts the trainee doctor at Arles Hospital, where Van Gogh was taken for treatment of his mental illness.

After cutting off part of his left ear in December 1888, Vincent van Gogh was taken to the hospital of Arles and placed in the care of Doctor Felix Rey. Dr. Rey was a 23-year-old intern at the time.

This portrait is distinguished by its bright color, flatness, and the absence of modeling. The decorative background of the wallpaper with orange ornamental curls on green presents the doctor in a non-clinical setting.

Doctor Félix Rey is presented with a full face and a carefully and neatly trimmed beard with an elegantly curved mustache.

He is presented sympathetically in his fashionable blue jacket, orange buttons, a striped tie, and a green vest.

“The Red Vineyard” by Vincent van Gogh depicts workers in a vineyard and it is the only painting van Gogh sold during his lifetime.

Van Gogh uniquely captured the mellowed tones and glistening light of the evening sun reflecting in the river and the autumn fields.

This painting was painted two weeks after Gauguin arrived in Arles and moved in with Van Gogh. Van Gogh was excited by his idea of starting an artists’ colony. He was keen to share his studio with Gauguin.

The two artists had met two years previously, and Van Gogh was in awe of Gauguin. The relationship, however, ended in disaster culminating in Van Gogh’s self-mutilation.

However, before this incident, the two artists worked on similar projects, and Gauguin influenced Van Gogh’s paintings of this time.

The Gauguin’s colorful works inspired Van Gogh to use more colors for this painting, which he continued to do in his later works.

Van Gogh painted this canvas, while Gauguin was painting scenes with Breton Women, clothed in the traditional costumes.

Van Gogh was particularly delighted with a vineyard, whose colors were turning to autumnal reds and yellows.

A Virtual Tour of Museums in Russia

Map for the Pushkin Museum

“There is no subject so old that something new cannot be said about it.”
– Fyodor Dostoevsky