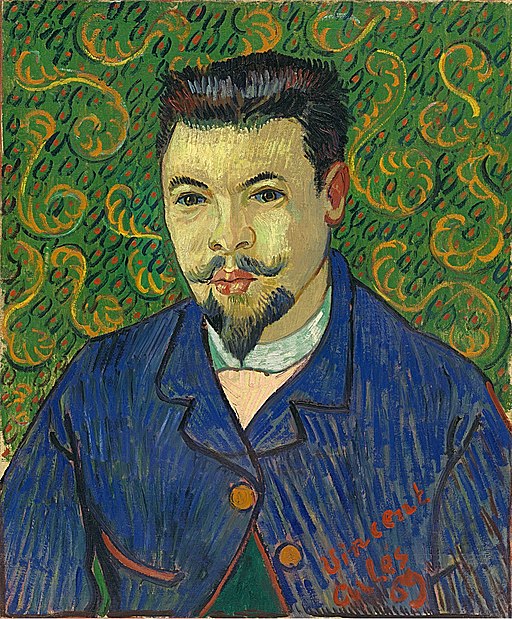 “Portrait of Doctor Félix Rey” by Vincent van Gogh depicts the trainee doctor at Arles Hospital, where Van Gogh was taken for treatment of his mental illness.

After cutting off part of his left ear in December 1888, Vincent van Gogh was taken to the hospital of Arles and placed in the care of Doctor Felix Rey. Dr. Rey was a 23-year-old intern at the time.

This portrait is distinguished by its bright color, flatness, and the absence of modeling. The decorative background of the wallpaper with orange ornamental curls on green presents the doctor in a non-clinical setting.

Doctor Félix Rey is presented with a full face and a carefully and neatly trimmed beard with an elegantly curved mustache. He is presented sympathetically in his fashionable blue jacket, orange buttons, a striped tie, and a green vest.

The painting was executed with dynamic strokes that formed a dynamic pictorial image.

Doctor Felix Ray (1865–1932) proved to be one of Vincent’s more sympathetic doctors. He cared about the health and well-being of his patient.

During van Gogh’s stay in the hospital, the artist befriended the attending physician, who showed interest in his work. To thank the doctor, Van Gogh decided to paint his portrait.

The artist executed the portrait in January 1889, and Vincent gave his doctor the picture as a gift. The portrait was remarkable for its resemblance to Dr. Rey, but while he was appreciative, he never really liked the painting.

Dr. Ray graciously accepted his patient’s present; however, despite the van Gogh’s efforts, he never became a fan of his work.

The simplicity of the composition and the brightness of the harmonized colors presents a self-confident and personal portrait. However, the doctor was indifferent to art and considered the portrait the result of the artist’s unhappy, mental illness.

In 1929, Dr. Félix Rey commented on the portrait Vincent van Gogh had painted of him:

“When I saw that he outlined my head entirely in green, that he painted my hair and my mustache, I really did not have red hair, in blazing red on a biting green background; I was simply horrified.”

The painting was kept in the attic and later covered a hole in the chicken coop. In 1900, the artist Charles Camoen re-traced the footsteps of Van Gogh to Arles, wherein the courtyard of Dr. Ray, he discovered this portrait.

The doctor parted with the portrait, selling it for a nominal amount. Today the portrait is housed at the Pushkin Museum and estimated to be worth over $50 million.

Doctor Felix Ray eventually became a specialist on tuberculosis. He was awarded the silver medal from the Ministry of the Interior for his work during a cholera epidemic.

In late 1888, Van Gogh’s mental health deteriorated, and he became alarmingly eccentric. This period culminated in an altercation with Paul Gauguin following which Van Gogh cut off part of his left ear.

He was then hospitalized in Arles twice over a few months. The hospital diagnosed his condition as “acute mania with generalized delirium.”

Dr. Félix Rey suggested there might be “a kind of epilepsy” involved that he characterized as mental epilepsy.

In January 1889, he returned to the Yellow House but spent the following month between hospital and home suffering from hallucinations and delusions that he was being poisoned.

In April 1889, he moved into rooms owned by Dr. Félix Rey, after floods damaged his rooms and paintings at his home. Around this time, he wrote,

In May 1889, he left Arles for the Saint-Paul asylum in Saint-Rémy-de-Provence, having understood his mental fragility.

There is no agreement today over a modern diagnosis of Van Gogh’s illness. Suggestions include epilepsy and bipolar disorder, exacerbated by excessive absinthe drinking, heavy smoking, and venereal disease.