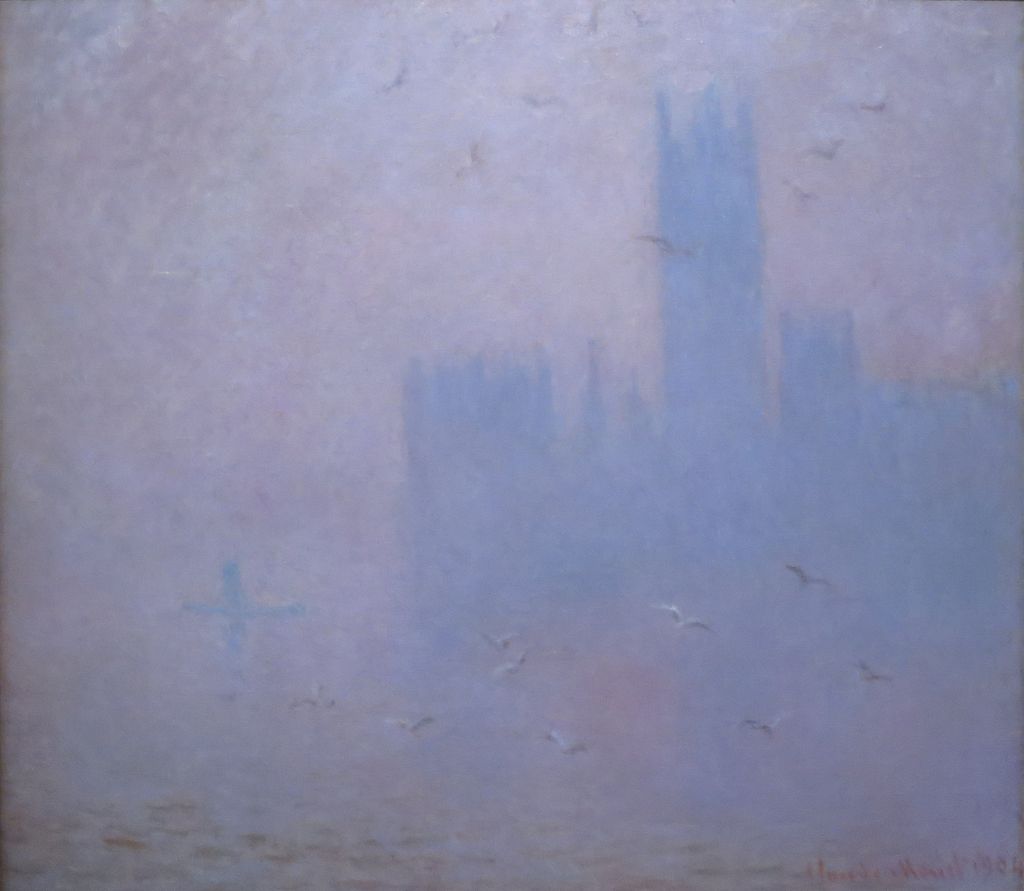 “Seagulls, the River Thames and the Houses of Parliament” by Claude Monet

The Houses of Parliament by Claude Monet is one in a series of paintings of the Palace of Westminster, home of the British Parliament, created during the early 1900s while Monet stayed in London.

All of the series’ paintings share the same viewpoint from Monet’s terrace at St Thomas’ Hospital overlooking the Thames and the about similar canvas size. They depict different times of the day and weather conditions.

This painting’s viewpoint was close to that of J. M. W. Turner’s paintings of the fire that had destroyed much of the old Parliament complex in 1834. James McNeill Whistler’s works of the Thames also inspired Monet.

By the time of the Houses of Parliament series, Monet had ceased his earlier practice of completing a painting on the spot in front of the subject.

Monet continued refining the images back at his home base in France and sometimes used photographs to help in his task.

Some purists criticized this new approach, but Monet replied that his means of creating work was his own business, and it was up to the viewer to judge the result.

Monet produced nearly a hundred views of the Thames River in London. He painted Waterloo Bridge and Charing Cross Bridge from his room in the Savoy Hotel and the Houses of Parliament from Saint Thomas’s Hospital.

Monet’s first painting series exhibition in 1891 was of fifteen Haystack paintings, painted from different points of view and at different times of the day.

Two years later, he produced twenty-six views of Rouen Cathedral. In this series, Monet also experimented with cropping the Cathedral so that only certain parts of the façade is depicted on the canvas.

Again these paintings focused on the effects of light and shade in the composition. Monet traveled to the Mediterranean, where he painted landscapes, and seascapes, including a series of paintings in Venice.

In London, he painted four series: the Houses of Parliament, London, Charing Cross Bridge, Waterloo Bridge, and Views of Westminster Bridge. Other series by Monet include Poplars, Mornings on the Seine, and the Water Lilies.

River Thames and the Houses of Parliament by Claude Monet

Highlights of the Pushkin Museum

London Fog and the Impressionists